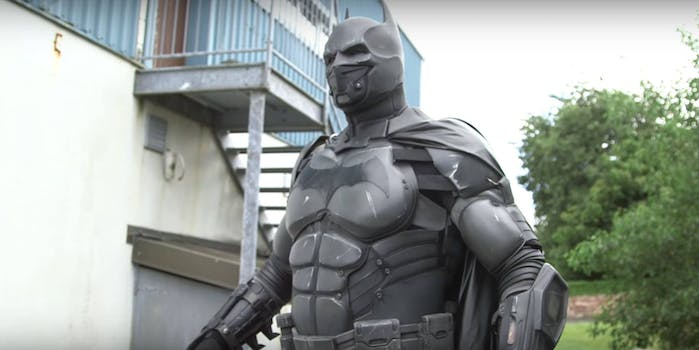 Featuring 23 working gadgets, this cosplay is worthy of the real Batman.

A few fans have experimented with functioning Batman cosplay armor in the past, but none have lived up to the slightly terrifying standards of professional costumer Julian Checkley. Armed with years of costume building experience and an in-depth knowledge of the game Arkham: Origins, he created a batsuit with 23 working gadgets.

Checkley’s costume now holds the Guinness World Record for “most functional gadgets on a cosplay suit,” featuring a range of weapons and toys including a bluetooth tracking batarang, fireball shooter, and video screen gauntlet.

You can check out the whole suit in this video from Guinness World Records, including some demonstrations from the suit’s delightful nerdy creator.

Since Ben Affleck‘s Batman is mostly armed with guns and chunky body armor, this cosplay version may be better prepared than the “real” thing. The DC movie franchise might benefit from fewer devastating explosions, and more cameo appearances from things like the shark repellent bat-spray.