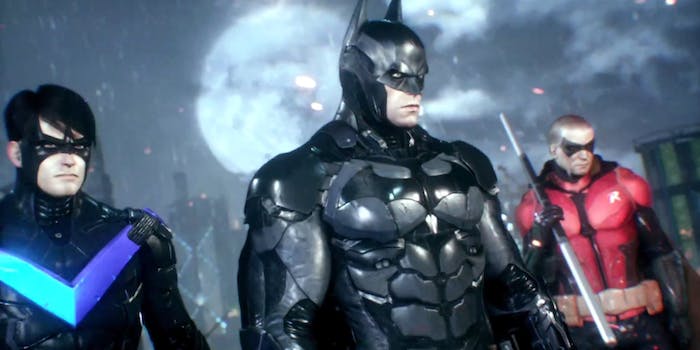 Players can switch seamlessly between Batman and the other heroes.

It’s a good thing Batman will have help as he fights what appears to be a professional army tearing through Gotham City.

The newest trailer for the video game Batman: Arkham Knight reveals that Robin, , and Catwoman will all support the Dark Knight while he blows up tanks with the Batmobile (so much for Batman not using guns), takes down huge armored dudes sporting chainguns, and fights what looks like a robot Batman.

Other than Batman’s usual accomplices, the new trailer also shows off the assassin Azrael, who’s been factoring into the Batman comic-book universe since the early 1990s.

Don’t assume from the trailer that the game will feature a co-op mode. Eurogamer reports that players will be able to switch back and forth between Batman and an accompanying ally during fight scenes, as in a tag-team match.

Batman: Arkham Knight will be released for PC, PlayStation 4, and Xbox One on June 23.