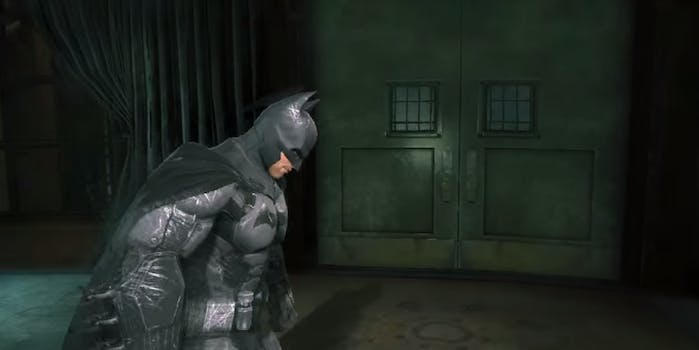 PC version of Batman: Arkham Knight is an absolute mess

'Batman: Arkham Knight' is a runaway success—unless you have the PC version.

It seemed silly when earlier this week game developer Bethesda Softworks had to clarify that the PC version of Fallout 4 would not be hindered graphically on PC. Meaning that PC users could up graphics settings to allow for better frame rates. But fans demanded full transparency and clarity, in light of another recently minted PC game.

Batman: Arkham Knight launched Tuesday, and many gamers on consoles are having tons of fun rolling through the streets of Gotham. Reviews for the game have been highly positive, sitting at a 91 on Metacritic. Interestingly, reviewers were only sent PlayStation 4 builds of the game. This could have been because of a marketing deal between Sony and Warner Bros. Or it could have been because the PC version of the game has not been performing as expected.

With the Internet outrage on gaming forum NeoGAF, Reddit, and Twitter, the latter would not be surprising.

What exactly is the problem? PC gamers were stunned to see that graphics options for the game were severely limited. Most PC games allow users to tweak every detail; here the list of options for the PC version were barren. But probably the main notable omission was the lack of frame rate adjustment. The PC version of the game had been locked to 30 frames per second.

It is possible to adjust the frame rate by going into the .ini file, but definitely not ideal. Even when changing it to 60 frames per second, users are reporting tons of issues, from frame rate drops to crashes.

This is made all the more annoying because leading up to the game, Nvidia put out a trailer for Arkham Knight clearly showing the game running at 60 frames per second. It’s possible that the company could have used some video magic to convert 30 fps video into 60, but that’s all speculative. Either way, it’s definitely not an accurate portrayal of the game’s actual performance.

Many are blaming poor performance on poor optimization from the porting studio Iron Galaxy. But what if it could also be because some user’s $600 graphics cards from last year simply aren’t cutting it? Well, that’s not looking to be the case either.

User PrintedCrayon on NeoGAF is reporting numerous crashes with his or her Nvidia GTX 980 Ti graphics card. It’s a recently released card that retails for around $650. Considering the recommended specifications from Rocksteady and Warner Bros. only demand an Nvidia GeForce 760, a card that usually runs in the ballpark of $300, some communication lines were clearly crossed. This is made all the more evident because recommended system requirements were updated mere hours before the game’s launch.

But lets play devil’s advocate and assume the buttery smooth video above was being played on a high-end PC with multiple graphics cards.

What’s even more annoying is that memory leaks are apparently causing the game to crash. Memory leaks happen when a program fails to return memory with prolonged use. This means that a computer’s RAM continues to get flooded with more and more information until the program crashes.

Users are still trying to dig around to find exactly why the game is having so many issues. Some are blaming Denuvo DRM. It’s an anti-piracy measure that some games implement to stop thieves. But according to Eurogamer, in an interview with Denuvo, the company holds firm that its anti-tamper technology does not hinder performance.

It’s gotten so upsetting that some users are recommending others get the PS4 version of the game instead. When comparing gameplay videos the game runs much better than even the most expensive of PCs, minus the cool Nvidia rain and smoke effects.

This is not looking good on either Warner Bros. or Rocksteady. The game is being torn apart on Steam with many reviewers pointing out a multitude of performance issues. Luckily for users, Steam has introduced a refund program, so many who purchased the game should be able to get their money back.

At least Rocksteady has acknowledged the issue and is working with Iron Galaxy to find a solution as quickly as possible. In a forum post the studio noted that it’s “aware that some users are reporting performance issues with the PC version of Batman: Arkham Knight. This is something that Rocksteady takes very seriously. We are working closely with our external PC development partner to make sure these issues get resolved as quickly as possible.”