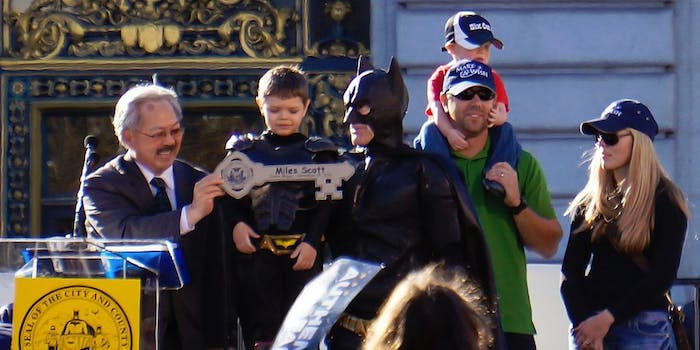 Julia Roberts is adapting Batkid’s heroic story into a movie

Batkid's IRL exploits tugged on our heart strings. Now Julia Roberts is making them into a movie.

Julia Roberts is making a Batkid movie. And no, this isn’t yet another comic book adaptation. It’s based on the true story of a 5-year-old leukemia patient who, thanks to the Make-A-Wish foundation, was able to become Batman‘s sidekick for a day.

Batkid (whose real name is Miles Scott) captured our hearts and in November 2013 when the Bay Area Make-A-Wish turned San Francisco into Gotham City. He got to drive around in the Batmobile, defeat various supervillains, and was eventually presented the keys to the city by the mayor himself.

His heartwarming story went viral online as it unfolded in real life, culminating in a documentary called Batkid Begins. In the trailer, you can see Miles’ father compare the battle against leukemia to Batman’s battle against evil.

Now, Julia Roberts has optioned the rights to make Batkid’s story into a feature film, essentially a dramatized remake of Batkid Begins. Roberts also intends to star in the movie, possibly as the Make-A-Wish Foundation’s San Francisco chapter director Patricia Wilson, who organized the city-wide effort to give Miles Scott a perfect day as Batkid.