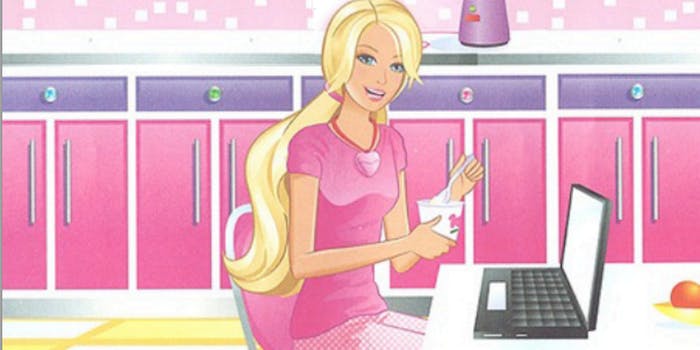 The author is a self-declared feminist who works in the tech industry herself. And yet.

The Internet discovered the sexist Barbie book that teaches girls they can’t really be computer programmers and engineers this week. The response was swift and often caustic: in the middle of the positive remixes, parodies, and outraged reviews, one woman was afraid to open her email.

That woman was the book’s author, Susan Marenco.

Marenco spoke to Kids Tech News (KTN) and ABC News on Wednesday about the experience of waking up Tuesday morning to a deluge of email from outraged readers of a book she had written nearly two years ago.

For a woman who views herself as a feminist and a member of the tech industry—Marenco once worked for Microsoft—it must have been a surreal experience.

Then again, perhaps the current climate of tech culture, rife with systemic sexism, prepared her for the backlash. “It’s a boy’s game,” Marenco told KTN about the Silicon Valley environment in which she works. Perhaps that explains why this “feminist” tech writer could write a book called I Can Be an Engineer which nonetheless has no actual example of Barbie coding, and instead bizarrely states she will needs boys’ help to actually code the game she designed.

Marenco blamed Mattel for the way the book turned out, pointing out to ABC that the assignment explicitly called for Barbie to be a designer, rather than a developer or a programmer. She offered no explanation for how a book explicitly portraying Barbie as a designer ended up with the word engineer in the title.

They can’t get out of that groove of ‘she’s nice, she doesn’t show anger, she doesn’t show frustration.’ When I write something, I had many editor’s comments like ‘she has to be more polite’… They can’t make her lose that terminal sweetness that she has.

Marenco, who has written between 40-50 Barbie books for Mattel and Random House, now speculates that the company won’t ask her to write more. She believes the outraged public has channeled their anger in the wrong direction: Mattel is the source of the Barbie stereotype, and as a writer and a tech editor, Marenco claims she actively tries to avoid falling into the trap of writing such a dated character. “I try to replace the professional white males with Asian females,” she told KTN.

To ABC, she added, “No one does this maliciously.”

Marenco appeared baffled that the editors of the book she wrote didn’t pick up on the sexist overtones. Yet while musing to ABC that her editors weren’t more attentive, she failed to explain her own logic.

If I was on deadline, it’s possible stuff slipped out or I quietly abided by Mattel without questioning it. Maybe I should have pushed back, and I usually I do, but I didn’t this time… Maybe I should have made one of those programmers a female – I wish I did.

Mattel said in a Facebook statement Wednesday that the book was actually published four years ago and no longer reflected their corporate values; however, this statement seems to be incorrect, since the book has an official publication date of July 2013. Marenco told KTN that the first emails about the book didn’t occur until 2011.

Mattel has promised that “All Barbie titles moving forward will be written to inspire girls’ imaginations and portray an empowered Barbie character.” Yet as KTN pointed out, Barbie’s billion-dollar revenue doesn’t give it much incentive to change, even compared with its overall growth stagnation.

Still, the wrath of the Internet is a powerful driving force for change. Let’s just hope the outcry genuinely reaches Mattel’s corporate decision-makers—instead of merely knocking Marenco off her feet.