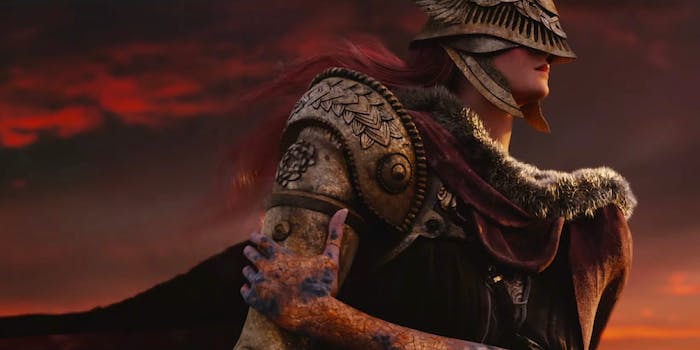 E3 officially kicks off on June 11.

Update 11:24am CT, June 10: During its E3 conference on Sunday, Microsoft confirmed and unveiled the first look at Elden Ring (along with the involvement of George R.R. Martin and Hidetaka Miyazaki) with a teaser trailer that hints at some of the game’s more fantastical elements.

In an interview that appeared on Xbox’s official blog, Miyazaki described Elden Ring as a “third-person RPG” that will focus more on the RPG elements of the game.

As for working with Martin, Miyazaki, who is a fan of Martin’s work—he even recommends that new employees read Martin’s Fevre Dream—initially expected Martin to turn him down after reaching out to collaborate on a game. Instead, Martin significantly contributed to the game’s mythology.

The actual collaboration itself begun with Mr. Martin ever so politely confirming what sorts of themes, ideas as well as many game-related aspects I had envisioned for the game.

This allowed us to have many free and creative conversations regarding the game, in which Mr. Martin later used as a base to write the overarching mythos for the game world itself.

This mythos proved to be full of interesting characters and drama along with a plethora of mystical and mysterious elements as well. It was a wonderful source of stimulus for me and the development staff.

Elden Ring’s world was constructed using this mythos and stimulus as a base. Even I myself find it hard to contain my excitement from time to time. We hope that everyone else is looking forward to the world we have created.

Prior to E3 2019 conferences, which begin on June 11, a leak through Japanese game company Bandai Namco’s website has revealed a litany of major releases.

Among the leaks is a game in development by FromSoftware, the developer of the Dark Souls franchise and Bloodborne, made in collaboration with George R.R. Martin. Martin is best known for being the author of the A Song of Ice and Fire book series, which was adapted into Game of Thrones.

Yes, like many of us, it seems that George R.R. Martin has put off writing deadlines to mess around with a video game for a while. The game is titled Elden Ring and even though details are sparse, we do know that it is an action RPG being developed for the PS4, Xbox One, and PC.

ALSO ME: We're never getting Winds of Winter. pic.twitter.com/r8aTlQGQzO

The leak was caused by a security flaw on Bandai Namco’s website which allowed the general public to fully access the games’ pages without a password.

The flaw was that anyone could access Bandai Namco's game pages for the 3 titles that leaked, without needing a password or anything.

That's how the 3 games leaked. They were posted on 4chan, discord and twitter before making their way to forums and news outlets.

With E3 not officially kicking off until Tuesday, this leak seems to be a logistical nightmare for Bandai Namco.