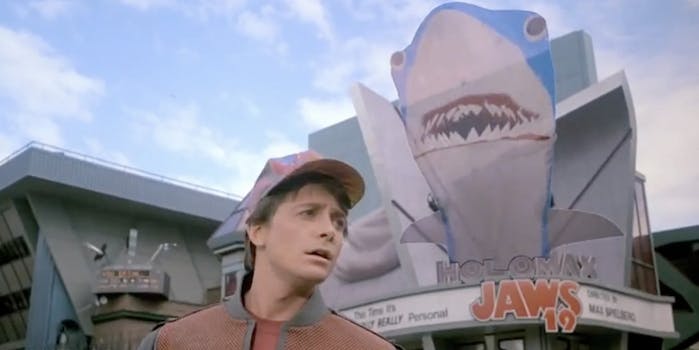 In our world of endless sequels and reboots, this trailer for 'Jaws 19' is all too plausible.

This month marks the date in Back to the Future when Marty McFly arrived in the “future” of 2015, in a move that predicted flat-screen TVs, hoverboards (more or less), and video chat.

However, there’s one famous Back to the Future II reference that never came true: the continuation of the Jaws franchise. While we’re obviously neck-deep in sequels and reboots in 2015, we never did get to see Jaws 19.

So Universal Pictures decided to mock up a fake trailer to celebrate Back to the Future Day, complete with descriptions of the previous 18 Jaws movies. Those sequels all sound worryingly plausible.

Photo via Back To The Future II/Imgur