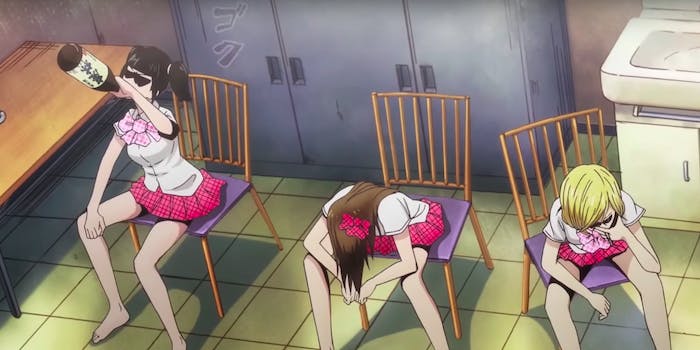 ‘Back Street Girls: Gokudols’ is ugly, inside and out

The transphobic anime fails to be subversive or funny.

Back Street Girls: Gokudols desperately wants to be a subversive comedy. Subversive stories turn societal norms on their heads and challenge our preconceived notions. Comedies, quite simply, make us laugh. The deep-seated transphobia of Back Street Girls, however, undermines its subversive premise, while it fails as a comedy by being plain unfunny.

The basic setup behind Back Street Girls is simple: Three yakuza brothers must make up for an expensive mistake by undergoing gender confirmation surgery and becoming underground J-pop idol singers in nerd haven Akihabara. As idols, they not only perform concerts for adoring—and often creepy—male fans, but also appear on radio shows and go to local restaurants to sample their food. Like all good subversive comedies, the show delights in the uncomfortable and the bizarre, but the big question remains—at whose expense?

More often than not, the answer is unfortunately: trans women.

Forced gender transition stories almost always have a rotting germ of transphobia at their core, which spreads and infects every other aspect of the story. It suggests that being perceived and treated as a woman is the worst possible thing that can happen to a man. It plays into the increasingly popular fear that gender transition is foisted on people who really may just be gender nonconforming, or the transphobic belief that trans women are actually men in disguise trying to trap unsuspecting straight men. Meanwhile, real-life trans people face barriers including years-long waiting lists, intense scrutiny, and thousands of dollars in medical expenses to physically transition.

The Gokudols aren’t really transgender, though; it’s not like they wanted to become women, and they still think of themselves as men. Through their eyes, Back Street Girls supposedly takes aim at the cruelties and excesses of the idol industry and its fans. The Gokudols’ situation—appealing to niche fandom and performing in a small, shabby theater in a Tokyo back alley—parallels that of the now-popular AKB48, which started out performing in a theater on the top floor of a shady mega-mart in Akihabara.

There are some decent sketches that take aim at how obsessive male fans violate their boundaries. A yakuza bro harasses the Gokudols about wanting to touch their breasts until their boss forces him to get implants of his own; at a paid meet-and-greet, one fan asks a character to stare at his underwear for his allotted five minutes with her. From the idol labels of Japan to Hollywood’s casting couches, the entertainment industry abounds with men excited to take advantage of the vulnerable girls and young women around them, and fans who regard them as sexual objects to project their desires onto rather than human beings. Most anime dealing with the idol industry, such as Love Live and [email protected], are deeply optimistic, so it’s about time one depicted the darker side.

Back Street Girls, however, takes women out of the equation by using yakuza men, even if they look like women and perform femininity. The joke is not just how disgustingly men treat them, but that they’re being fooled into acting like that toward men. They think they’re sexually harassing women, but since they’re men, it’s actually gay! In these moments, the art shifts to showing the idols’ masculine, pre-transition faces juxtaposed with their current hairstyles, underscoring that the joke is at the expense of trans women. Hilarious.

It’s not always that subtle; a number of mean-spirited gags state outright that trans women will never be “real girls.” One finds that his father is actually a trans woman, drawn as a muscular man with facial hair and covered with yakuza tattoos but with blonde pigtails and a sundress. “Your Papa is now your Mama,” he says in a deep voice. In another sketch, a gang member chooses to transition after making a major error, but since their face isn’t feminine enough, they get kicked out of the gang and must work in a drag bar because it’s the only form of employment available to them. Trans women who can’t pass perfectly are nothing but a punchline; the show paints them as men disguising as ugly women to trick other men.

Even outside of the ugly, naked transphobia, Back Street Girls isn’t funny. In lieu of jokes, most of the comedy revolves around the voice actors screeching into the mic. Almost nothing but the characters’ mouths is ever animated, robbing the show of any potential physical comedy. The lack of animation also gives viewers a lot of time to ponder just how ugly the show is; the characters are frequently off-model, even positively fish-eyed. Their idol outfits are frumpy and unfashionable, and their performances are nothing more than sequences of still shots.

Shows should never punch down in the name of subversion like Back Street Girls does, because then they’re just maintaining the status quo. There are plenty of subversive comedies these days about women acting gross and stupid; they don’t need to be men forced into female-passing bodies. Recent anime series Asobi Asobase and Pop Team Epic offer the funny, incisive, and downright bizarre comedy to which Back Street Girls aspires. The difference is, they don’t treat marginalized populations as a punchline.