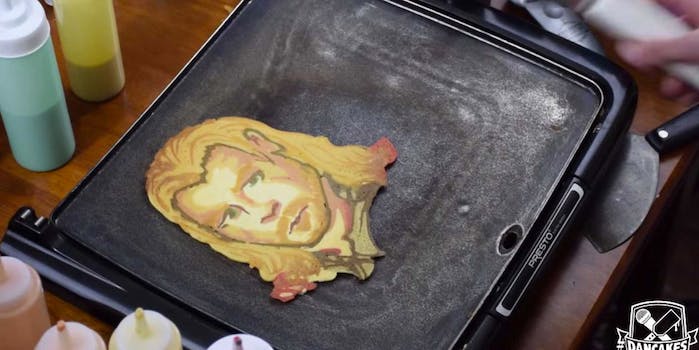 Marvel’s Avengers pancakes team up on your breakfast plate

Superheroes are many things: powerful, conflicted, overwhelmingly white men. But now, one redditor has shown that they can also be quite delicious.

A Reddit user by the name gabe2003 shared several GIFs of superhero pancakes going from batter to final product, and they look as tasty as they do fearsome: A mild-mannered splotch of batter becomes the raging Hulk, while the Black Widow pancakes takes shape to assassinate your taste buds before you even know what hit you.

Then there’s Thor, the god of breakfast.

Sadly, fan favorite Loki was nowhere to be found.

The pancakes designs were limited to the main characters in Avengers: Age of Ultron. We may have to wait until summer 2016 for our Justice League pancakes.

According to a link on the album, all of these delicious creations come from Dan ‘Doctor Dan the Pancake Man’ Danke, who has made quite a name for himself in the breakfast arts. The good news is there’s no shortage of characters to use as inspiration. Could our breakfast tables soon feature a Howard the Duck pancake?

Update 12:04pm CT, May 26: This story has been updated to include the name of the breakfast artist. Also these are pancakes, not crepes.