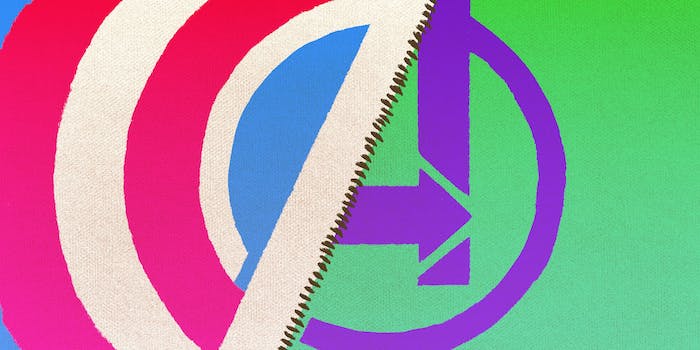 With names like 'stucky,' these were bound to be amazing.

What’s in a name? Plenty, when it’s a fandom ship name. The high art of pairing two (or more) characters in fictional relationships comes complete with a litany of clever portmanteaus or catchphrases that identify your One True Pairing (OTP) or OT3. Swan queen, science bros, Destiel, dream husbands, Larry Stylinson—it’s all part of the territory.

But as unique as ship names are, they’re also utterly confusing to anyone not in the know. Now, Tumblr fanartist tonysvandyke is attempting to draw ship names in the Avengers fandom—with hilarious results.

There are a bunch of cool thing about this fanart series, which tonysvandyke started in September and has intermittently kept adding to. For starters, the Avengers fandom is a great testing ground for this art experiment, because it has a lot of characters, and subsequently a lot of popular ship names. It also helps that tonysvandyke also helpfully includes the members of the pairing in the fanart, so you get to see exactly which of earth’s mightiest heroes constitute more initially obscure pairing names like “barbershop quartet,” “stucky,” “phlint,” “american airlines,” and my personal fave, “stark spangled banner.” (Think about it.)

And of course the best part of all: The fanart is awesome. Here’s the series so far—we hope there’s more on the way!