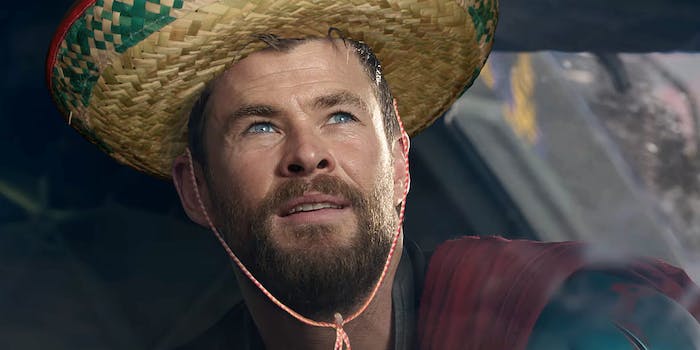 Dear Marvel, where the Mexicans at?

The 'Avengers: Infinity War' trailer is missing something.

On Wednesday, the internet took a break from email to enjoy the new trailer for Avengers: Infinity War. Seventeen movies into the Marvel Cinematic Universe, this is the film where all of the superheroes come together to fight Josh Brolin.

The trailer featured no shortage of swashbuckling adventurers: the talking raccoon, the green woman, three white guys named Chris, a blonde Scarlett Johansson, and even the Sony-mandated white and straight Spider-Man. But with all of those dang Avengers lined up to save Earth, I was frustrated to not see a single Hispanic person on the team.

There are almost 58 million Latinos in the U.S., but none of them made the trailer. Was Marvel saving them for the post-credits scene?

The brown delegation demands a brown person, on-screen, doing something cool—and not dressed in neon like Dave Bautista and Zoe Saldana, either. Or like Benicio Del Toro’s intergalactic jeweler character, the Collector, there as a plot stopgap.

Don’t expect much during Infinity War with this cast. According to IMDB, David Escobar plays a taxi driver. Sergio Briones plays a cop. Isabella Amar reprises her Spider-Man: Homecoming role as Sally Avril, a high school friend of Peter Parker we’ll surely see in passing. (In the comics, Sally becomes the hero Bluebird.)

Upon tweeting these concerns, I was told that Tessa Thompson’s Valkyrie character is emerging as a favorite. That’s a step in the right direction, but she was nowhere to be found in the trailer and is only a rumored addition to Infinity War.

I didn't see her in the new preview tbh but (sorry i'm going to ladysplain) Tessa Thompson is Latina! And her character is canonically queer I think! She's of afro-panamanian and euro-mexican descent. and she's awesome.

The “Captain America has always been white, what are ya gonna do?” argument is bogus. Cap is a drawing, for starters, and Marvel is writing all sorts of diverse brown people into its comics these days. There’s Miles Morales, the brown Spider-Man. America Chavez, Marvel’s groundbreaking queer Latinx lead, got her own series in 2017. You’re telling me someone who can kick holes in other dimensions wouldn’t be useful against the guy with all the magic crystals?

Marvel is working off origin stories from the mid-20th century, and that’s an antiquated approach. Fanboys gleefully accept this and it’s indicative of how little progress we’ve made when it comes to writing people of color into substantive pop culture roles. And with Hollywood suffering from record lows at the box office and doubling down on global franchises it can sell internationally, big dumb superhero movies are the few remaining tent-poles we all go see.

Representation matters: When my dad and I saw Iron Man 2, he left convinced that Robert Downey Jr. was low-key brown. He was amazed that a man with such clear Spanish features (his words) was cast as a Marvel leading man. As I sat down to write this, I had to make sure Mark Ruffalo wasn’t, like, Puerto Rican. (He’s a white dude from Wisconsin.) These are the lies we tell ourselves at the movies to find a human connection.

In 2015 Marvel movie Ant-Man, Michael Peña played a charismatic former thief who spent most of the movie doing customer support for Ant-Man in a van. When everyone saving the world looks like Paul Rudd, it’s easy to see brown people as periphery caricatures who don’t contribute to society.

When we’re not taught to empathize with people of color and other genders—even subconsciously in big ol’ action flicks—they become disposable. With divisive politics at a fever pitch, that big-screen absence of brown people helps us forget what the Latino community is actually enduring these days.

Immigration Customs Enforcement (ICE) arrested four people this week prior to a DREAM Act protest. ICE is arresting brown people dealing with traffic tickets at courthouses and taking them to immigration detention centers. ICE mistakenly tried to deport American citizen Sergio Carrillo after arresting him in a Home Depot parking lot this month. ICE’s 2017 raids have arrested hundreds, while the agency itself grapples with the ethics behind this racially motivated, Trump-era mandate to crack down on immigrants, as its internal emails suggest.

This strain on people living in America goes mostly ignored. When you scroll past the news on Facebook, you accept it’s not your problem.

More than ever, it’s incumbent on Marvel to help fight stereotypes with, I dunno, a Xicanista who can throw lightning bolts.