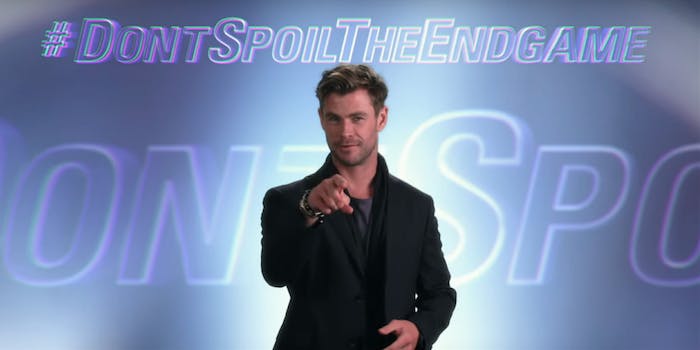 It's a wild story of revenge. But is it real?

We’re living in a minefield of movie and TV spoilers, and avoiding them can be fairly exhausting, especially in regards to Avengers: Endgame. Many fans even felt the extreme secrecy and spoiler-phobia around the Marvel release took away from the actual story. So how should we interpret the story of a fan who allegedly befriended the man who spoiled Infinity War for him last year—only to spoil Endgame for him?

A post on r/ProRevenge from Jus10Sch details this year-long con, which apparently started with a stranger spoiling Infinity War in the comments on his Instagram post by listing everyone who’d died. Jus10Sch then befriended the stranger, and for roughly seven months, the two messaged about movies and memes. Then, in the final stage of revenge, he became the guy who takes photos throughout the entire movie:

Skip forward to about last week. I bought my Endgame tickets and I was going opening night. I asked him if he was going opening night and he said no, which was great news. He said he was going next week (this week). So I saw Endgame, and while I was in the theater, I took PLENTY of pictures. I took pictures of Thanos death #1, Captain Marvel, Ronin, Black Widow’s death, Smart Hulk, Fat Thor, 2 Captain America’s, 2 Nebulas, Stan Lee’s cameo, all the snapped coming back, Iron Man’s death, and several other plot points. When I got out, I almost thought of not doing it. I don’t like to spoil movies, I think it’s lame, but I reassured myself that this guy deserves it. So I texted him that I saw it, he asked how it was and I told him it was great, he told me not to spoil it, and I said “Oh, like how you spoiled Infinity War.” Then he switched moods, he was all like “Hey man, that was a long time ago, we’re friends now,” Stuff like that. Then, in one glorious action, I sent all the pictures as fast as I could, messaging plot points along with the pictures. It was all over in like 30 seconds, but he definitely saw it all.

While this story is probably already being adapted into a movie, there were quite a few people who called bullshit. The poster claimed the “friend” blocked him on Instagram and that he doesn’t want to publish the photos for fear of getting in trouble. But the Marvel fandom certainly brings out some obsessive and toxic behavior. Elsewhere, he was called out for posting on r/ProRevenge and not r/pettyrevenge.

But mainly, a lot of people wanted to know why he had so much time to invest in this. Plus: Months of messaging with someone about memes, and there’s no emotional connection? What gives?