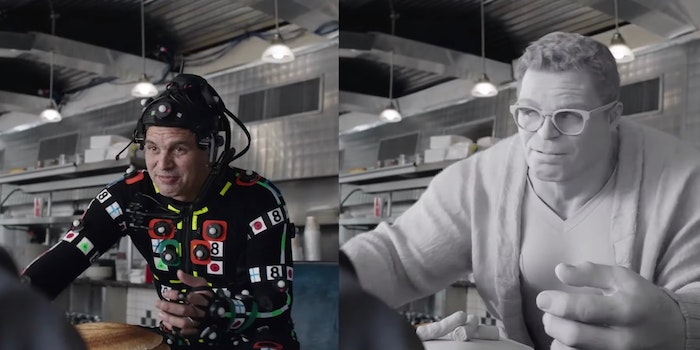 The visual effects of Avengers: Endgame are impressive in their own right, but a new video shows just how much went into making one of its biggest effects look so completely lifelike.

Although Thanos pushed what was possible in regards to face-mapping in Avengers: Infinity War, Mark Ruffalo’s Smart Hulk took that to another level. It’s not just seeing the Hulk in the midst of a rage-induced fight. He’s now Smart Hulk, a merge of Bruce Banner’s wits and personality with the Hulk’s size and strength. But he’s also a character who would not have worked if he didn’t look convincing.

Thankfully, that wasn’t something we have to worry about. As shown in CG Record’s reel, Smart Hulk has the foundation of Ruffalo’s performance, but it’s the layers upon layers that truly gives the character life.

And Smart Hulk is so incredibly detailed—this is a Hulk with stubble, wrinkles, and pores—that it also has the inverse effect of making some of the CGI around him, such as the wreckage he threw around to make it look like he was Avengers-era Hulk, look a little worse in retrospect.