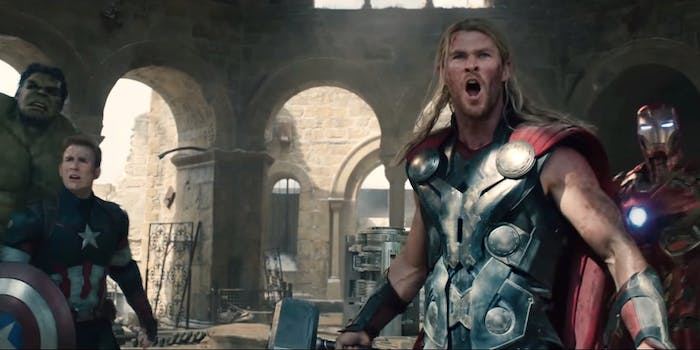 ‘Avengers: Age of Ultron’ trailer is much better with Spider-Man slinging around

If only this were the real thing.

The latest trailer for Avengers: Age of Ultron has everything for the fans: explosions, more hot Ultron, our first proper look at the Vision, smaller character nuances, Bruce and Natasha feels, and even glimpses of Clint’s farm. But with the help of some clever editing, someone managed to give us the Marvel movie we’ve always wanted: Spider-Man meets the Avengers.

With Sony lending Spider-Man to Marvel Studios in a new partnership, the possibilities for how to bring him into the Marvel Cinematic Universe are endless. Sony shot down the rumor of a Spidey cameo in Age of Ultron back in January, so the logical choice for his first MCU appearance is Captain America: Civil War—due to both the timing of the film’s release in 2016 and Spider-Man’s crucial role in the original Civil War comics.

Due to Sony’s control of Spider-Man’s movie rights, the webbed hero has never been able to appear alongside his fellow Avengers—until now, thanks to Neogaf user plainr_ inserting him into what is easily one of the most epic shots of the trailer.

We normally see Spider-Man using his webs to leap from building to building, but he could just as easily use his skills in the forest, where the Avengers are fighting their latest foes. In the process of hurling himself dramatically forward, Spidey manages to obscure one of the Avengers from sight, but with the whole gang truly together at last, it just might be worth it.