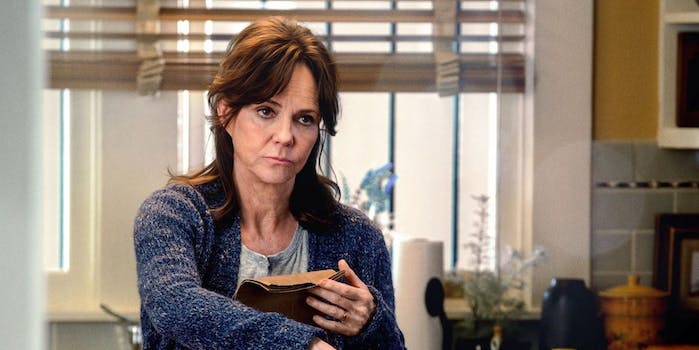 Sony had to clarify that Aunt May isn't getting her own Spider-Man spinoff this week.

Sony is developing a female-led Spider-Man spinoff, and on Tuesday Latino Review reported that it would be a movie about Aunt May. Not Spider-Woman or Gwen Stacy or any of the other female Spider-Man characters owned by Sony. Peter Parker’s elderly aunt.

Latino Review described it as, “A movie about Aunt May as a youth, before she was shouldered with the responsibility of raising Peter Parker. The target mood is some sort of espionage story in the vein of AMC’s Mad Men, which sounds like a way of saying “classier Agent Carter” without name-dropping Marvel’s upcoming series.”

This rumor quickly traveled across social media, alighting at outlets such as IGN, the AV Club, and Screenrant. With a couple of exceptions like io9, which headlined the story “HA HA HA NO,” most people reported it as something approaching a reasonable possibility. But by the end of the day, Sony had told Comic Book Resources that the rumor was “silly” and had “no validity whatsoever.”

Well, yes. Obviously. So, why did so many people believe it? Or if not believe it, then at least treat the story as vaguely credible? The answer is that in the context of Sony’s attitude to the Amazing Spider-Man franchise, the idea of an Aunt May spinoff isn’t quite as crazy as it sounds.

Spider-Man is Sony’s biggest property, and it needs to keep churning out sequels and spinoffs no matter what. Unfortunately, the range of characters in the Spider-Man “universe” is relatively limited compared to the X-Men (another Marvel Comics property that was sold to an outside studio), so the franchise relies on either rebooting Spider-Man over and over again, or launching lesser-known characters like the Sinister Six and Venom.

Many people viewed Sony’s female Spider-Man movie announcement as a sign that Sony was grasping at straws. The people in charge of the franchise seemed vaguely aware of the superhero movie zeitgeist, but were unable to pick out a specific idea that would get audiences excited. Previous rumors have included a Gwen Stacy solo film, the working title “Glass Ceiling,” and the possibility of an all-female Spider-team. Since Marvel Studios has launched non-superhero spinoffs like Agents of S.H.I.E.L.D. and Agent Carter, and the X-Men franchise went back to the 1960s and ‘70s for its last two movies, the basic concept of an Aunt May backstory movie wasn’t a total non-starter.

Plus, that Latino Review article was published on the same day we found out the Fantastic Four reboot had turned Doctor Doom into a blogger. Perhaps it was just a day for weird comic book movie leaks.

Except, of course, it wasn’t. Sony quickly debunked the rumor, and Twitter was left to chase its tail around a growing collection of Aunt May jokes and fan theories.

The main thing we’ve learned from this isn’t that fandom is gullible, or that the Internet has a bottomless appetite for the most nonsensical of Hollywood rumors. It’s more that Sony’s reputation is now so low that an idea like “Aunt May’s Cold War espionage backstory” can honestly seem almost plausible.