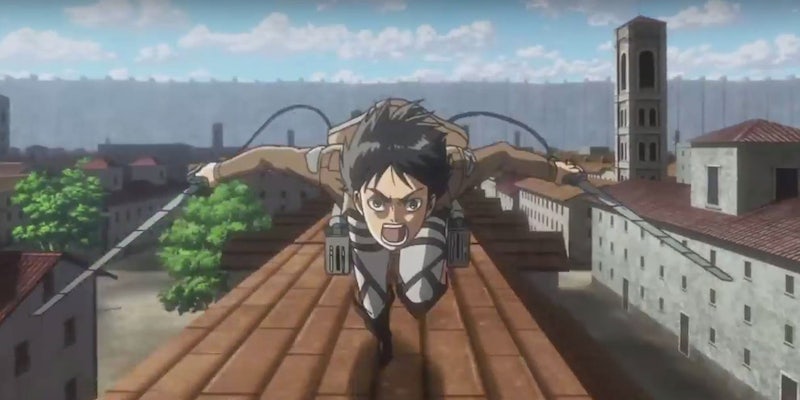 Here’s everything we know about ‘Attack on Titan’ season 2

After years of waiting, fans finally have a return date for the smash hit anime Attack on Titan.

Attack on Titan season 1, adapted from the popular manga by Hajime Isayama, wrapped back in 2013. It didn’t take long after that for the show to become an international sensation, thanks in part to its arrival on Netflix and other streaming sites in the U.S. and around the world.

The show spawned a live-action movie and video games, but most fans have ultimately been yearning for the next chapter of the anime saga, in which human survivors attempt to protect their communities from monstrous and hungry invading giants called Titans. They won’t have to wait much longer. Here’s everything we know about Attack on Titan season 2—and the full-length trailer released March 24.

Eren Jaeger swore to wipe out every last Titan, but in a battle for his life he wound up becoming the thing he hates most. With his new powers, he fights for humanity’s freedom facing the monsters that threaten his home. After a bittersweet victory against the Female Titan, Eren finds no time to rest—a horde of Titans is approaching Wall Rose and the battle for humanity continues!

Much of the voice cast from Attack on Titan season 1 will return in season 2. The full list, according to Crunchyroll, is listed below. Crunchyroll also notes that famed Japanese musician Revo’s Linked Horizon will be featured in the opening theme song.

A trailer for the new season of Attack on Titan debuted in December via Funimation.

With the announcement of the premiere date, we also got a new poster for the show.

Funimation announced that it will host a simulcast premiere on April 1.

Where to watch Attack on Titan season 1

You can catch up or re-watch Attack on Titan season 1 for free on Crunchyroll and Funimation, or with a subscription on Netflix and Hulu.