A packed crowd experienced the English dub world premiere of hit anime Attack on Titan on Saturday at Anime Boston.

The lucky crowd who arrived early to a line that wrapped around an entire floor of the Hynes Convention Center Saturday were the first to experience the world premiere of the English dub for Attack on Titan at Anime Boston.

The dub was the main event of main events, the highlight of a weekend where the wildly popular anime has headlined panels (due to popular demand, the convention added an encore showing of both Attack on Titan and Kill La Kill) and far outnumbered other cosplayers in hallways. 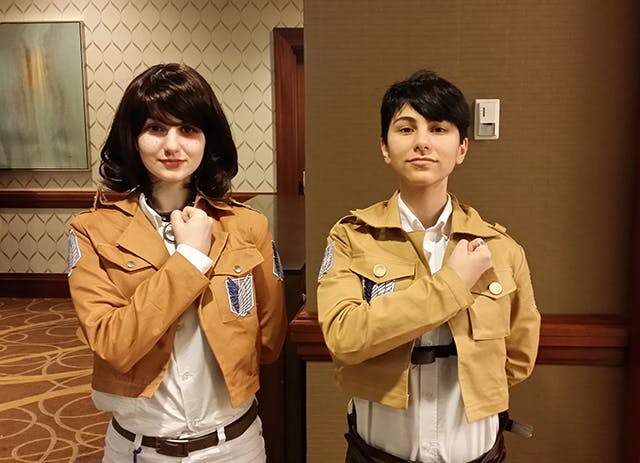 Anime Boston premiered both the English trailer and the first five episodes. Fans greeted the announcement that Bryce Papenbrook was the voice actor for the show’s lead character, Eren Yeager.

“You should be watching!” screamed a fan near me at the dub, a reference both to the slogan for Titan’s English license-holder, Funimation, and to the fanatical contagion that the show’s fans seem to spread. 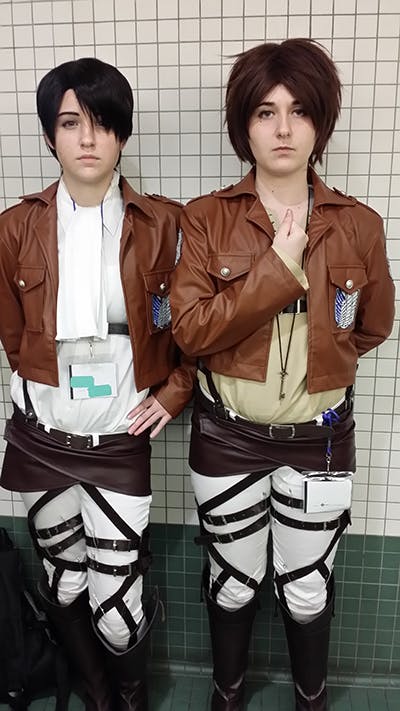 The English trailer captured the series’ high-velocity intensity (though it was low in actual Titans). The trailer accompanied the announcement of a special DVD release of Season 1 and a collected “colossal” edition of the manga featuring 15 new color panels, due out in May.

Although fans have undoubtedly seen SnK’s dramatic opening countless times before, the attitude of the full auditorium as the dub began was hushed, attentive reverence—at least until the familiar theme song kicked in, prompting the audience to join in the chorus of “jaeger!” 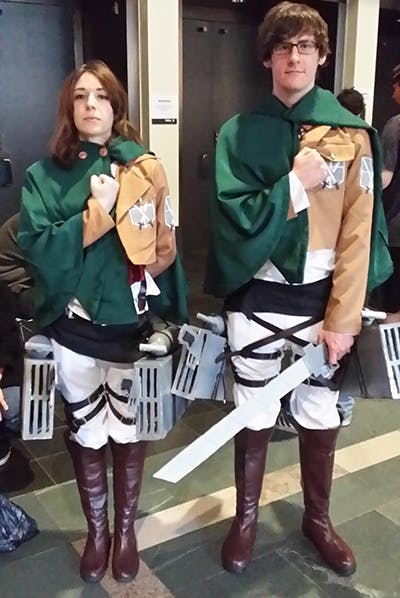 Papenbrook’s Eren alternates between defiance and PTSD as the driven boy who joins the Survey Corps to avenge the death of his mother and becomes part of a mysterious possible solution to the war between humans and the enormous titans who threaten to devour them. Mikasa, voiced by Trina Nishimura, likewise embodies the character’s steadfast strength and calm. But the standout of the dub is Armin. Voice actor Josh Grelle imbues this unlikely hero with reedy determination, capturing his fragility and his courage.

A few of the dub’s choices raised eyebrows, particularly decision to pronounce the character typically called Mi-ka-sa is Mi-ka-sa for the English edition. But the dub nicely preserved all the intensity and drama of the original. “Nothing like seeing these bastards fat and happy on human gristle,” remarks a townsperson in an early moment where the dubbed translation finds its strength—namely the ability of the voice actors to convey fraying nerves and rapidly mounting fear in the face of unthinkable terror. The series’ horror was likewise well-served by the convention room’s 30-foot-high screen. The few con attendees around me who hadn’t yet seen the series seemed a bit shell-shocked by its gruesome first episode, while other longtime fans cried. 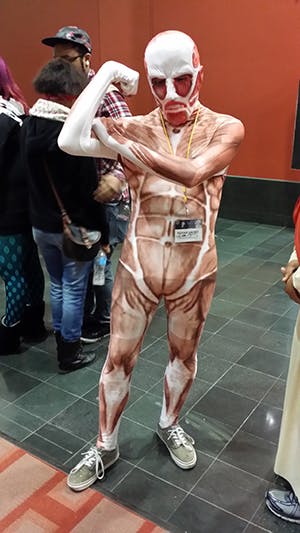 But the biggest cheer was reserved for the first glimpse of the Survey Corps, and especially the show’s resident heartthrob (every anime has one), Levi.

“LEVIS VOICE ACTORS VOICE IS SO SEXY AND HES SEXY LIKE HES SO CLOSE CAN I TAKE HIM HOME,” Tumblr user p0isonivy Tumbled from the convention room. 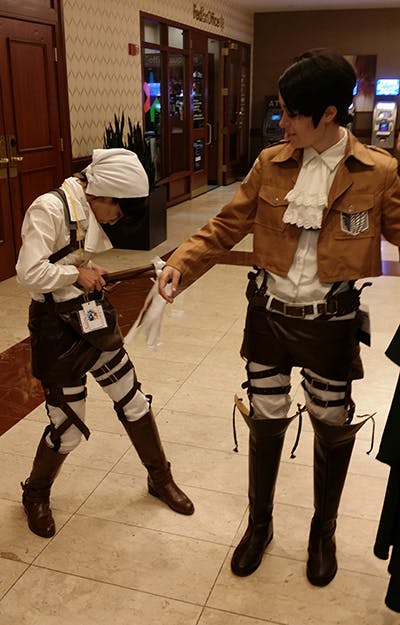 What was the verdict? “Oh my god, it’s amazing,” says Sara, a fan who tells me she started reading the manga the day after the first episode of the anime aired. She also pointed out that the English dub has worked in hints of foreshadowing in the translation.

While Titan‘s dub didn’t answer any of the big riddles of the show, like what’s in the basement, it did deliver the thrills and tears fans have come to expect. Meanwhile, congoers got to experience the show at its best: as seen in a room full of other devoted fans. 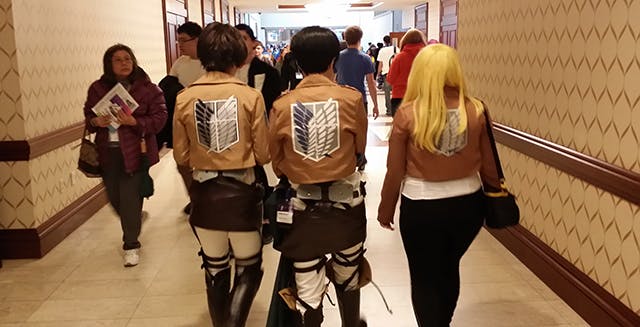