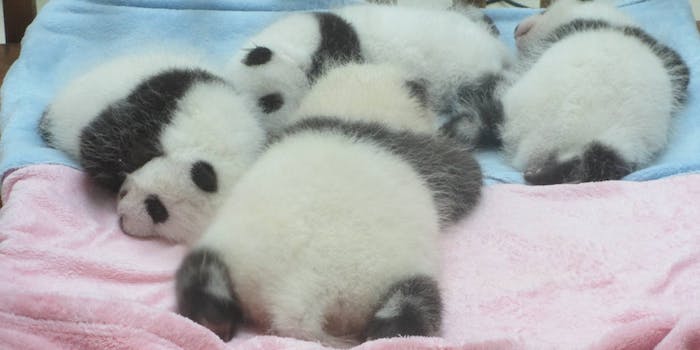 It’s all in the hopes of bringing back a wild panda population.

The Atlanta Zoo is getting ready for a very special new arrival. One of the zoo’s giant pandas, Lun Lun, is about to give birth—quite possibly to twins.

To help people understand the immense work that goes into rearing a baby panda, members of the veterinary and husbandry staff at the Atlanta Zoo took to Facebook live to answer questions and talk about how they were getting ready for Lun Lun’s new cub or cubs.

The zoo is also hosting an around-the-clock livestream of Lun Lun’s den with Animal Planet, so fans can join the zoo as it eagerly awaits the new arrival.

Lun Lun is part of a major conservation effort that zoos across the globe participate in to try and save the giant panda. As few as 1,600 pandas live in the wild, and around 300 are in zoos, according to the Smithsonian National Zoo. The goal of the captive breeding program, where captive pandas give birth to babies that go back to China once they’re old and healthy enough, is to re-introduce pandas to their natural habitat in the bamboo forests of China.

But raising a baby panda is no easy task. When they’re born, they’re the size of a stick of butter, according to one of the Atlanta Zoo’s staff in their Facebook Live video. They also have very little fur, can’t regulate their body temperature, haven’t opened their eyes, and can’t walk—so newborn pandas need a lot of care from mom.

Unfortunately, panda moms often abandon their cubs. The reason, the Atlanta Zoo staffers explained, is that it takes a lot of “intense work from mom” to raise their cubs.

The moms will cease eating and drinking for the first week after their cubs are born. They have to keep them on their chest, breathing on the newborns to keep their temperature and surrounding humidity ideal. In the case of twins, the mother will often abandon the weaker baby so she can focus her energy in the baby most likely to survive. This is a pretty common practice among many animal moms, not just pandas, according to the Washington Post.

This is where the zoo keepers come in. The Atlanta Zoo is ready with an incubator—the same kind used for very small premature babies—in case they need to help one of the cubs along. If Lun Lun, who’s been a very successful mom, rejects one of the two possible cubs, the staff said they’ll help stabilize the cub and then switch it with the other one. Doing this will help Lun Lun bond with both cubs, and encourage her to keep them both.

The cubs are totally dependent on their mothers for the first four to five months of their life, so it will be a long road for Lun Lun and her keepers to make sure that the cubs grow into strong, healthy pandas whose offspring may eventually be released into the wild.

The jury is still out on how much captive breeding helps wild pandas. Some think the program is a waste of time and money. According to a 2013 article in National Geographic, captive breeding programs have yet to yield good results. Only one of the two pandas that have been released in the wild so far have survived. Some think the more important thing to do is focus on conserving the habitat for the wild population of pandas.

The World Wildlife Fund thinks it’s critical to maintain and grow wild panda populations. Pandas play an important role in maintaining the ecosystem of the bamboo forests in which they reside. Without pandas, WWF warns, the ecosystem could collapse, taking down several other endangered animals as well.