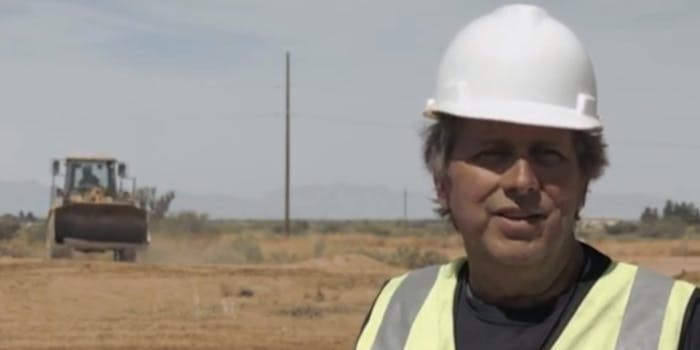 Earlier today, construction crews in New Mexico finally started their dig for the worst video game of all time.

The Atari game E.T. is the subject of their quest, and it’s also the subject of a documentary by Zak Penn, tentatively titled Dumping the Alien. The producers of the film spoke about their project at SXSW this year.

The game, released in the wake of Steven Spielberg’s 1982 film, was designed by Howard Scott Warshaw. Warner Communications, the company that owned Atari, wanted a quick turnaround on the game to cash in on the movie’s popularity, so he was only given six weeks to create it. It’s been called the game that “ruined” Atari.

Legend has it that the company, in an effort to make their mistakes disappear, filled 14 trucks with unsold games in the summer of 1983 and buried them in a landfill in Alamogordo, N.M. In the 30 years since, the game has become an urban legend, as collectors have attempted to track down any remaining copies. Penn and his crew are filming the excavation for the documentary; Wired spoke to him yesterday, as they were prepping for the dig.

According to the AP, the city of Alamogordo “agreed to give the documentarians 250 cartridges or 10 percent of the cartridges found, whichever is greater.” Looks like diggers have uncovered some pop-culture treasure.