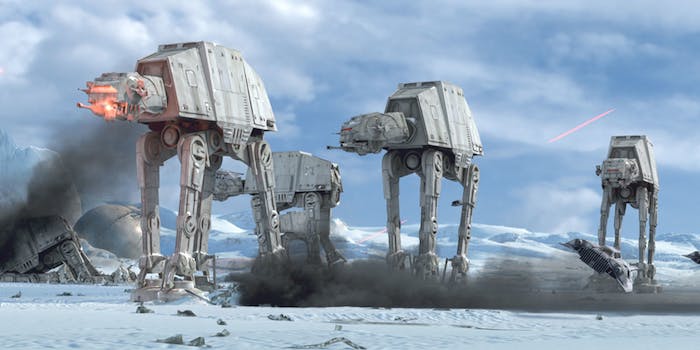 There’s always someone in the neighborhood who covers their house in a billion Halloween decorations or Christmas lights. Star Wars fan Nick Meyer falls into that category, but he’s a little more ambitious. This year, his Halloween project was a two-story model of an AT-AT walker.

This thing is a professional-looking operation. You can check it out in this video from the AP, interviewing Meyer and his wife about the process of building the AT-AT. Apparently it took six months to create, building the individual parts before assembling it in the garden. It’s 19 feet tall, and Meyer based the design on a model toy.

This couple sounds like they’re a lot of fun to be around. Their neighbors seem excited to have such a cool Star Wars model in the street, and apparently Nick Meyer and his wife Becky have a pair of classic Star Wars costumes in the works. She’ll be Darth Vader, while he’s dressing as prisoner Leia from Return of the Jedi.