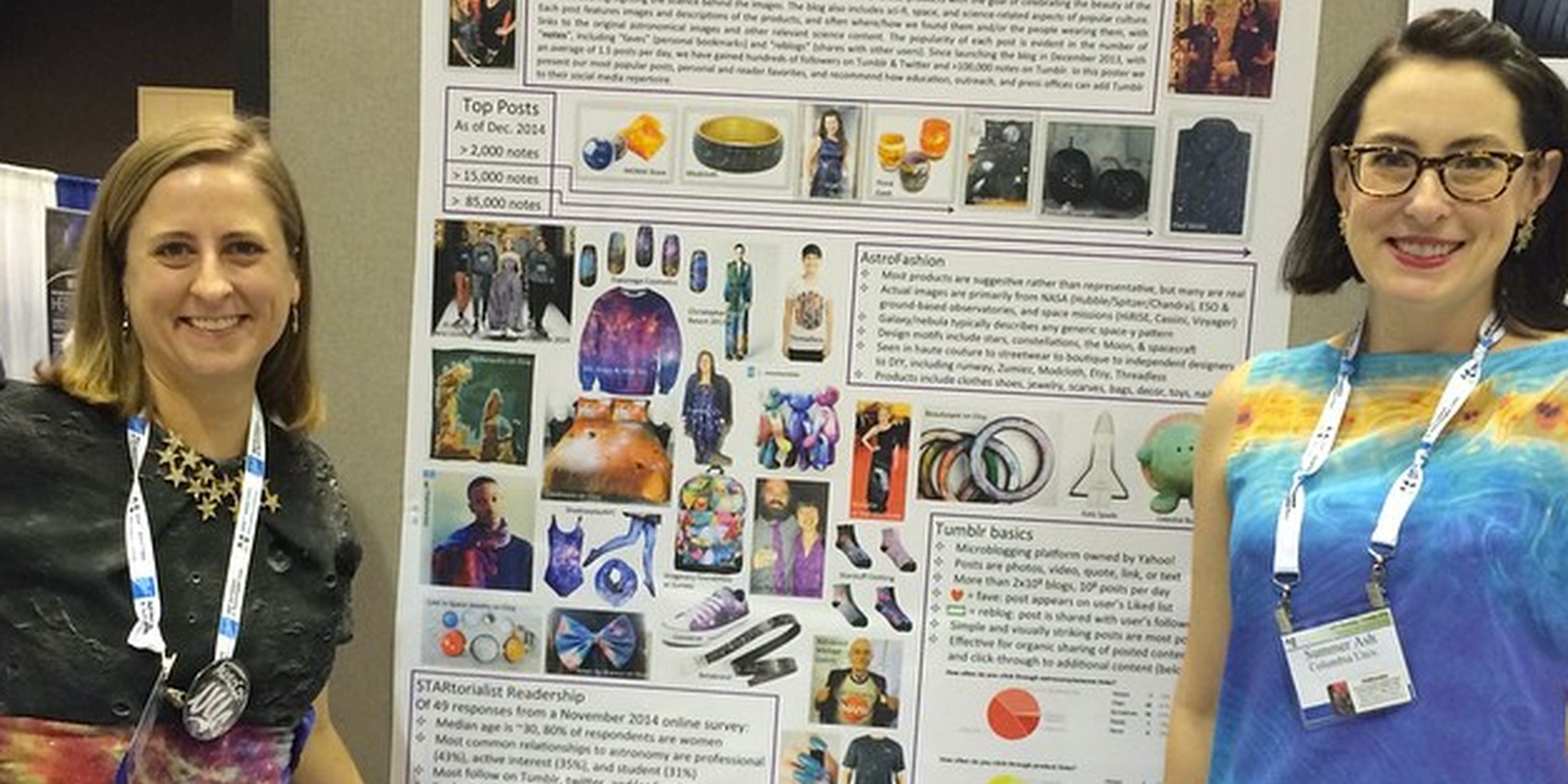 STARtorialist is all about love for science and fashion.

The worlds of science and fashion colliding might seem like a rare event, but one Tumblr blog is proving that it happens a lot more often than you think.

STARtorialist was created by astrophysicists Emily L. Rice and Summer Ash about a year ago when they discovered they shared a love of science-inspired fashion. Rice told the Daily Dot the idea had been on her mind since graduate school, when she discovered stores like Black Milk Clothing selling space-inspired fashion. Though out of her price range while in school, she kept the items in mind.

“Then I kept seeing more and more and more, and I was like ‘I’m going to lose these. I have to catalogue them or something like that’ and I was thinking about starting a blog to keep track of them. When I started finally talking about this with other people, Summer was like ‘Yeah, we should totally do that!’” she explained.

The astrophysicists feature products and the styles of their fellow scientists on the blog, whose tagline is fittingly “where science meets fashion and scientists get fabulous!” Rice said they never have a problem finding items to highlight and actually have a backlog of posts waiting to go up because they’ve found so much. The range of items from apparel to accessories to cosmetics might surprise those who haven’t made the effort to look for science fashion. 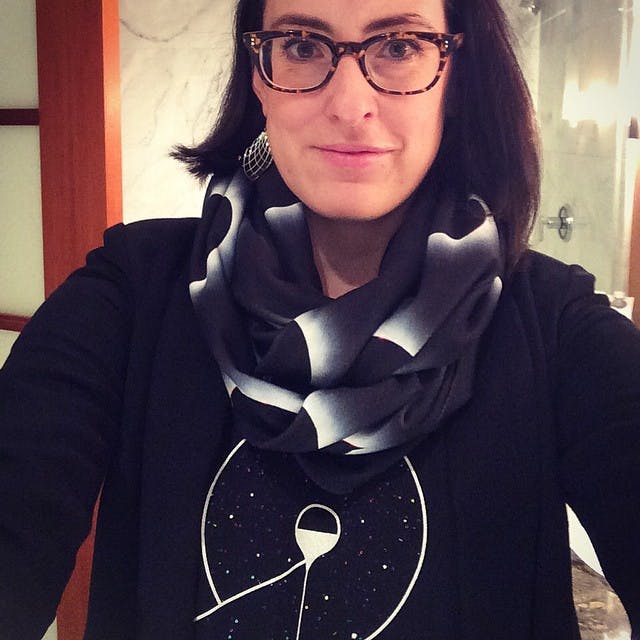 Ash’s Shadowplaynyc pieces, especially her scarves like the one seen here, are her favorite science fashion purchases.

“People are aware that there’s sort of a galaxy theme out there that sometimes are real images and sometimes they’re just artistic renditions, but I don’t think people are aware of the extent of it and how much that expands into all different types of product lines,” Ash told the Daily Dot.

There’s something for everyone on the blog from everyday wear to runway styles, pricy to affordable products, and options for men, women, and children. Looking through all the options is a lot of fun, but you’ll also learn something. As often as possible, they include the name of what you’re seeing displayed on each product such as a galaxy, along with information about it like its age and why scientists are interested in studying it. Dr. Ash said it’s a “come for the fashion, stay for the science” approach. 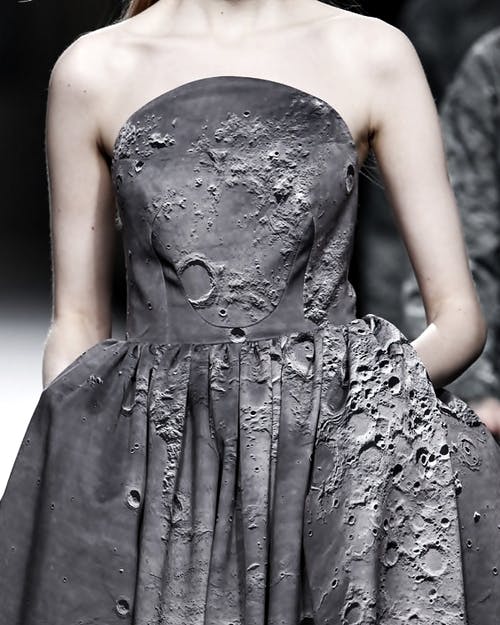 This moon gown by designer Ana González is one of Rice’s favorite fashions. It was discovered and brought to Rice and Ash’s attention by astronomer Sarah Ballard.

“Our aim is not to make the entire world scientists or astronomers, but sort of appreciate the world around you, the universe around you,“ she said.

When it comes to education, Dr. Rice would also love for designers to be more informed about the science in their fashion and ask astronomers and scientists for input.

“Don’t just be inspired by astronomy or the sciences, but use a little bit of it in the stuff that you design and maybe learn a little bit along the way. Some companies do that, which is very nice, but I would love for Valentino and Rodarte and the companies that have produced these gorgeous fashion lines to have an astronomer on their consulting list or something like that,” she said.

Just as impressive and exciting as the range of products are the scientists highlighted on the blog. 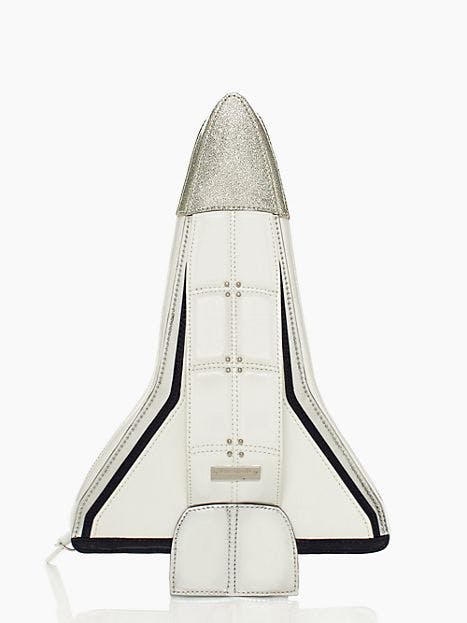 “Highlighting actual scientists is something that we want to do because we in no way want to say ‘Scientists you have to dress on theme,’ but it’s kind of like a form of self expression and so it’s like, ‘Look, scientists are not all in these button-up white shirts with no sense of the world around them.’ They express themselves in all these different ways and we think that’s really fun and we want to highlight that,” Ash said.

According to Rice, all of the scientists they have approached so far about being featured have been enthusiastic about it. Even scientists they didn’t approach directly have expressed excitement about the blog, including some people who surprised them. 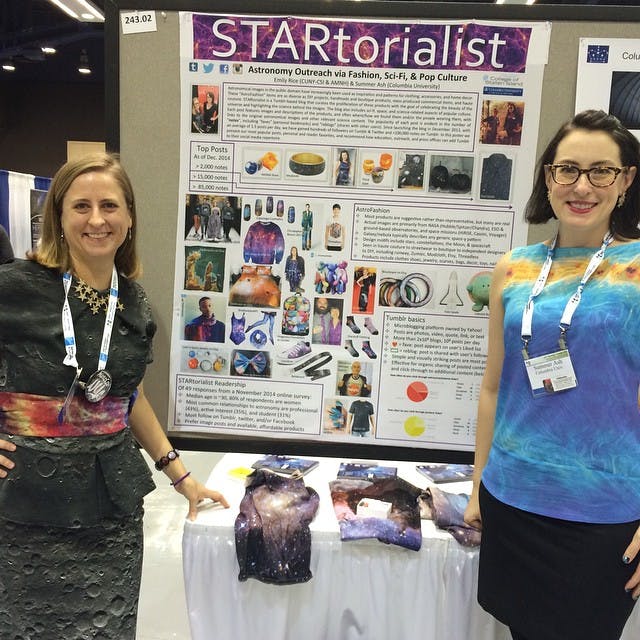 “At the [American Astronomical Society] conference there was a booth not too far away from ours staffed by old white dudes and they found out what I was doing and came over in groups and were like ‘This is so exciting! How do I buy this stuff for my wife? I love it.’ That was kind of the demographic that I thought would not take this seriously and at least this subsample was very, very excited about it so that was really comforting to me,” Rice said.

One of the things she hopes people take away from the blog is a realization that it’s OK to like both science and fashion, that the two aren’t mutually exclusive, and neither is being a scientist and a fashionista.

“The physical sciences especially are still very male dominated and even women who get involved in that will tend to defeminize themselves because that’s our implicit bias, that women are not necessarily as good at the physical sciences or you have to be a little bit more masculine to be taken seriously and I want to flip that on its head,” she said. “ I want to make it so that we can care about fashion, we can care about style, and we can care about science and be taken seriously in science and that’s a big change. It’s an implicit bias. It’s not necessarily an outright prejudice or anything like that still, but its definitely pervasive and I hope this goes at least a small way to changing stuff like that.”

With the enthusiasm these two astronomers display on STARtorialist, there’s no doubt they will make a difference in the field as they show that science and fashion can have a place together. Perhaps they will even get the chance to do so beyond the Tumblr one day as well. After all who would be better to consult on the next big space fashion line than these two fashionable scientists?

You can keep up on Rice and Ash’s latest fashion discoveries on Tumblr and Twitter.