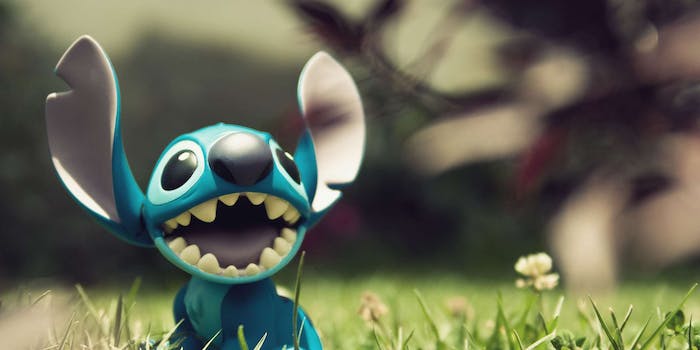 Astronomer says we could make contact with aliens if we try

When scientists receive a promising signal from outer space, they have a plan.

When the scientists searching for intelligent extraterrestrials receive a promising signal from outer space, they have a plan.

The official document at the SETI (Search for Extraterrestrial Intelligence) Institute in Mountain View, Calif., boils down to something like this: check to make sure the signal isn’t bogus, announce it to the world, and consult internationally before we send a reply.

“But in reality, it will be a mad media scramble,” explained SETI Institute senior astronomer and director Seth Shostak on Thursday in a Reddit AMA. “And the scientists will be trying their best to learn as much as they could about the signal.”

The SETI Institute is just one group of researchers looking for intelligent life beyond our planet. The Institute’s search includes scanning for possible alien signals and relies on the Allen Telescope Array, which examines targeted areas of the sky. Researchers at the Institute also work on finding less intelligent life—like microbes that might live underneath the icy crust of Jupiter’s moon, Europa. (Full disclosure: I’ve worked for the podcast Big Picture Science, which is produced at the SETI Institute and co-hosted by Shostak—he’s a cool guy.)

The AMA attracted far more questions than Shostak could answer, but revealed the hunger we have for knowing who might be out there. Some of the responses were snark, some veered into conspiracy theory territory, and others referenced pop culture: 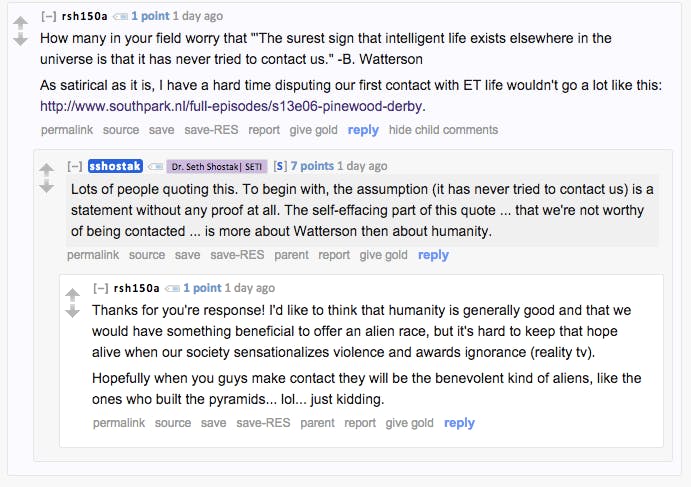 Yet, plenty more were illuminating.

For example, one person wanted to know why SETI scans the sky for radio waves. Aren’t they drowned out by background noise as they travel across the vast expanse of space? Shostak explained:

We can detect radio waves from billions of light-years away, and without a whole lot of trouble, either. The idea that they become indistinguishable from noise at some small distance is incorrect. With a big enough antenna, you can ALWAYS find the signal.

You read the first sentence of this story right, by the way: when, not if. SETI Institute researchers and many other astrobiologists around the world are fairly convinced that E.T. is out there, somewhere. They even have a (relatively) simple math equation.

The Drake Equation estimates the number of detectable, technological civilizations scattered among the stars. It’s a string of variables that includes the rate at which stars form, the fraction of those stars with planets, the average number of planets per solar system that have environments suitable for life, and the fraction of life-bearing planets on which intelligent life emerges. Unlike the math problems you did in grade school, there is no right answer to the Drake Equation. Clearly many of these variables are guesses at this point, but the whole equation helps scientists think about what we know and what we don’t. It looks like this:

This TED-Ed video featuring the SETI Institute’s Jill Tarter gives a rundown of the equation:

There is reason to be hopeful (if you look forward to alien contact, that is). For example, the Kepler spacecraft, launched in 2009, has stared at just a small fraction of the night sky and found 978 confirmed planets, according to the ticker in the top right of NASA’s mission page, and more than 4,234 possible planets. That’s just one scientific effort.

Plus, as humans started transmitting radio and television at frequencies that can survive in outer space, we’ve been sending out our own signals, albeit unintentionally.

“The leading edge of these signals has already washed over thousands of planets of other stars,” Neil deGrasse Tyson said in one episode of Cosmos: A Spacetime Odyssey. Science journalist Nadia Drake, blogging for National Geographic, reports the full quote in a post about the search for E.T.:  “What if other worlds are sending their stories into space? Since 1960, we’ve been listening for extraterrestrial radio signals, without hearing so much as a tolling bell. But our search has been sporadic and limited to small parts of the sky. For all we know, we may have just missed an alien signal, looking in the wrong place at the wrong time.”

Keep in mind that 50 years or so is just a blip in the life of our planet, never mind that of the universe. We are getting closer to an answer all the time. Currently, researchers estimate that one in five stars have planets, Shostak wrote in his AMA. That number and the potential for extraterrestrial life even within our solar system leads him to predict that we could find alien life—intelligent or microbial—if we try.

“I don’t think we’ll examine ALL the stars in the galaxy individually within 35 years,” he wrote. “But we could examine millions of them. And that might be the right number to succeed.”

Photo via azrasta/Flickr.com (CC BY 2.0)