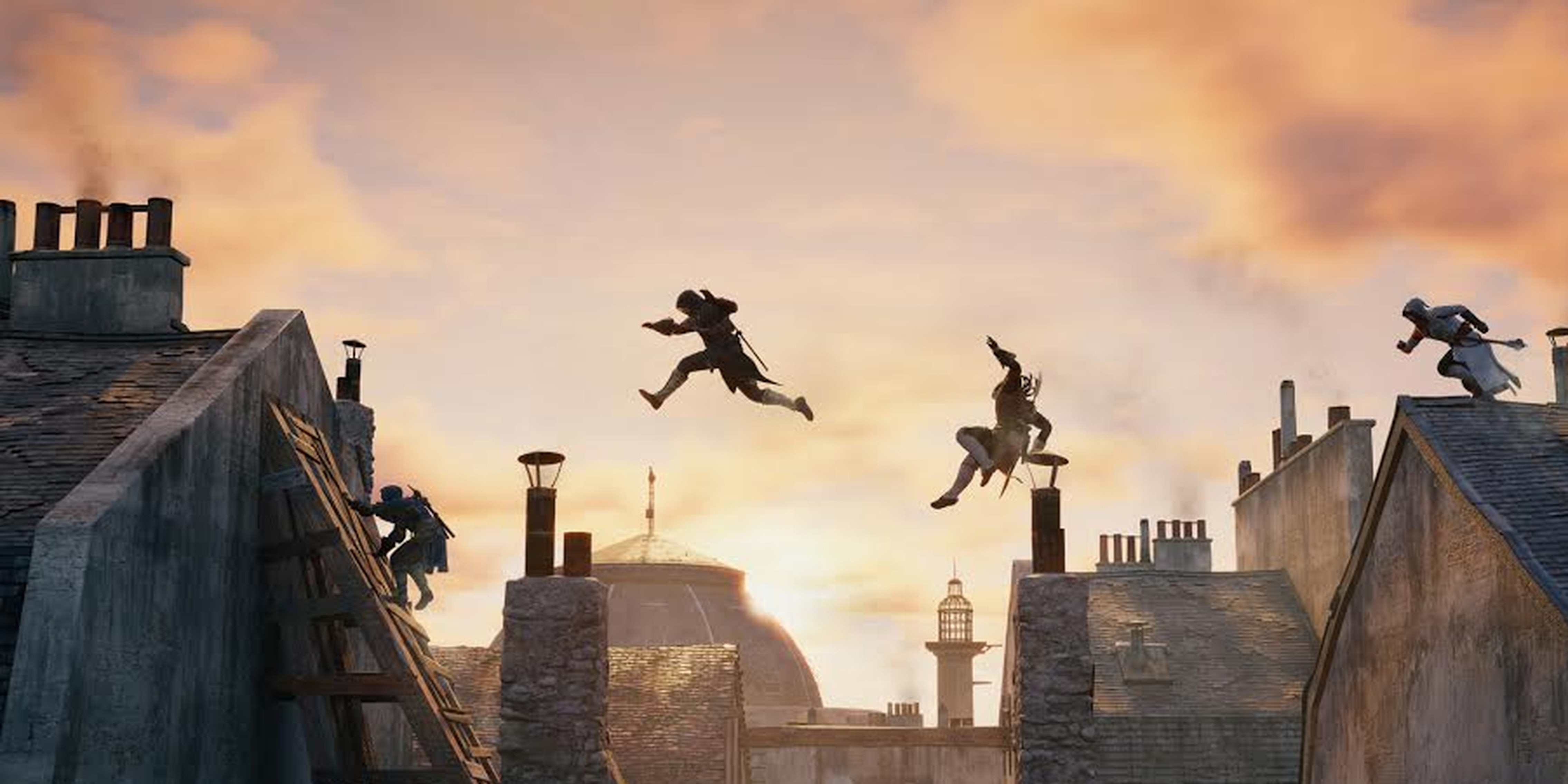 Assassin’s Creed: Unity ends the 18th century on a whimper

The French Revolution provides a stunning backdrop to a lackluster play experience.

Over the last two and a half years, the Assassin’s Creed franchise has taken players from the American Revolution to old-time piracy on the high seas.

Now with the release of Assassin’s Creed Unity, Ubisoft is taking on the French Revolution, essentially exhausting the 18th century as historical source material. It’s hard not to reflect in awe at the developer/publisher’s efficency with the franchise. For as much as I (unexpectedly) loved the sea-faring adventures of Assassin’s Creed IV: Black Flag, I appreciate Ubisoft’s desire to return ashore for the fans whose ideal game is one set primarily in a well-developed urban setting. The studios behind Unity got the right idea with revolutionary-era Paris, although some of their design choices for the sake of realism, such as a large and packed crowds of unruly citizens, feel unnecessary.

In the months leading up to Unity’s release, Ubisoft pitched Unity’s story as an investigative crime drama. While that’s true, it’s still fundamentally not that much different from other Assassin’s Creed narratives. When an Assassin’s Creed protagonist isn’t gathering information, he is acting on or reacting to events. From one lead to another, the assassin works up the chain of culprits, often killing a boss, then the boss’ boss, and so on. It’s no different for Unity’s main character, Arno Dorian, who is driven to revenge by the unsolved deaths of both his father and his step-father. Before he has the chance to follow any substantial leads, the Assassin Order conveniently swoops in to teach him the lethal skills to deal death and to do so quietly. He is less hands-on with the revolution in France than Connor Kenway was involved in the American Revolution, although Arno takes a break from his personal goals in Unity’s cooperative missions. These assignments play like episodic vignettes where Arno and other assassins do their part in helping the uprising in Paris.

Unity’s co-op missions echo the meaty operations in the last two Splinter Cell games, not the gamified bot arenas of prior Assassin’s Creed collaborative modes. This is a good thing. Whether accompanied by an AI companion or not, these immensely goal-oriented missions are as involving as anything in the single-player mode in Unity or any other Assassin’s Creed game for that matter. This mode becomes all the more engrossing if you can manage to team up as a like-minded foursome. Multiplayer is aptly unforgiving if any one friend decides to go rogue without telling the rest of the team. This collection of multi-phase assignments helps make up for the brevity of the Arno’s story, one of the shortest campaigns in the series.

Rather than ambitiously weave the events of the co-op adventures with Arno’s quest for vengeance, Ubisoft was practical enough to separate the two sections in Unity’s progress tracker. It’s just as well; the progression menus throughout the series are some of the slickest user interfaces of the last seven years and it satisfies my obsessive compulsiveness to see Unity’s optional content neatly arranged should I manage to find the time to shoot for 100 percent completion.

The moment to moment experience of a Unity playthrough stays faithful to the Assassin’s Creed formula, unfolding like a mixtape of familiar series objectives. That includes tailing people, sneaking in places you’re not allowed to be, and of course, assassinating targets. Not having forgotten the criticisms leveled at ACIII for its abysmal chase sequences, the obligatory pursuits in Unity are manageable and often easy. The combat sequences, story-triggered or otherwise, are even more plentiful, especially when you have to watch where you’re going in Paris’ crowded streets, lest you attract the attention of law enforcement. Compared to other games in the series, I noticed that Arno manages to get away with more assertive hits with the sword. This is a contrast to other Assassin’s Creed fighting systems where success depends on letting the enemy make the first move and reacting accordingly. You’ll still benefit greatly by sticking to this approach in Unity—it’s just that you’ll have also be allowed to attack first more often, should you feel impatient. And if you’re one of those players who has no shame in the exploitative benefits of the smoke grenades, Unity will let you get away with at least two kills per grenade.

Being able to afford and restock on smoke grenades or your basic gear and armaments of choice with little need to upgrade undermines what would have been an otherwise deep character progression system. Just mainlining the story missions unlocks enough essential upgrades that there’s very little incentive to take a break and explore, let alone earn the means to improve Arno.

As a contrast to the dearth of man-made structures higher than two stories in Black Flag, the many of Parisian buildings three floors or higher is a welcome change. It’s a well-timed adjustment given that this is an Assassin’s Creed where the size of a room in comparison to the character sizes have never been closer to scale. This makes the structures in Paris look even larger compared to the buildings of Italy and Constantinople in prior games in the series.

The polished, albeit worn look of the inlaid wood floors in the more posh estates are just as impressive as the sea waters and leafy bushes in the PS4 or Xbox One versions of Black Flag. That said, Unity’s Paris is also a city abundant in grit. You see it in age-old, water-damaged chimneys among the myriad rooftops and the dark, wooden shacks in the slums.

It’s arguably the prettiest Assassin’s Creed to date, provided you’re only judging the game by its screenshots. With an urban unrest in this time period, it’s easy to get swept up in the idea of packing a game like Unity with mobs of unhappy Parisians. When Arno is so focused on revenge, it’s often hard feel his connection to the unrest in the background. And if the AI crowd is meant to function primarily as background decoration, Ubisoft did not have to go overboard like it did in the interest of realism. This certainly shouldn’t have been the case if these high character counts contributed to the game’s disappointing framerate. This framerate is unequivocally the worst in the series, even more so than the version of Assassin’s Creed Liberation on Vita. These performance issues are only compounded by the occasional appearance of bugs. These issues—like AI companions stuck in collision or the game not recognizing a completed objective—are never severe enough to make me restart the game, but would force me to at least restart my current mission.

Furthermore, Navigating your way through Paris is a puzzling and cumbersome exercise that is in some way a throwback to the control configuration of the Ezio trilogy. I understand how and why the Renaissance period was so well regarded for fans of the franchise, but I also appreciate the streamlined controls introduced in ACIII that were slightly improved in Black Flag. Even as a city as vertical as the one in Unity, having specific buttons to parkour up and down feel as unneeded as the increased headcount of AI bystanders. This control scheme even shows signs of inconsistency, such as having to use the same button for hurdling over obstacles as you do when sliding under them.

I know better than to speculate what challenges Ubisoft faced in annualizing an open-world series with new locations in each installment. Yet when playing something as unrefined as Assassin’s Creed Unity, I can’t help but wonder how much better the game would have been were it given six more months of polish. What we have instead is a decently functioning Assassin’s Creed that wraps the 18th century timeline not with a satisfying and fitting climax, but instead with an unfortunate sense of relief that this period is finally over.

Disclosure: Our review copy of Assassin’s Creed Unity on Xbox One was provided courtesy of Ubisoft.