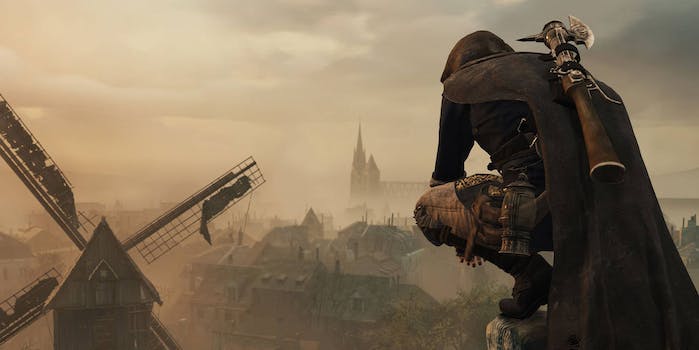 The latest patch for Assassin's Creed Unity is massive.

We’re all used to postgame patches, but seldom are they ever this big.

Patch 4 for Assassin’s Creed Unity just went live for Xbox One and PS4 owners, and it’s a whopping 6.7GBs. That’s the size of an entire game.

Patch 4 for PC should be live later this week.

Ubisoft updated its Assassin’s Creed blog to detail why the size of the patch is so large.

Part of the team’s effort to enhance frame rate for players involves replacing and updating portions of the Paris city map where we are seeing issues. This explains the large size of this title update (6.7 GB). However, since a large portion of the patch replaces existing files the net increase to the game’s overall size will be less than 6.7 GB.

It’s becoming painfully obvious that Assassin’s Creed Unity needed a bit more time to incubate before its November launch. The game has been plagued with various glitches and problems. It’s been part of a growing trend of developers trying to release a game on time hoping to fix any issues via a day one patch.

It has caused quite the ire amongst gamers, so much so that many are decrying the need to pre-order games. There was also a slew of content planned for Assassin’s Creed Unity. But due to all the issues, Ubisoft has cancelled its season pass.

A season pass for video games is when users can get a discount on downloadable content packs by pre-purchasing it all in a bundle. For those that had already purchased the season pass, Ubisoft will be offering a free game as compensation by Christmas. The Dead King’s DLC pack will also be free for all owners of Assassin’s Creed Unity.

Hopefully future Ubisoft games won’t run into as many issues.