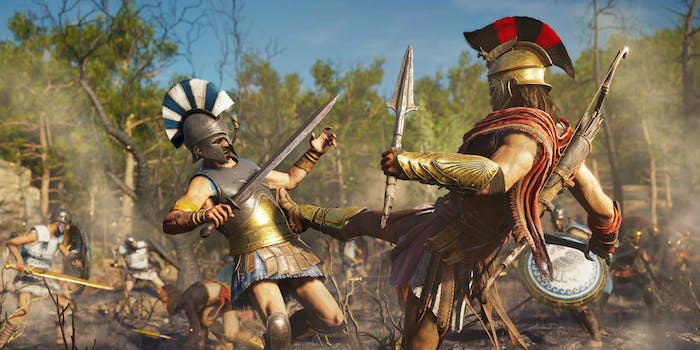 The game falls short of a truly epic evolution.

If ever there were a game to affix the word “odyssey” to Assassin’s Creed, Odyssey may be it. It’s a stupendously (if stupidly) large world brimming with character, combat, and eagle dives. In Odyssey, the Assassin’s Creed franchise takes one significant step closer to the game it seems to have been trying to be for years, one that lets players direct the assassination lifestyle their own way, echoing elements of The Witcher III: Wild Hunt and Fallout 4. Sadly, like so many epic Greek myths turned tragedies, a few shortcomings prove to be an Achilles’ heel that hamstrings the overall experience.

After an appropriately cinematic introductory sequence, Assassin’s Creed: Odyssey begins how I think all Assassin’s Creed games should: With a literal sucker punch to the face. From there, it’s up to the player to choose how they deal with the offenders, with a pinch of mercy or a ticket straight to Hades. Choice reigns supreme in Assassin’s Creed Odyssey, and it shows in how your character evolves. As either the burly Alexios or the take-no-crap Kassandra, your mercenary (or “misthios”) will find themself setting out on, ahem, an odyssey to seek justice against your family for throwing you and your sibling into the sea at the behest of radical zealots. What begins as a quest for revenge turns into a power struggle between the warrior society of Sparta and the capital city of Athens.

From the get-go, Odyssey’s tale feels like a far more personal one, if only because it’s finally you choosing how your assassin responds to every threat or cry for help. In many ways, it’s playing a bit of catch-up to RPG heavyweights like The Witcher III, or even smaller fare like Life is Strange 2. There are big, explosive moments where you can choose to exact bloody, unflinching revenge on a poor soul, or just fiercely chide them for their cowardice. There are small, seemingly insignificant moments that don’t seem like they’ll ever come back into play, but find ways to rear their heads and remind you that this world exists alongside you, not for you. Early on, a side quest sends you through a small town rendered barren by fire. A small family is cowering outside its home, surrounded by soldiers that say the local populace are all infected with a deadly plague and must be eradicated. Do you save a powerless family and put an island of hundreds or thousands of people at risk? The more immediately sorrowful choice results in a tough conversation with a young friend about the nature of life and death, and honestly, it’s a conversation and a choice I never anticipated making in an Assassin’s Creed game, at least on that scale.

These role-playing opportunities are bolstered by a generally solid-to-great script. Kassandra’s voice actor works wonders as a woman fighting for answers in a cruel, war-torn Greece. She’s a hardened fighter, to be sure, but she has that same unwavering sense of justice and heart that made characters like The Witcher’s Geralt such a joy to follow. Even when the dialogue choices presented to you merely result in a different attitude to the same conversation, it only occasionally feels like the story is falling over itself to fit things together. The worst of this is during certain side missions that may start with some interesting character motivations, but ultimately result in bad dialogue like  “collect three items for my thing, please.”

The world of ancient Greece itself is a vast and gorgeous one, even if it doesn’t immediately feel as strikingly different as the less-ancient Egypt of Assassin’s Creed: Origins. You’ll traverse wooded forests full of galloping deer, walk among densely constructed cities full of marble statues and columned meeting halls, sail a churning ocean once again, and infiltrate countless enemy strongholds. Odyssey introduces a new “exploration mode” as the default over a more traditional waypoint-to-waypoint structure. You’ll be given some clues as to where your next lead is, and while I really enjoy the idea of taking my time to learn the geography of the land and naturally discover new places, the clues are a bit too obvious most times. Oh, my target is in a structure on the west hills of Megaris? I wonder if it’s the sole question mark icon on the map.

While on a surface level, Ubisoft is, as always, able to pump millions of dollars worth of graphical and technical proficiency into its games, like Origins, it can all easily begin to feel too similar, too fast. While you’ll never mistake Athens for one of the smaller cities dotting the islands, each whitewashed building facade does begin to look much like the previous one you ran by. For sure, Ubisoft is able to make each district feel like its own place (the wealthier districts tower over the populace with appropriate opulence while the slums are sloshing in their own water supply), but it can begin to wear on a player as you sprint from one objective to another. This is only amplified when you venture into enemy camps or fortresses. As always, Ubisoft excels at making each of these locations feel relatively unique from an architectural standpoint, but by the time you’ve burned your 50th identical war supply chest or released a prisoner from the same cage for the 30th time, you’ll likely grow tired of it all.

On that note, when it comes to the actual assassin-ing, Odyssey shows that Ubisoft is right to again take a year-long break from Assassin’s Creed. You’re still slinking around, stabbing dudes in the back, stabbing dudes in the front, climbing walls, crawling through bushes, and sailing the seas. The vast majority of gameplay still flows well enough. It’s always satisfying to leap from a column and make a pancake out of a guard.

It’s frustrating then that Assassin’s Creed Odyssey still suffers from a lot of the same leveling problems as Origins. Weapons and armor are still a matter of collecting higher and higher-level loot, and this often becomes a chore thanks to the fact that enemies are capable at either defending against lower-tier weapons or chewing through lower-tier armor. That’s not a bad thing on paper, but it does force you to spend a lot of time in menus constantly deciding whether or not to switch gear.

Early on, I decided that I really wanted to be a spear warrior, poking at enemies sweeping the area before they ever got close. Unfortunately, I spent all of levels 12 through 18 without finding a new spear to replace my old one, forcing me into weapons categories I had no interest in. Sure, you can spend money and resources like wood and precious metals to engrave a weapon with a status effect, but you’re still going to find another weapon in a level or so that renders it obsolete in the face of a higher-level enemy. You’re able to pay even more money and resources to upgrade a weapon or a bit of armor to your current level, but the price is usually steep, and it pulls from resources that could be used on your boat or any other piece of increasingly out-of-date gear.

While it’s understandable that this is Kassandra’s or Alexios’ story, it never quite feels like you get to fully play them the way you’d like. Odyssey shows it understands what a role-playing game looks like, but the cosmetics fall short when it comes to gameplay.

This all helps to make open combat (and some of the stealth) more chore-like, too. While cutting through enemies can feel generally satisfying, it too is made arduous by poor leveling design. I cannot tell you how many times I’ve come across a burly warrior out for my skin, only to spend upward of five minutes hacking away at his frame, over and over.

Ubisoft has likely made Assassin’s Creed Odyssey and Origins this way because it encourages players to seek outside quests and side activities, but these rarely feel like enough to fill the gap. Not every side quest is a story worth sharing. Plenty devolve into simple fetch quests, like gathering jewelry for a little girl’s imaginary friend’s party or signing a philosopher’s name onto a census record. The quest structure may imitate The Witcher, but it certainly never reaches its lofty storytelling heights. You will most certainly never run out of things to do in Assassin’s Creed: Odyssey, but you will wonder if you want to do them for the 20th time.

Oh, and what a plethora of distractions there are, much of them reskinned to fit the Greek context. The boat-sailing is plenty fun and cinematic, with great warships crashing into each other with a force that makes it clear why Ubisoft is pursuing a standalone sailing game, even if enemy ship A.I. is wonky at times. Legendary animal hunting is the closest Assassin’s Creed has ever felt to Dark Souls, with giant versions of beasts staring you down on nature’s battlefield.

Then there’s the new mercenary system, which unfortunately feels like a pale imitation of Shadow of Mordor’s nemesis system. These bounty hunters will start seeking you out the moment you start stealing too many things or killing in plain sight, and you’ll be forced to either pay the dues or defeat them in battle. Unlike Shadow of Mordor, where enemies remembered specific details about your past dealings with them and generally made a memorable show of challenging you, Odyssey’s mercenaries hardly speak at all, and generally all fight the same way except for a few tricks. While it makes sense too that they would hunt you while you pursue other goals, the mercenaries are also prone to some ridiculous rubberbanding.

Assassin’s Creed, like history, has almost always been about the little steps toward something better. There are the revolutionary moments like Assassin’s Creed II and Origins, but Odyssey lands somewhere deftly in the middle of the pantheon. Kassandra and Alexios’ tale is one that will stick around in the hearts of series fans, I’m sure, but it comes at the cost of reminding us just how quickly Ubisoft’s formula can feel as ancient as the worlds we get to live in.