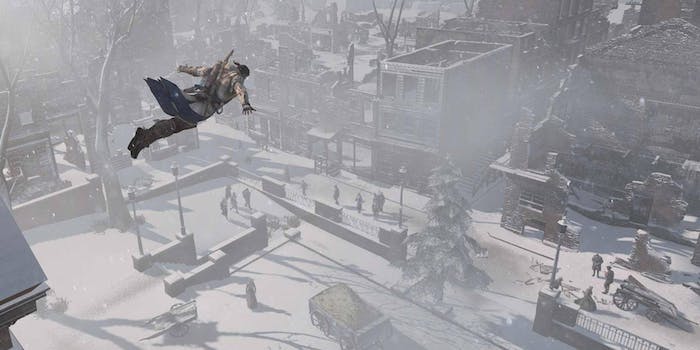 One of the defining characteristics of the Assassin’s Creed franchise is the ability to scale massive historical structures and jump off them into a stack of hay. This is known as a “leap of faith.”

It’s definitely exhilarating, and doesn’t seem to get old no matter how many times you do it. Of course, some physical realities are brushed aside for the sake of smooth and fluid gameplay. Students at the University of Leicester in England found out just how realistic those jumps are.

The article, which cites Wikipedia as sources for human tolerance of G-force and body surface area, posits that “while loose straw does undoubtedly provide cushioning from falls, the amount of straw used to cushion a character’s fall is always the same, no matter the height of the jump.” In reality, the higher the jump, the more straw necessary to cushion the fall.

For a landing to be enough to walk away from, acceleration must be decreased to 25g, or 25 times acceleration due to gravity. That means the 1.5-meter-high haystack that your assassin falls gracefully into could realistically only be from a leap that’s around 12 to 13 meters high. That’s still really high, but nowhere near the actual jumps found in the game. As the article explains, “If the jumper is willing to suffer severe injuries (100g impact), the maximum jump height increases to 50m.”