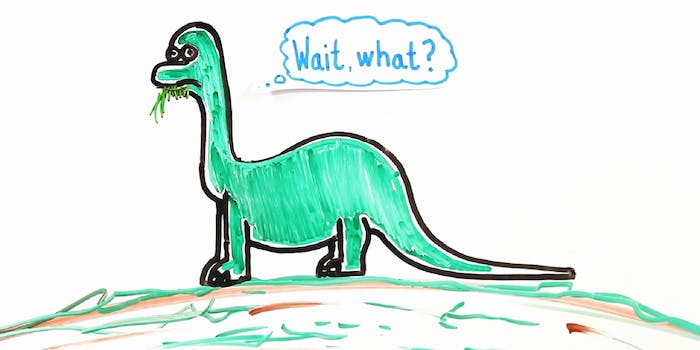 The 6 craziest extinctions in Earth’s history

Plus why we're on the verge of another one.

If you’re not already finding out what animal you are or catching up on YouTube’s Earth Day livestream event from last weekend, another cool way of learning the importance of environmental protection on Earth Day is by finding out the biggest changes our planet has gone through since its inception—particularly those that have caused a number of species to be completely eradicated.

It sounds a bit morbid, sure, but the brainy duo behind YouTube’s AsapSCIENCE has a way of transforming terrifying facts of science into adorable and entertaining moving whiteboard drawings so that viewers will actually pay attention and give a damn.

In this particular installment, Mitchell Moffit and Gregory Brown tell us the story of how carbon dioxide pretty much played a humongous part in almost every single mass extinction recorded. It also features a cute drawing of a dinosaur evolving as well as a speedy run-through of how we humans somehow developed from a “small, scuffling rat-like creature.” Lastly, it showcases what the world is like today, and how humanity’s actions are simultaneously destroying it and setting it up for another annihilation.

Once you’re done realizing that humans are basically bigger jerks than carbon monoxide, you can learn about a few animals that are super-awesome (but also super-extinct).