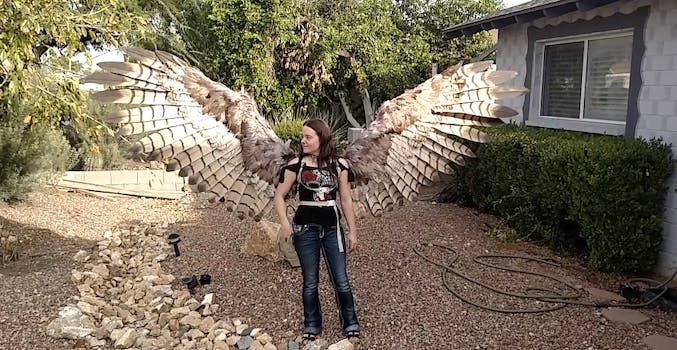 Just be careful of your wingspan if you're standing next to the punchbowl.

Noriega, who lives in Arizona, told the Daily Dot in an email that she began making wings as a hobby simply because she loved them. Now, however, she makes them for a living, and her latest project is a set of pneumatic, articulating wings that can win any costume contest.

Noriega said that she is always looking for ways to add realism to her projects and that deviantArt user Bushitaka inspired her to try out this project.

“I started with motors like his, but the design was too complicated for a customer to be expected to fix if something went wrong, and it made a ton of noise when opening and closing,” she said. “I did a redesign of the automation system with pneumatics and it worked out really well.”

It took her about 120 hours to build the wings, and she described the response as “a bit overwhelming.” She had recorded a video to showcase the final product; within a day of her posting it, the clip hit Reddit and amassed more than 100,000 views.

“I never expected it to go viral,” she wrote. “I have so many messages I have hardly been able to keep up.  Not a bad problem to have, but I feel bad that it is taking so long to get back to everyone!”

It might be too late to snag a Noriega original this Halloween, but for those who want handmade wings in the future, she’s selling her creations as The Crooked Feather on Etsy, and there are more examples of her work on her Facebook page.