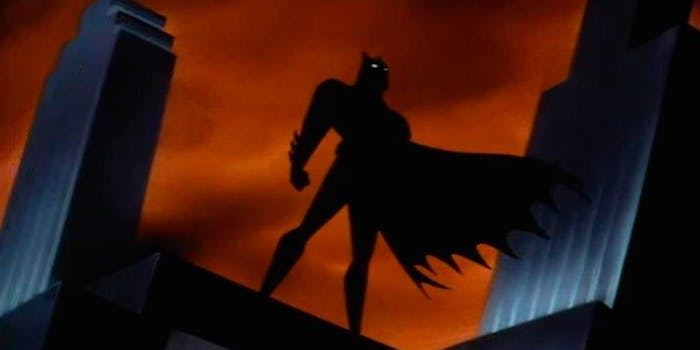 Inside the Arkham Sessions, a podcast that psychoanalyses ‘Batman’

A professional psychologist takes a deeper look at 'Batman: The Animated Series.'

If you grew up in the 1990s, Batman: The Animated Series was probably an important part of your cartoon regimen. The Warner Bros. series offered a unique portrayal of Gotham, from the distinct animation style to the slightly darker type of storytelling that made the show enjoyable for adults as well as kids.

With just 85 episodes, the show left quite an impact on the Batman universe. The voices of many of the characters would become thought of by many as the voices of the characters, including Mark Hamill’s Joker—a role the Star Wars alum and prolific voice actor would reprise for years. It even gave us new characters who have become Batman staples, such as Harley Quinn.

Between the groundbreaking influence of the cartoon and the nostalgia of looking back at it, perhaps it is no surprise that over the last year the characters and stories have become the focus of a podcast called The Arkham Sessions. The podcast—whose title references the Arkham Asylum from the franchise—is hosted by clinical psychologist Dr. Andrea Letamendi and Shout! Factory director of Blu-ray and DVD production Brian Ward. Each week they offer a psychological analysis of the series. The show was born from its creators unique combination of interests.

“It seemed that I was constantly talking about two things in my spare time: psychology and Batman. Brian suggested that we make that discussion into a show by focusing specifically on one of my favorite series, BTAS [Batman: The Animated Series],” Letamendi told the Daily Dot.

Ward first came up with the idea during the summer of 2013 when he saw Dr. Letamendi give an interview in the Warner Bros.’ documentary Necessary Evil: Super-Villains of DC Comics.

“I already knew she was pretty amazing at psychoanalyzing various fictional characters, through reading her website and having regular chats with her. What I didn’t know was just how intimately she knew Batman: The Animated Series. When you watch the documentary, it seems like each of her answers is crafted around that specific take on Gotham City,” Ward said. “So I suggested we do a weekly podcast, where we basically spend an hour or so watching each episode and taking notes and then flipping on the microphone, as we discuss the episode with her psychological P.O.V.”

Letamendi is certainly no stranger to examining the psychology of Batman and other fictional characters. She often speaks at various conventions on such topics and even appeared in the Batgirl comic book series by writer Gail Simone as Barbara Gordon’s official psychologist.

“I’ll be honest that I was skeptical about whether anyone would be interested in hearing me analyze the Joker or talk about how Mr. Freeze became so ‘cold,’ but I jumped at the chance to engage in some deeper conversations about these characters who shaped a huge part of my geeky fandom,” Letamendi said.

The Arkham Sessions launched in December 2013 and since then has produced 47 episodes. Before recording each session, they watch the episode they plan to discuss and take notes, but save the majority of their discussion about it for the podcast.

“We like to treat the podcast like it’s a real conversation about these characters that we’ve just seen do these outrageous things. I have questions that the layperson might have and then her responses inevitably prompt follow-up questions. And, sometimes, my own harebrained hypotheses,” Ward told the Daily Dot.

Letamendi said she takes time to “lift out” psychological themes of each episode after re-watching them, “paying particular attention to the lessons the episode teaches us about psychological science.”

“I refer to research studies, historical cases, and psychological theory to help explain the behavior of the primary heroes, villains, and everyone in between. It’s not just about telling our audience what makes these characters ‘tick’—it’s providing and explaining the empirical evidence that supports our interpretations. It really is a very scientific show, despite the fact that we’re talking about a cartoon,” she explained.

If the premise intrigues yo,u but you’re worried you’ll be behind if you haven’t watched the episodes in years, never fear. Letamendi said she and Ward don’t expect listeners to have seen episodes or even know about the series exactly. When they start recording Ward explains what happened during the show’s episode to inform listeners before they move on in their discussion, often spending a lot of time discussing the villain’s history, motivations, and any hope they might have for recovery with psychological themes being brought up throughout.

Even though the podcast deals with fictional characters and situations, listeners can learn quite a bit from these discussions.

“It’s funny, the show is a cartoon from the early 90s, but it actually offers a valuable amount of lessons when it comes to human behavior, the development of mental illness, stigma related to mental suffering, and other themes that are rather adult in nature. We’ve talked about subjects like clinical disorders, cognitive and memory disorders, antisocial behavior, brain trauma, suicide prevention, stalking, relationships, conformity and social psychology, and even hypnotism. And there’s still so much to cover!” Letamendi said.

These lessons may not just interest listeners but have an important real-world impact. Letamendi has received emails from clinicians, scientists, and students who have told her the show helped or inspired them in their career. She and Ward have also heard from others about their personal struggles and experiences with family members or partners with mental health illnesses.

“I cannot put into words what that feedback means to me. These letters literally come from all over the world, so it is a reminder to us just how universal these experiences are, and how important it is to raise awareness of mental health issues,” Letamendi said.

Since its premiere a little more than a year ago, more people are discovering The Arkham Sessions. The show has an expanding social media presence, episodes were released weekly on ComicsAlliance, and recently it received the award for best 2014 podcast from fellow podcast The Geek Speak Show. Looking back at this first year, Ward isn’t completely surprised by their growth because Letamendi’s experience makes the podcast stand out.

Ring in 2015 by helping us celebrate our 1-year anniversary with our analysis of BATMAN: MASK OF THE PHANTASM! https://t.co/DVxOxxuv3I

“Sure, there have been people who’ve written about Batman or taught classes about Batman but this is someone that actually spends her time in the hospitals where she might see someone with these very same mental health issues daily. Or where she might come across a wounded veteran, whose job it is to strap on body armor everyday and protect a city with his or her friends—friends that are also wearing body armor, mind you. Heroes without super powers, like Batman and Robin and Batgirl, are real. And so are villains. Believe it or not, the Joker could be just as real as you or me. And she’s seen him. And she’s telling you about him every week. That’s new,” he said.

Overall the duo hope that people come away learning something about the human mind and psychological science while having fun along the way. In the new year The Arkham Sessions released a special episode to celebrate its first anniversary, and while the duo may be beyond the halfway point in covering episodes of the series now, that doesn’t mean you’ll be seeing the end of the podcast anytime soon.

“I’m certainly not ready to stop talking about Batman. So we’ll find something to move on to. After all, we know this incarnation of Bruce Wayne does age. We’ve seen him get older and carry on, with a new protege under the cowl. I’d certainly want to know what he’s like as a curmudgeon billionaire that has to watch a kid like Terry McGinnis represent his good name. [It] could be fun,” Ward said. “But it could also be fun to flip the show entirely on its head and start analyzing a version of this character from scratch, without the baggage we’ve seen him acquire and carry throughout 85 episodes. Imagine what [Letamendi] could say about Adam West’s Batman. Batman’s going into his 76th year. This podcast may never end. And I’d be OK with that.”

Find episodes of The Arkham Sessions on iTunes, underthemaskonline.com, and Libsyn.

Image via The Arkham Sessions/Twitter