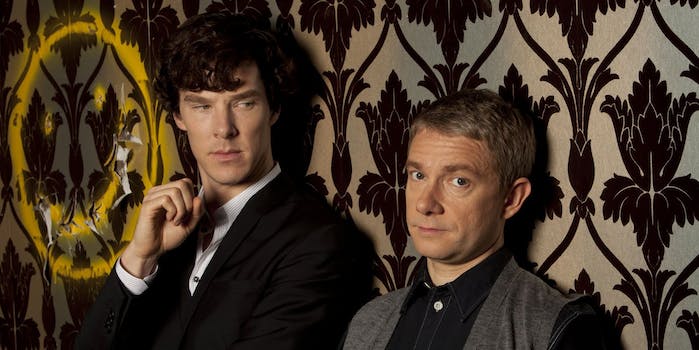 What this year's unofficial fanfiction pairing census tells us about popular culture.

Why do some characters inspire a ton of fanfiction, while others are perennially ignored?

The true answer would probably require an entire book to articulate, but this is just one of the questions raised by this year’s unofficial census of the most popular fanfic pairings on Archive of our Own.

One of Ao3’s strengths is its tagging system, which is stupendously in-depth. It allows writers to make their work searchable through various categories including fandom, pairing, word count, and an ever-expanding list of more specific content tags.

These tags make it very easy to see which topics are popular among fanfic writers—or at least, among the fanfic writers on Ao3. Using the relationship pairing tags, Tumblr user centrumlumina has figured out the 100 most popular pairings on Ao3, a sequel to last year’s census.

The top 10 pairings are easy to predict if you’ve ever spent time with the most popular fandom sections of Tumblr and Twitter: Sherlock, Supernatural, Teen Wolf, One Direction and Marvel movies, with a couple of old favorites from fandoms like Merlin and Harry Potter.

The most noticeable trend is that 71 of the top 100 pairings are male/male slash, with the vast majority of popular relationships being between two white characters. The first character of color shows up at  No. 23: Scott McCall from Teen Wolf, paired with his ex-girlfriend Allison Argent.

This male-dominated, predominantly white leaderboard seems at odds with the progressive subculture of fanfic readers and writers. In fact, the overwhelming success of white male slash pairings has become rather controversial in recent years, partly thanks to a growing awareness of gender and racial bias in pop culture. The most common explanation is that just like everyone else, fanfic writers are susceptible to race and gender bias, although admittedly there are a few other factors to consider.

First of all, Ao3 has always been more geared toward the side of fandom that favors male/male slash fiction, which is usually inspired by TV shows and movies with close male relationships. You’ll find way more hetero fanfic on sites like Wattpad and fanfiction.net.

This leads onto a second underlying reason for all that white guy slashfic: People play in the sandbox they’ve been given. The narratives of Sherlock, Supernatural, Teen Wolf and even One Direction are all dominated by male/male relationships already, with female characters either in the minority or in the background. The fact that there are only three female/female pairings on this list may not just be a comment on fandom itself, so much as a sign of how rare it is to see a television show or movie that focuses heavily on an intense relationship between two women.

All this aside, it’s interesting to see the way Ao3’s most popular fanfic pairings differ from the public image of fanfic in general.

We’ve now reached a point where people can joke about fanfic on The Daily Show with the certainty that audiences will get it. But there’s still a pretty wide gap between the kind of fanfic that regularly makes the mainstream news (50 Shades of Grey and One Direction book deals) and the overwhelming popularity of male/male slash on sites like Archive of our Own.