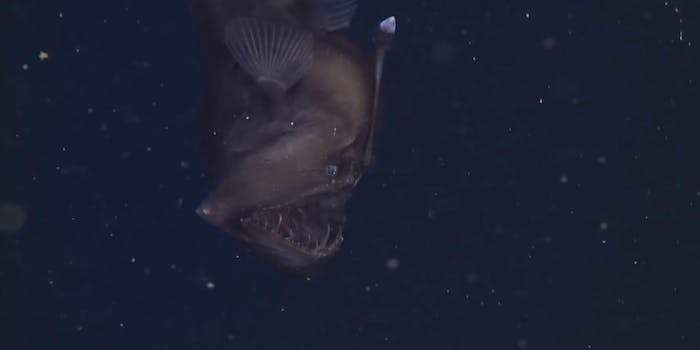 The Monterey Bay Aquarium Research Institute believes it has groundbreaking footage of a deep-sea anglerfish.

If you’ve ever pondered what exactly is lurking in the depths of the sea, some brand new footage is giving us all a better look at one of the rarest deep-sea dwellers.

For the first time ever, researchers believe they have filmed the deep-sea anglerfish or “black sea devil” in its natural habitat 1,900 feet below the ocean surface.

The video was captured on Nov. 17 by the Monterey Bay Aquarium Research Institute (MBARI). Senior scientist Bruce Robison led the remote vehicle dive in Monterey Bay that encountered the anglerfish.

“This is the first time we’ve captured this fish on video in its habitat. Anglerfish, like this Melanocetus, are among the most rarely seen of all deep-sea fishes. The shining spot at the tip of the ‘fishing pole’ projecting from the fish’s head is a glowing lure. The anglerfish uses its light to attract prey in its deep, dark habitat,” Robison said of the discovery.

According to the MBARI’s video description, the deep-sea anglerfish is so elusive that “fewer than half a dozen have ever been captured on film or video by deep diving research vehicles.” Robison narrates the MBARI’s video and offers more information about this amazing fish, including the observation that the fish had broken tooth. “So far as we know, there is no tooth fairy in the deep ocean.”

Listen to Robison’s commentary and see the deep-sea angler for yourself in the video below.