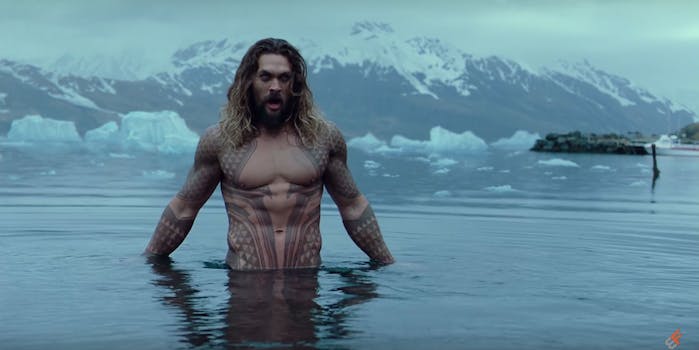 Here’s why you haven’t seen an ‘Aquaman’ trailer yet

The answer is pretty simple.

The next installment of the Justice League saga is still nine months away, but fans are starting to wonder, “Where’s Aquaman?”

Perhaps we’ve been spoiled by early previews for movies like Wonder Woman and Justice League, but the run-up to the Aquaman movie has seemed oddly quiet. Fans momentarily got excited for a rumored teaser trailer drop last weekend, but nothing appeared. Director James Wan explained why in a series of tweets.

Wan says his team is working on special effects for the film, and he’s simply not ready to debut a trailer yet. Much of the movie will likely take place underwater, so the CGI team likely has some heavy lifting to do. But Wan, who previously directed Saw and Furious 7, probably also wants a tightly controlled marketing rollout for the superhero blockbuster that’s due in theaters Dec. 21.

Warner Bros.’s last solo superhero movie, Wonder Woman, debuted to lavish praise from critics and audiences, but Justice League was a dud that underperformed at the box office. With little known about Aquaman’s solo debut, Wan is certainly aware that the first trailer will do a lot to shape public opinion about whether Aquaman is destined to soar like Diana or sink like a rock.

Given the stakes, we’re happy to sit back and let Wan put his best trailer forward when he’s good and ready.