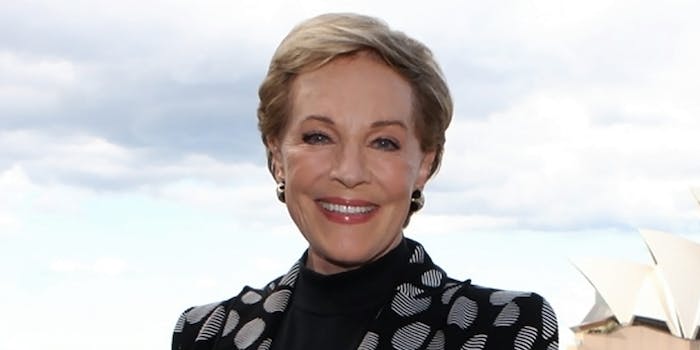 Julie Andrews has a cameo role in ‘Aquaman’

No one expected this piece of casting news.

With a new Mary Poppins movie on the way, you may be wondering what Julie Andrews has been doing recently. The answer is pretty indicative of our Hollywood landscape: She just recorded a CGI monster role in a superhero movie.

The 83-year-old actress joins Jason Momoa, Amber Heard, and Nicole Kidman in Aquaman, voicing the character Karathen. According to Entertainment Weekly, Karathen is “an undersea creature that holds the key to Arthur Curry’s (Jason Momoa) quest to unite the Atlantean and surface worlds.” The producers wanted to cast a classic British actress, and, well, that describes Julie Andrews to a tee.

Coincidentally, Aquaman will go head-to-head with Mary Poppins Returns at the box office, although you shouldn’t read too much into it. Julie Andrews has been wholly supportive of the remake.

Judging by this post from Aquaman artist Reilly Lohr, Karathen is a gigantic crustacean monster who appears briefly in one of the trailers. So, kind of a departure from Andrew’s typical milieu. Apparently, Karathen’s voice will involve some digital alterations to make it sound more monstrous, but we still expect to recognize Andrews immediately.

Aquaman comes out on Dec. 21 in the U.S., with preview screenings for Amazon Prime customers on Dec. 15.