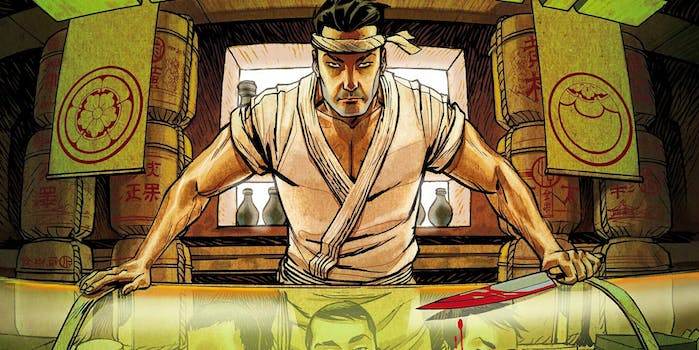 Anthony Bourdain’s love of Japanese culture shines in ‘Get Jiro: Blood and Sushi’

The world famous chef says he wants his next project to be a book of Japanese ghost stories.

Not long ago, Chef Anthony Bourdain and comics writer Joel Rose met a sushi chef who’d been in training for three decades—unable to advance until he fully mastered the fine art of cooking rice.

That chef’s story has an coincidental echo in Get Jiro: Blood and Sushi, the new prequel to Bourdain and Rose’s bestselling 2012 graphic novel Get Jiro. In this story, we follow Jiro, heir to Japanese yakuza (gangster) royalty, as he quietly pursues a career as a chef away from the violence of his everyday life. Like other long-suffering trainees, he, too, has spent years perfecting the arts of rice and humility; but he has a lot more blood on his hands than most other chefs. 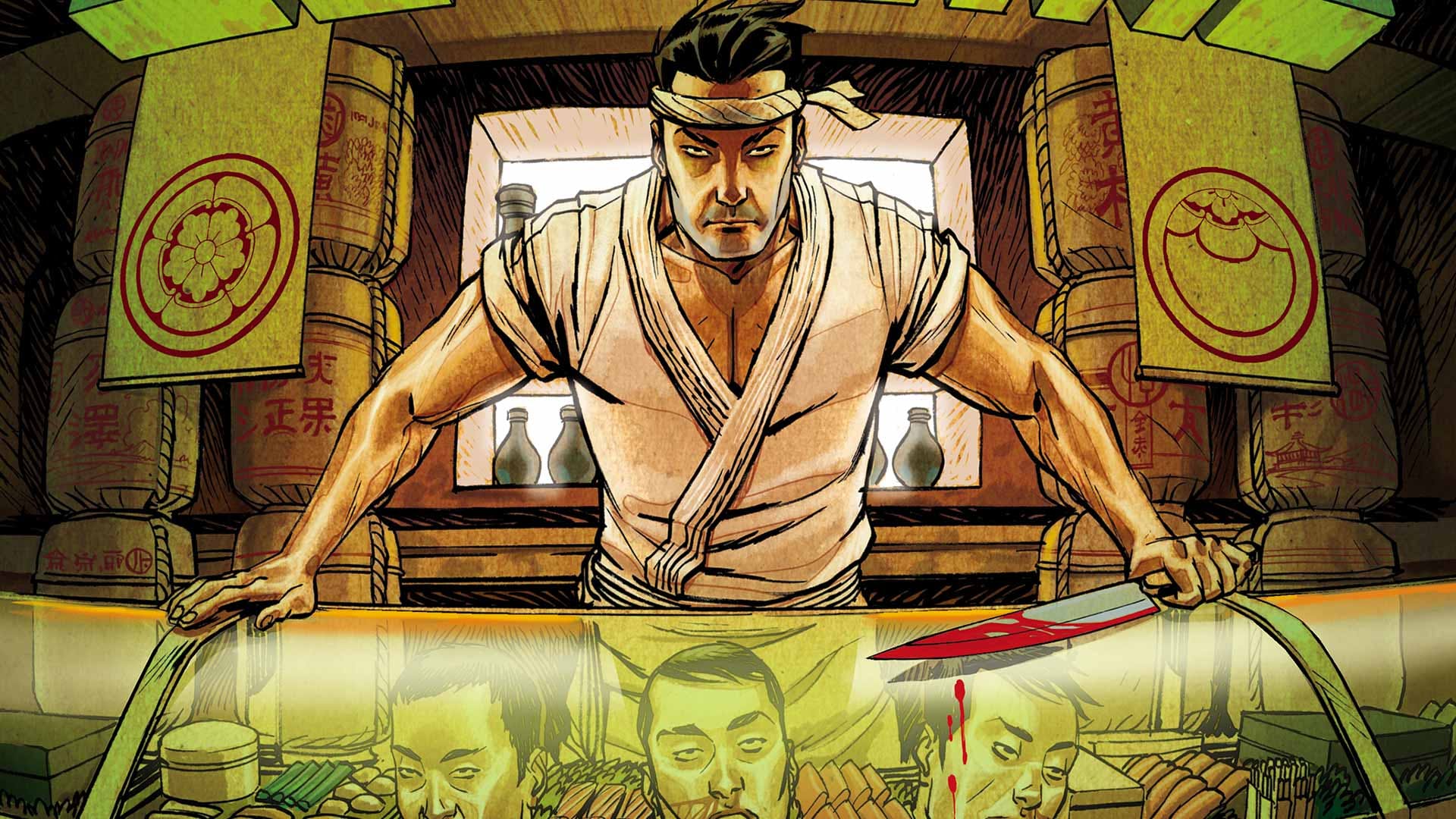 ‘Get Jiro’ cover by Dave johnson

A lifelong comics nerd, Bourdain echoes a bit of that humility when he speaks of Jiro’s many influences, both American and Japanese, despite his obvious pride in the story. Bourdain, Rose, and artist Langdon Foss topped the comics bestseller lists when Jiro debuted, much to everyone’s surprise; now Bourdain and Rose have delivered a violent, action-packed prequel with plenty of both blood and sushi. A melodrama in the fashion of the best yakuza films, the follow-up features art by Alé Garza, with colors once again done by José Villarrubia. Next week, to no one’s surprise, Jiro’s origin story also enters the New York Times bestseller list.

We caught up with Bourdain and Rose recently at a New York sake bar the world-famous chef chose for its similarity to the intimate atmosphere of izakayas (pubs) in Tokyo. There we asked them to share their secrets and a little of the mix of international comics and international cuisine that went into Get Jiro: Blood and Sushi.

So you had worked with Langdon Foss as the artist on the first book.

Anthony Bourdain: This was more of an existing genre story, so we wanted to go, I guess we were looking for more of a traditional pop-culture manga style than creating an entire universe, which was what Langdon was instrumental in doing—all the details in this future dystopic L.A., so much of that was his. But that was not the kind of story we were doing here, this was a piece about young men and family melodrama. We were looking to fit seamlessly into a particular style of look as well as story.

The look seems less stylized to me and more traditional. Did that affect how you guys wrote it? Did you do it collaboratively?

JR: No, I’m the guy who does like, the gruntwork. We collaborate on every level, but getting it down on the page is my gig, and I definitely kept it spare because we had that vision. It definitely didn’t feel like I needed to reveal too much. I didn’t go “every detail, every detail,” like Alan Moore would have done, and which I would do under different circumstances. I’m a quick writer.

I think it really fits because you had these sort of spare, Ozu-like frames where things are happen but it’s all silent, there’s no dialogue.

JR: The first 10 pages there’s not a word of dialogue.

AB: We were always thinking, the first 10 pages were really Ridley Scott, Black Rain; and we thought a lot about Tokyo Fist, Tetsuo, Battles Without Honor or Humanity was a really important influence, all of Takashi Miike’s films, Black Society—and then going back to the great Kurosawa gangster melodramas. There’s a style and a general scheme and a structure. It’s almost a telenovela. 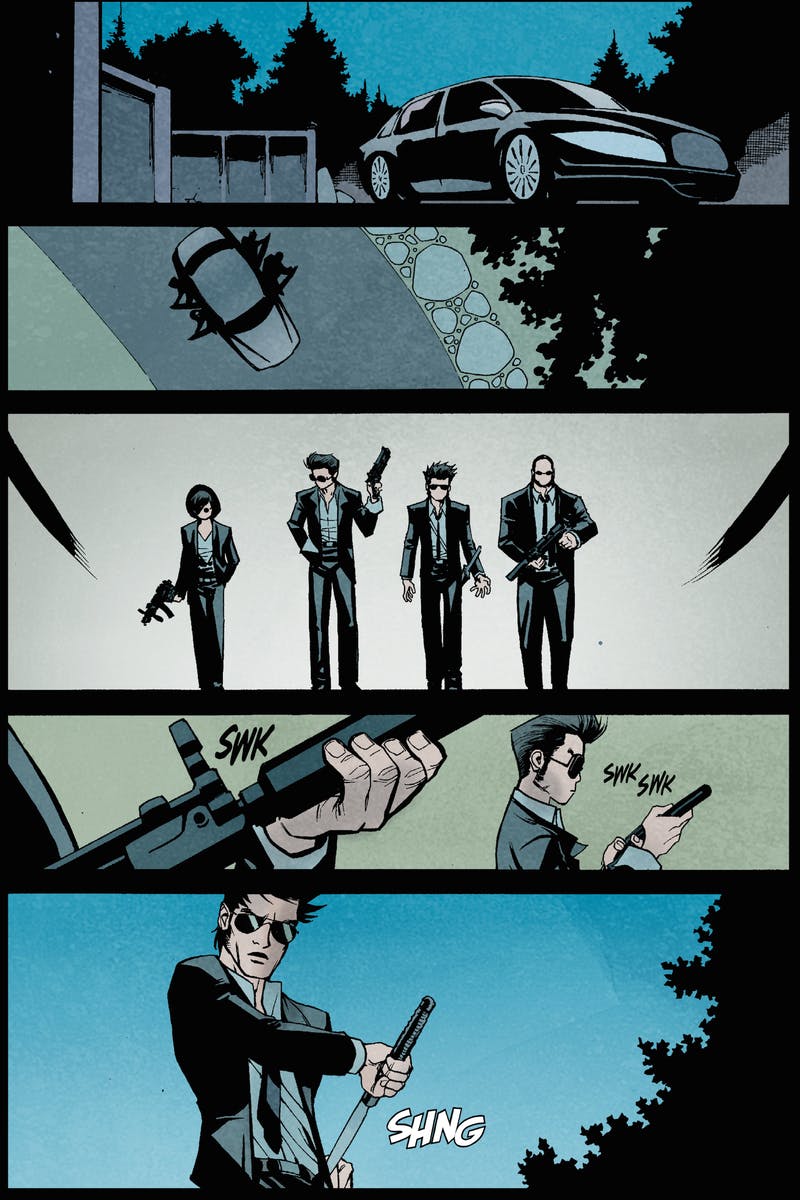 Doing this as a prequel is a really interesting choice because it feels like you’ve gotten more into the character and into his backstory and what makes him who he is. Do you feel like that’s something that has evolved over time since the first book, or was it already there and now you’re just getting to write about it?

AB: I like this guy. He’s a prince. As Joel has pointed out, He’s a prince for whom power is a birthright. Everything’s going his way. He chooses to subjugate himself, to become a student, in a relatively low-status profession. He chooses to bow his head and do a hard thing. That’s a little awesome. I relate powerfully to that.

Well, I think that’s something every chef goes through, metaphorically.

JR: The other night we had dinner together at my house with three Japanese chefs there, and one had worked at the same restaurant for over 30 years and only just got off of rice. Only just. After 30 years. 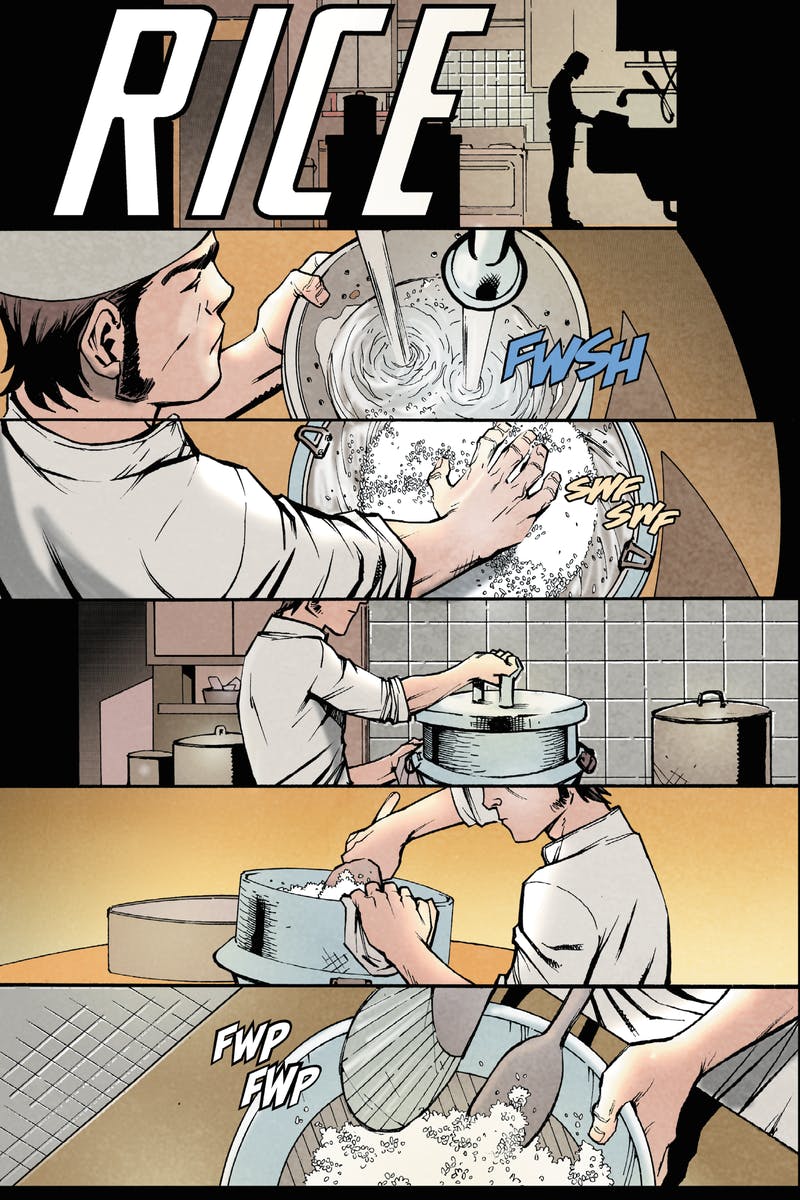 What was the moment that pushed him over?

AB: Your master says, “This rice is OK. You got the rice down, now it’s time for fish.” There’s that terrible moment in Jiro Dreams of Sushi when his son, who’s like 55, is [still] out there toasting the nori.

How much of Jiro is actually people who you know and have met in your careers over time?

AB: He has nothing to do with Jiro Ono [the subject of the documentary Jiro Dreams of Sushi]. I have to say that Yasuda-san was an inspiration. He was a bare-knuckle karate guy his whole life. He has these massive, dangerous, heavily calloused hands from driving them into concrete. He ran one of the greatest sushi bars in New York and went to Tokyo to start over again. The look in his pain in his eyes when meatheads came in and started junking sushi was very—this was something that stuck in the back of my brain and immediately came to mind when we started talking about it. I just thought it would be so cool if he could kill these fucking people. I would sit there and I would literally wipe the blood off my face and wait for the next course.

What was his reaction when he found out about Get Jiro?

AB: He has a sense of humor.

JR: We have a picture of Jiro Ono holding the book!

And obviously people think that they’re the same.

AB: And I love to think that he likes that! Because, you know, he’s dedicated his whole life to his career, albeit very differently.

What sorts of manga influences went into the art for this story?

AB: I think Oishinbo is something we thought a lot about, as an inspiration for both the story and the subject. That’s a series of both, on the one hand, incredibly detailed portraits of food and food preparation, and a relatively stylized culture of characters. We wanted that sort of boy-band hair from the characters.

AB: I haven’t thought about it, but I feel displaced from much of my life. I mean, I am displaced. I’m away from home much of the year.

In terms of Jiro and its place in this new Vertigo lineup that came out this year, I think people were really surprised.

JR: You know, I think when [former executive editor] Karen Berger left, and Vertigo and DC moved from New York to California, Shelly Bond took over. It’s a new age, a new era, and there were a lot of responsibilities foisted upon her. And she went all out to prove herself and she has. When I was at DC at Paradox Press, there must have been 10 editors and at least that many assistants there and all these titles. And there’s a responsibility to resurrect that and preserve it. You know, they’ve brought Neil Gaiman back, they’ve done some astonishing things. We’re just happy and thankful to be part of it.

There’s a giant renaissance happening in comics right now, there’s so much demand for diverse representation and new creators and new styles. Do you guys feel pressured to create in the middle of that or is it rejuvenating for you?

JR: We don’t feel pressure. We do what we do. We’re just trying to do the best we can and have as much fun as we can.

AB: I’d like to be a constructive element in society, but I fear I fail! I’d like to be useful and instructive, but I kind of have my doubts that that’s really the case.

Are there plans for other books after this?

Bourdain: You know, I wouldn’t mind doing a series of Japanese ghost stories about y?rei and yokai [ghosts and monsters]. [Bourdain points to his latest tattoo]. [They’re ] passionate, filthy, a lot of blood, a lot of necrophilia—perfect!