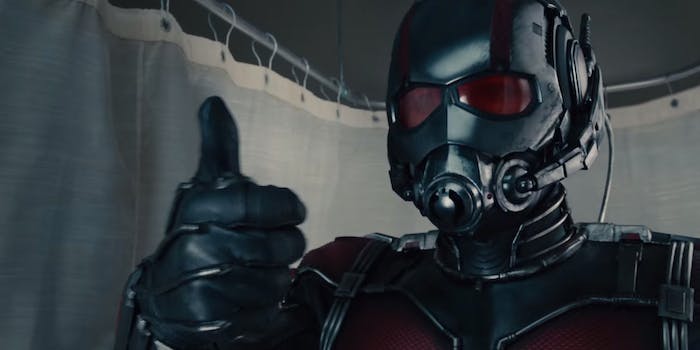 Ant-Man's super-foe finally has a snazzy suit to go with the intimidating name.

With the release of Marvel’s Ant-Man drawing nearer, we finally know what one of the movie’s main characters looks like.

For comparison, here’s how the original costume looked in the comic:

Although the photo may not look like much, for fans eager for more info it’s a big step forward. And fans did seem enthused about the reveal:

Ant-Man villian first image out of Yellow Jacket. I like this a lot!!!… http://t.co/EJvEvsyZme

Okay. Normally I'd think #AntMan is a dumb superhero. But the flip side of that, #YellowJacket IS FREAKING TERRIFYING http://t.co/TRvErPMhPs

Thus far we had only seen Yellow Jacket, a.k.a. Darren Cross, on an illustrated banner for the film in December. And despite the release of the first trailer, we still know very little about the beleaguered production, which underwent major rewrites following the abrupt departure of former screenwriter/director Edgar Wright. This was presumably to take Wright’s well-known satirical, comedic style and bring it more in line with the pomp and drama of a Marvel action film—a decision that Marvel executives may be kicking themselves for in the wake of the behemoth success of Guardians of the Galaxy

Now, not-Edgar-Wright director Peyton Reed is still attempting to debunk rumors that sections of the film needed to be re-filmed, telling EW, “We are going to do a little bit of additional photography, but we have not done any yet. It’s minor stuff.”

Yet? Guys, you do know your movie is out in two months, right?

Quick, distract us with details about supervillain costumes.

Yes, good. Surely costumes with plasma cannons will save this film from becoming a train wreck. Do plasma cannons work against ants? Should I be sliming my cupboards? Actually, do plasma cannons work against anyone? Is it just me, or does the plot of this movie so far sound like “Michael Douglas asks Paul Rudd to shrink himself because of reasons, and as a bonus he gets a sharp superhero costume that has no weapons. Oh, and the ability to talk to ants.” Meanwhile, Hank Pym’s former prodigy gets his own superhero suit, which maybe has something to do with the fact that he’s been stealing the hearts from slum-dwelling victims no one will miss.

Is this even still a comedy? Let’s hope we won’t have to fire a 21 plasma cannon salute over the grave of the film that could have been.