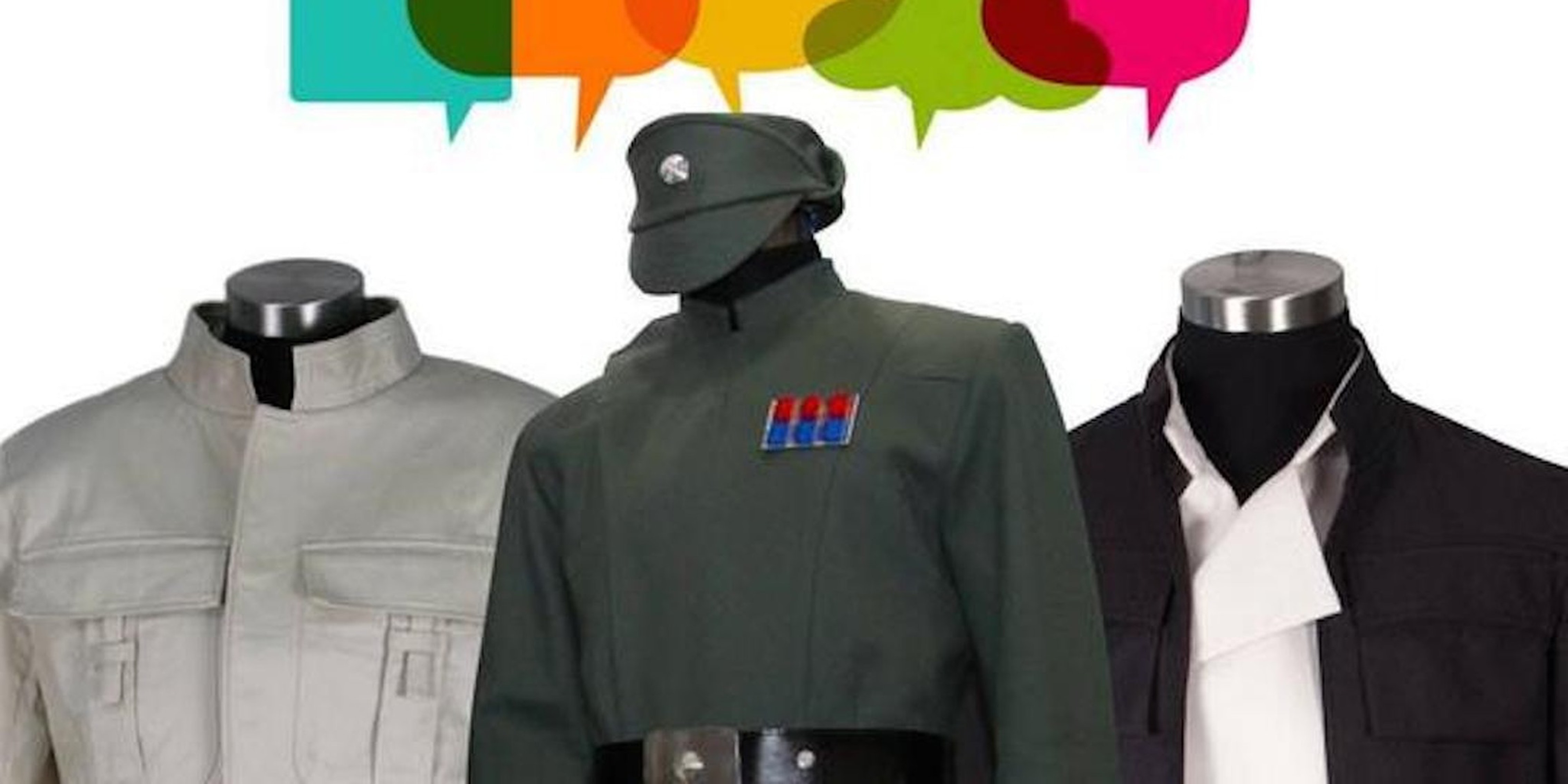 ANOVOS is looking for input from one group of customers in particular: women.

This month, online costume and prop replica company ANOVOS asked its Twitter followers to take a survey and share what Star Wars costumes they’d like to see produced next. Now ANOVOS is looking for input from one group of customers in particular: women.

When ANOVOS, a company that prides itself on creating screen-accurate uniforms and prop replicas, first announced their survey last week, they started a conversation with one follower who requested they make more costumes for women. Right now, ANOVOS offers costumes for women in their Battlestar Galactica and Star Trek collections. The company currently only sells Han Solo and Luke Skywalker items in its Star Wars line and only patches and a ring in its Ender’s Game line.

@ANOVOS Please make more costumes for WOMEN. I’d be thrilled to have anything Padme wore in @TheCloneWars series. :-)

@ANOVOS I did. I said “yes, please” to all the female costumes except slave (or as you put it, Dancer) Leia. I wish Clone Wars was included.

On Tuesday, ANOVOS took the encouraging step of actually reaching out to notable women in the Star Wars fan community on Twitter and asking for help with the survey. ANOVOS hopes to use the survey to help determine what types of soft goods or non-armor-based costumes its customers are interested in as the company develops its product lines for 2015. The very first question in the survey asks for the participant’s gender.

@clubjade we’re in need of more female perspective on our #StarWars survey! Would you mind helping us with that? https://t.co/6M8CYuGUMP

@fangirlcantina we’re in need of more female perspective on our Star Wars survey. Would you mind helping us?https://t.co/Xd7RWeiDHR

If you ignore the generic pilot, guard, and trooper costume options in the survey, there are 13 ensemble costume choices presented based on specific female characters from the movies, while there are 35 ensemble costume choices based on specific male characters. So it’s no surprise that the women in the Star Wars community responded to ANOVOS’ request. Many tried to spread the word about ANOVOS looking for more input from the female perspective.

@fangirlcantina thank you so much! We really appreciate it!-Sofi

ANOVOS did not respond to the Daily Dot’s request for comment, so it’s unclear whether the first Twitter conversation directly resulted in the company reaching out to women on Twitter this week. Still, it’s good to see a company go out of its way to reach out to women for their input, since there is clearly a demand for more options.

You can take the Star Wars survey here.