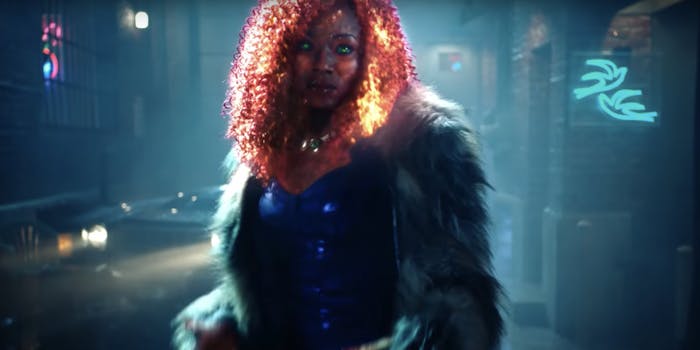 It's not the first time she's received hate online.

Fans are rallying behind Titans star Anna Diop after she was harassed online for her upcoming role as Starfire, an orange alien, in the TV series.

Diop, a Black actress, disabled her Instagram comments last week following the release of the first Titans trailer, Heroic Hollywood reports. Hateful messages about her race were left on her posts.

It's up to the Titans creative team to deliver a great live action interpretation. pic.twitter.com/ZyIjFYsf3M

The super absurd thing about something like this is, Superman is an alien from a distant planet who gains strength from the sun, and him being portrayed as white is normal. But Starfire, a fucking orange alien, being played by a black woman is cause to riot. https://t.co/iqyuZODVle

Diop previously faced vicious comments from fans unhappy with leaked on-set photos of DC’s new Titans series, which is based on the Teen Titans comic books.

“And though I am highly unbothered I do want to use this as an opportunity to say that tearing people down is not something that I tolerate,” she wrote on Instagram at the time.

The Root reports that the most recent pushback includes many colorist comments claiming Diop is the “wrong kind of Black woman” to play Starfire.

I also don't care for her skin color I just wish she was cast as a prettier person than Anna diop. Starfire is suppose to be beautiful even if she is a different color. Maybe Anna diop should of been meaghan in later season.

This is not the first time a woman of color has been bullied off social media. Kelly Marie Tran, who played Rose Tico in Star Wars: The Last Jedi, deleted all of her Instagram posts after users left racist and sexist comments on her page.

Titans is expected to premiere sometime this year.