Fanartist who accused Sarkeesian of art theft banned from Reddit

Did Anita Sarkeesian steal this Dragon's Lair fanartist's work, or does she have Fair Use? Either way, Reddit's not happy that the artist who complained was banned from doing a Reddit AMA.

Last week, artist Tamara Smith was something of an Internet hero: The woman who gave Reddit a real reason to be mad at Anita Sarkeesian by claiming that the controversial Tropes vs Women creator stole her fanart.

Now, a week after the drama unfolded, she’s been banned from Reddit after attempting to do an AMA. Although the AMA didn’t mention Sarkeesian, the AMA mods allegedly felt it was just an excuse to talk about Sarkeesian anyway. And Reddit’s not too happy about losing the opportunity.

After all, when you ran a notorious Kickstarter campaign that led to an onslaught of death threats, online abuse, and harassment, you might not want to give ammunition to your enemies in the gaming community and the “mens’ rights activists” communities on Reddit and 4chan. Sarkeesian has angered plenty of people over her gaming critique project, Tropes vs Women in Video Games. But failing to ask permission before using artwork is a pretty big misstep on the Internet, even for someone who doesn’t have such a polarizing history.

Smith is a gamer, fan, and professional gaming artist who was shocked a week ago to discover that her Dragon’s Lair fanart, created in 2009, was prominently featured on Sarkeesian’s logo for the Tropes vs Women in Video Games series: 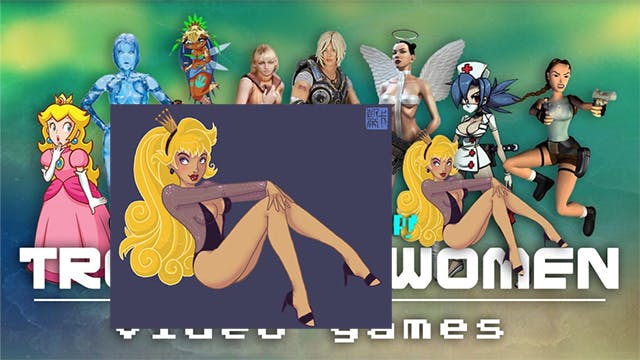 “How do I deal with my artwork being stolen?” she asked in a Tumblr post.

I don’t know how to approach this. On one hand, the project had a message I can identify with. On the other, no credit was given, my signature was removed, and they made $150k+ …

Silliest Part: they stole my fanart (drawn by a me, a woman and freelance video game artist) to use in marketing material to illustrate sexism in video games.

Sarkeesian compiled the logo for the video game series from a variety of sources and art styles, under the assumption that she had Fair Use of the artwork because she was repurposing its context. After Smith came forward to claim theft, she responded and said as much. But Smith wasn’t convinced. Though Sarkeesian contacted her shortly after the Tumblr post went up, Smith stated that she was “still waiting for valid nonprofit proof” that Sarkeesian’s work wasn’t being used to make money.

It should be noted that the Fair Use exclusion of copyright law can and has applied to for-profit ventures. Fanart is another tricky subject, since it, too, involves encroaching on the work of the copyright holder. But even fanartists retain copyright over their works of fanart. Since Smith isn’t sure Sarkeesian’s use of her art falls under Fair Use, she has every right to call attention to it.

Last Saturday, Sarkeesian told the Daily Dot that she and Smith were “working towards a quick and amicable solution to this dispute. In order to reach an amicable solution, we will not be making any further public comments at this time.“

Smith, however, has continued to comment. She updated her Twitter shortly after making her original Tumblr post to note that Sarkeesian had contacted her. But although she promised supporters she would update her Tumblr post “ASAP” to note that Sarkeesian was working with her towards a resolution, it took her nearly a full day to add the note. In the meantime, the post went viral, garnering thousands of notes on Tumblr, and landing on Reddit’s front page.

As of today, when she updated her Tumblr to announce that she’d been banned from Reddit, angry Redditors demanded to know not only why she’d been banned, but why the post about the ban, which had over 3,000 upvotes at press time, had been yanked from the Reddit front page. Reddit mods also apparently removed it from r/all and r/gaming, despite cries of censorship and obvious bias.

The move on the part of Reddit mods may have been to prevent yet more death threats and harassment from coming Sarkeesian’s way. Sarkeesian’s detractors have claimed numerous reasons for their hatred, including criticizing her videos as shallow and uneducated looks at the games she criticizes. Some have even tried to fake evidence that she’s a con artist. She also came under fire previously for using footage of other YouTubers‘ “Let’s Play” videos in her own series. (She claimed the right of Fair Use then as well.)

On Twitter, Smith seemed alarmed at the personal attacks coming Sarkeesian’s way, but given Sarkeesian’s very public history of receiving harassment, she shouldn’t have been.

This time, though, Redditors seem angrier at the Reddit mods than the Internet.

It appears that some of @femfreq fan base on Reddit are now doing their own cyber bullying. Bunch of hypocrites https://t.co/DSNfqhlqoN

In the meantime, Smith has provided the Internet a valuable lesson on copyright and basic etiquette in the age of the Internet:

When in doubt, always ask permission.

Disclosure: this reporter made monthly donations to Anita Sarkeesian’s Feminist Frequency website between 2011 and 2013.

Illustration via Tropes vs Women, remix by Aja Romano