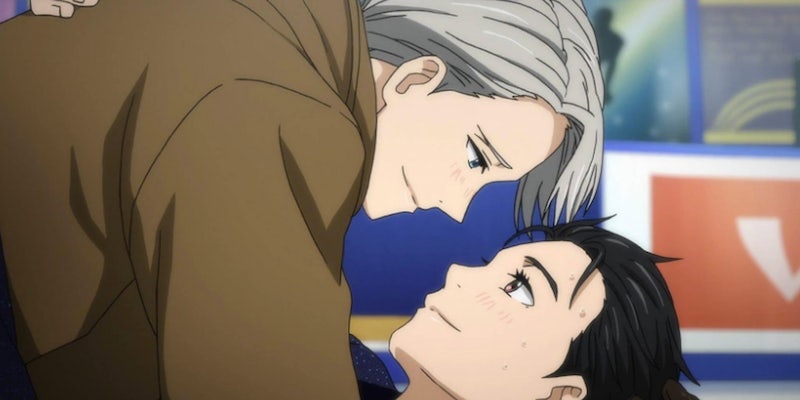 10 anime to watch if you loved ‘Yuri on Ice’

We've got the remedy for your 'Yuri on Ice' withdrawal.

The word is out: Yuri On Ice was officially crowned Crunchyroll’s Anime of the Year at the Anime Awards. The show’s combination of thoughtful character drama, thrilling performance sequences, and goofy comedy made it a deserved breakout hit. Will there be more? Maybe, but it won’t be for a long time yet. So what can all of us do to occupy ourselves in the meantime? Watch more anime, of course!

Yuri On Ice was a unique show, but if you loved something about its specific blend of strengths, there are almost certainly more shows out there for you to enjoy. But recommendations are never a one-size-fits-all sort of thing, so I’ll be tackling this one piece at a time.

What specifically about Yuri On Ice spoke to you? What sort of show could see yourself enjoying, even if it doesn’t have precisely everything Yuri On Ice? Well, let’s start with the easy ones.

First off, if you loved Yuri On Ice, you probably owe it to yourself to check out some of director Sayo Yamamoto’s other work. Yamamoto has been renowned as a distinctive directorial voice in anime for years now, having even worked as an episode director on esteemed projects like Samurai Champloo and Space Dandy. Her own works exemplify the forward-thinking perspective that made Yuri on Ice so unique, and so my list of recommendations will start right there. 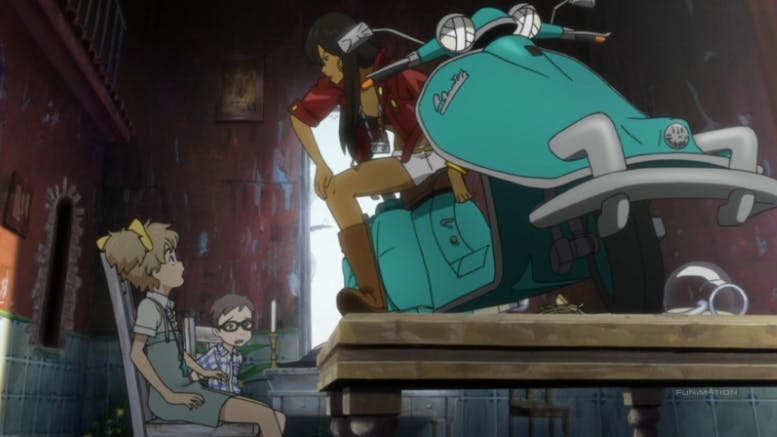 Michiko & Hatchin is a rambling road trip starring a lawless woman and her orphan companion, who seek their destinies in a country three steps removed from our own Brazil. If you like Shinichiro Watanabe’s style of episodic adventures (Champloo, Cowboy Bebop), but feel they could probably use a badass heroine topping the bill, it’s very worth a look. Yamamoto herself has described this one as a show she hoped women could come home to after a day of work, cracking a beer and enjoying the show.

2) The Woman Called Fujiko Mine 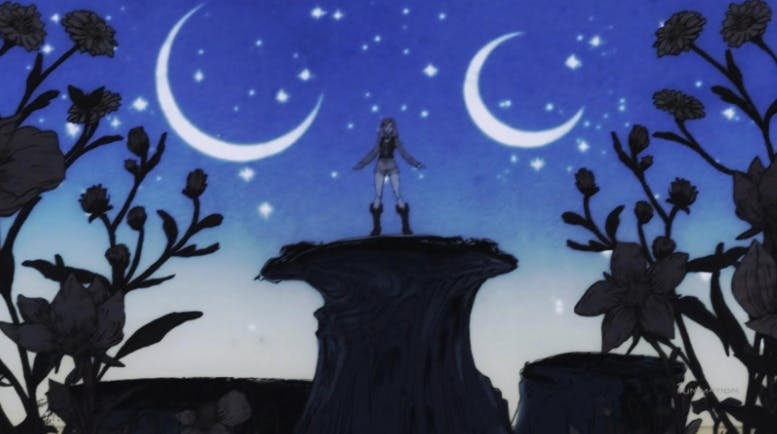 Four years after directing Michiko & Hatchin, Yamamoto returned with The Woman Called Fujiko Mine. Though this show takes place in the general Lupin III, master thief universe, it’s both relatively self-contained and very unique in its focus. As the title says, this show turns its eye to Lupin’s eternal femme fatale Fujiko, who is given her own rich story in Yamamoto’s capable hands. Couple that with the show’s gorgeous art design, and you’ve got another series that’s definitely worth checking out.

Before I move on from Yamamoto, I should mention that her highlights aren’t just limited to the full series she’s directed. Yamamoto preceded Yuri On Ice with the clear stylistic predecessor Endless Night, a beautiful skating-focused short from the Animator Expo program. She’s also renowned for her work on show-ending songs, having directed the endings for shows like Attack on Titan, Space Dandy, and Rage of Bahamut: Genesis. Yuri On Ice’s tight schedule and breakneck pacing didn’t even necessarily allow all of Yamamoto’s strengths to shine, so I’d definitely give her other work a chance.

But of course, shows are more than just their creators. While Yamamoto has directed some very exciting productions, if you’re looking for something that feels like Yuri On Ice, you might have to look elsewhere. The thrill of competition, the camaraderie of a broad cast, the fundamental optimism of pushing beyond yourself to succeed—all of those things are fundamental to sports dramas like Yuri On Ice. And fortunately, Yuri On Ice actually hits us during something of a sports anime renaissance, where we have a wide variety of recent sports hits to choose from. As far as those go, check out the next recommendations (in no particular order).

Starting off our sports roundup, Haikyuu offers a satisfying and reasonably grounded take on high school volleyball. Featuring some terrific animation and a wide, likable cast, it just recently finished up its third season. It’s light, fun, and brimming with energy. Even if Yuri On Ice made you fall in love with figure skating, you might want to leave a little time in your schedule for volleyball after this one.

Cross Game sadly isn’t available streaming, but is still widely available in manga form. As a personal fan, I had to include this one in my list: A story about grief, family, and the competitions that bring us together, it’s one of my absolute favorite manga. Focusing on a pitching prodigy and the team that rises around him, Cross Game offers a more sensitive and character-focused approach to sports stories, following its cast as they grow from children into young adults 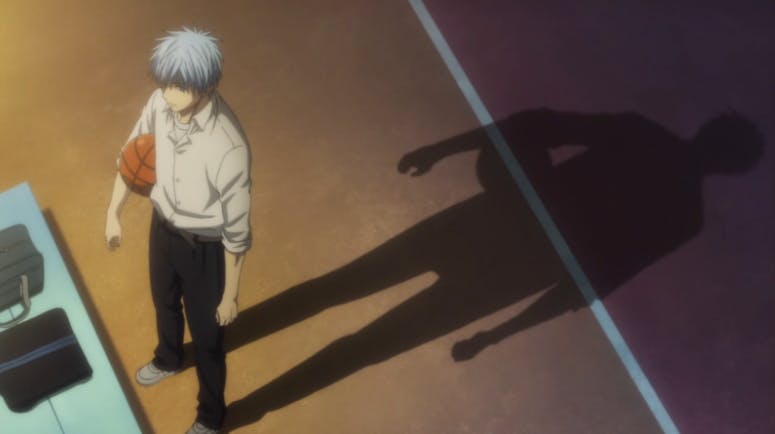 At the more sports-as-superpowers end of the genre, there’s the intense and often beautifully directed Kuroko’s Basketball. There are no overt romantic relationships in this one, but Kuroko’s Basketball is still deeply invested in the internal worlds of its characters, and the relationships that form between them. Plus, who doesn’t like shows about characters with basketball teleportation magic? 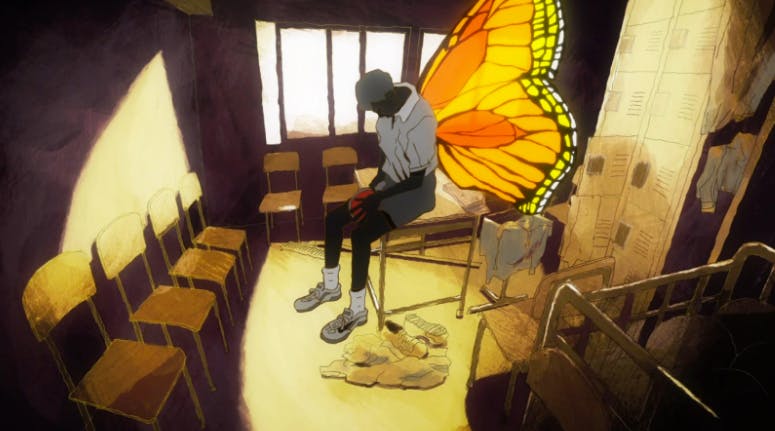 Finally, the tremendous Ping Pong the Animation brings a unique visual sensibility and terrific character writing together to offer one of the strongest shows in any genre. Starring a dynamic cast of young talents, it both celebrates what makes them unique and also examines the fundamental nature of competition. Every competitor has their own style and reasons for playing, and Ping Pong brings all of its heroes to life.

I’d frankly be negligent in my duties if I moved on from sports shows without mentioning Free. Free is actually a less dedicated sports drama than those picks above, and more of a slice of life/drama blend, but it’s still funny and beautifully animated and full of cute boys. Definitely worth a look if you’re seeking something a little lighter.

Of course, Yuri on Ice wasn’t just a thrilling sports show—it was also a mature and satisfying romance, a queer drama with a very thoughtful approach to its cast. If you’re looking for more shows like that, I’ve got a few picks that are just the thing! 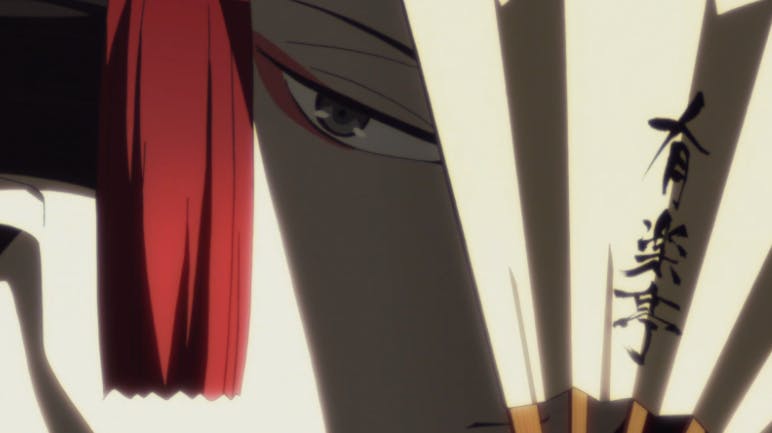 Focusing on a few artists practicing Japanese theater across the 20th century, Rakugo presents a striking story of passion, legacy, and awakening to your own sexuality. Performers find identity and redemption on the stage, all while weathering a Shakespearian hurricane of tragedy and personal sacrifice. It’s sensitively written and beautifully directed, and its second season is airing right now.

Wandering Son tends to show up on any list of LGBT-focused anime, and for good reason. The show is a beautifully intimate story of two adolescents coming to terms with their gender identities. Featuring another great ensemble cast and a warm, almost watercolor-styled visual aesthetic, it’s a sensitive and often heartwarming production. Wandering Son embraces the complexity and validity of our sometimes contradictory feelings, celebrating the value of every member of its charming cast.

If you know Kunihiko Ikuhara, this one’s probably not surprising: He directed the standout adolescent drama Revolutionary Girl Utena, and all of his works are rich in visual metaphor and social commentary. His latest show is actually his most direct, though that doesn’t make it any less exciting. Yurikuma Arashi tackles the realities of same-sex oppression, portraying not just the difficulty of being yourself in a hostile society, but also the various ways we all become servants of such systems. And it does this all through the wonderful framing device of… predatory lesbian bears.

Beyond ice skating champions and lesbian bears, there are all sorts of things to draw from the Yuri on Ice phenomenon. After all, this was a show that hit not only in Japan, but internationally, inspiring attention from real-life ice skaters and the mainstream geek media alike. And it is the big shows like this that help keep anime going by re-energizing core otaku and bringing in new fans in to see what all this anime fuss is about (don’t forget about that Crunchyroll free trial offer, naturally).