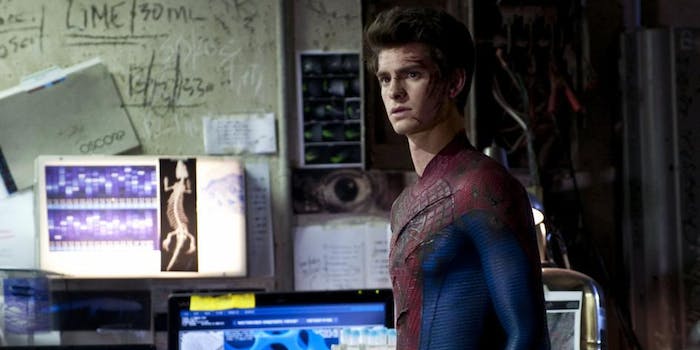 It's tough to make movies that everyone will love.

Andrew Garfield is being surprisingly candid about his experience starring in the Spider-Man franchise.

Garfield’s performance as Peter Parker was well-received, but The Amazing Spider-Man movies never really measured up to other contemporary superhero franchises. Judging by some of his recent interviews, Garfield has a realistic (if somewhat grim) attitude about the complicated process of working on such a high-profile project.

“I was never Spider-Man,” he said in an interview with Zaki Hasan. “I was the actor that I am. The person that I am. Struggling with trying to match up with something that I’d elevated so high in my mind. Elevated beyond what I could attain, what I could achieve.”

Speaking to Indiewire a few days later, Garfield discussed the impossibility of catering to such a broad audience.

“You end up pleasing no one, or everyone just a little bit. Like, ‘Eh, that was good.’ [The films are] mass-marketed, like ‘We want 50-year-old white men to love it, gay teenagers to love it, bigot homophobes in Middle America to love it, 11-year-old girls to love it.’ That’s canning Coke.”

Many critics and fans share this sentiment, but it’s rare to hear it expressed by the star of the movie in question. Garfield likely would have been more diplomatic if he were still contracted to play Parker in future Spider-Man movies, but that role is no longer his.

In the Indiewire interview, Garfield compared the creative atmosphere on the franchise to “a prison” because of the intense expectations projected onto the cast and crew.

While studio publicists try to quash these kinds of revelations during long, stressful promotional tours, Garfield isn’t the first superhero franchise star to express discomfort with the pressures of the job. Hopefully the new Spider-Man, 19-year-old Tom Holland, is ready for what will probably be a much longer stay in the role.