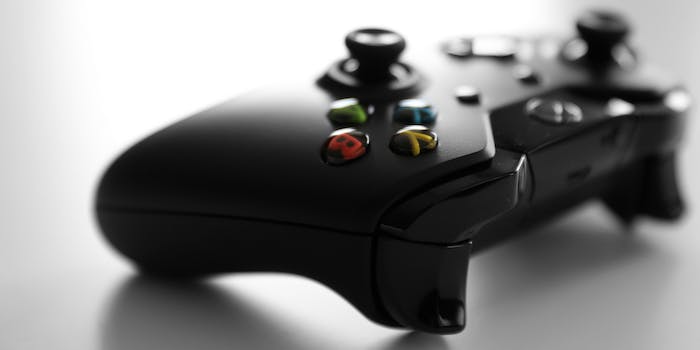 Newsweek analyzes Gamergate hashtag to prove it really is about harassment

In a shocking twist, it actually isn't about ethics in journalism.

The last three months have seen women being doxed, harassed, and driven from their homes due to death threats, rape threats, and even mass shooting threats related to Gamergate—the geek culture war that has spawned worldwide controversy throughout the Internet. All the while, its proponents have insisted that the “movement,” as they call it, is not actually about gaming culture’s rampant misogyny, but about what they dub “ethics in journalism.” This claim has been widely and repeatedly debunked, but it hasn’t stopped gamers behind the hashtag from insisting that everyone else is wrong.

But now, a detailed analysis of the #Gamergate hashtag by Newsweek has added considerable force to the argument that Gamergate is, and always has been, about harassment.

Gamergate proponents like to argue that Gamergate is the boiling over of industry tensions between gamers and reviewers. While that may be a factor in the anger many gamers feel, Gamergate actually began with a specific act—a blog post made about feminist game developer Zoe Quinn by her ex-boyfriend, accusing her of cheating on him with multiple people including a member of the gaming media. Gamers angry about Quinn’s treatment of her ex latched on to the idea that Quinn had traded sexual favors for positive reviews and career advancement.

This accusation was refuted by all parties and easily proven to be false. But a bigger idea had already taken hold: the connection between what these gamers felt was the intrusion of feminism into gaming culture, and the increasing attention of gaming journalism to progressive ethics and priorities. When gamers realized that two more journalists, one from Kotaku and one from Polygon, had personal ties to the game developers they had written about, the controversy expanded into what we now know as #Gamergate.

The claim that “actually,” Gamergate was “about ethics in gaming journalism” became the hashtag’s universal mantra, as well as a meme for its detractors to make fun of. All the while, very tangible harassment accompanied the hashtag, particularly directed at prominent feminists in the gaming community like Anita Sarkeesian, Brianna Wu, and their supporters. Many of Gamergate’s proponents insisted that the harassment and threats were being done by people on the fringe of the movement or by trolls attempting to make the movement look bad to the outside world.

But Newsweek‘s analysis of the hashtag proves that Gamergate’s modus operandi has been harassment. The outlet hired a social media analysis company to analyze around 500,000 tweets using the #Gamergate hashtag—only a quarter of the more than 2 million tweets the hashtag has generated thus far.

The goal was to determine “how often Twitter users tweeted at or about the major players in the debate, and whether those tweets were positive, negative or neutral.” Specifically, the company, Brandwatch, looked at the most prominent feminist gaming critics targeted by Gamergate, along with the most prominent journalists being accused of breaches in ethical conduct.

The results were decisive: female critics in the industry received more harassment and targeted attention, on orders of magnitude, than the journalists the gaming movement claimed to be reacting to. 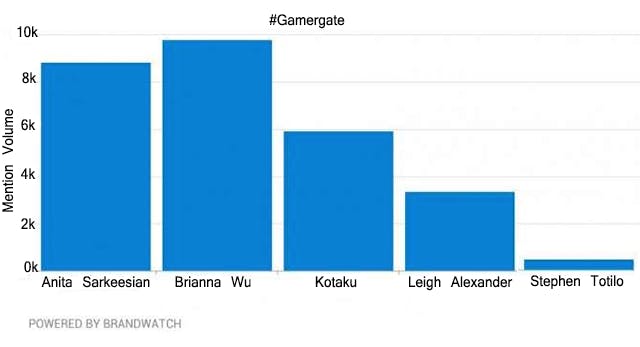 A comparison between Zoe Quinn and the Kotaku reporter she was falsely alleged to have slept with showed a huge amount of attention directed at Quinn—to the tune of more than 10,000 tweets among the fraction analyzed by the company. Nathan Grayson, the Kotaku reporter, received less than a tenth that amount—only 742 tweets total. 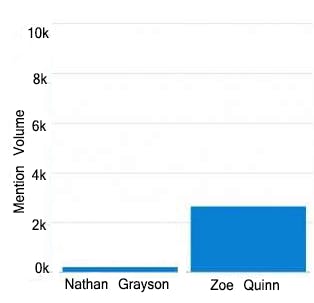 Images modified from Brandwatch via Newsweek

And while the vast majority of the tweets about Gamergate were neutral, overall, more tweets were negative than positive—and most of those negative tweets were directed at Wu, Sarkeesian, and Quinn, respectively.

In fact, not only did the female gaming critics and game developers in the analysis receive more negative tweets overall than either Kotaku or its two male journalists, they received more tweets directed specifically at them than any gaming journalist on the list.

The easy conclusion here is that Gamergate is not about ethics in journalism, but rather about expressing anger towards the presence of feminists in the gaming community. For instance, female journalist Leigh Alexander wrote a controversial article at gaming site Gamasutra about the demise of “gamer” culture. It led to a backlash from Gamergate proponents and a successful push for Intel to remove advertising from Gamasutra.

But even Alexander, who represents the new, progressive ethical mode in games journalism that Gamergate claims to hate, didn’t receive as many tweets, or as many negative tweets, as Brianna Wu or Anita Sarkeesian. Wu is a game developer; Sarkeesian is a pop culture critic with her own website and YouTube channel. Neither write for gaming websites or constitute part of gaming media, but they both represent women with progressive ideals working to participate within and critique an industry that is deeply regressive.

Though Gamergate has been prematurely declared dead numerous times over, it always seems to keep rearing its ugly head, most recently over the successful push to get Adobe and other advertisers to pull their ads from Gawker over its journalists’ openly anti-Gamergate stances. As Newsweek‘s Taylor Wofford notes, “[C]ontrary to its stated goal, GamerGate spends more time tweeting negatively at game developers than at game journalists—a fact Intel, Mercedes, and Adobe should have researched before they pulled ads from news sites.”

Perhaps this new research will finally be the nail on Gamergate’s coffin—the data that shows decisively that Gamergate is and has always been about suppressing new voices in the gaming community.

The sooner we can move on, the sooner those voices can get back to doing what they were doing before Gamergate’s season-long derailment: Changing the gaming community for the better.