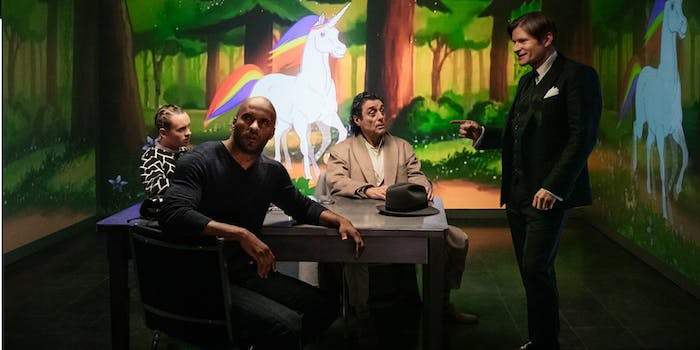 Gillian Anderson's David Bowie impression is awesome, but it's still hard to get invested in the war.

After introducing various gods who are either thriving or struggling in America, episode 5 opens with one forgotten long ago.

In prehistoric times, the mammoth god Nunyunnini arrived in America with a tribe of his followers from across the ice in Siberia. Told through stylized animation instead of live-action characters, it’s a simpler story than the “Coming To America” sequences for characters like Anansi. Faced with a new way of life, Nunyunnini’s followers abandon him to rot the forest. It’s a cautionary tale for the Old Gods, now threatened with obsolescence.

The rest of the episode belongs firmly in the present day, reuniting Laura and Shadow after Laura’s wonderfully depressing reintroduction last week. Now we know the truth about Laura’s sad and cynical life, their relationship seems a lot more interesting. Determined to win Shadow back, it’s still unclear if Laura truly loves him as much as she claims. He represents Laura’s route to escape her undead afterlife, mirroring Shadow’s idealized dreams of Laura when he was in jail.

Emily Browning is fast becoming one of my favorite actors in American Gods. Episode 4 revealed Laura to be a potty-mouthed asshole, and in this scene she attempts a charm offensive on her husband. She behaves like someone who consciously uses cuteness to her own advantage, but this time it doesn’t work. Shadow finally has the upper hand in their relationship, and you suddenly realize how insecure Laura is without Shadow’s puppy-like loyalty to support her.

Interrogated by a pair of police detectives, it soon becomes clear that their arrest was a ruse. We’re in for our first showdown between Mr. Wednesday and the New Gods.

Media (Gillian Anderson) is emblematic of American Gods’ most obvious strengths and weaknesses. Dressed as Ziggy Stardust and later as Marilyn Monroe, she’s memorably stylish and fun to watch. Brian Reitzell’s Bowie pastiche music is fantastic, and you can’t help but enjoy Anderson’s celebrity impressions, combining familiar tics with Media’s own unnerving energy. But at the same time, it’s hard to care about her actual role as a villain. For me, the war between the New and Old Gods is still much less compelling than the individual stories for characters like Salim, Anansi, and Anubis.

Trapped in the interrogation room, Shadow and Mr. Wednesday meet the New Gods as an unlikely family unit: Media as the mom, Mr. World (Crispin Glover) as the dad, and the Tech Boy as their bratty teen son. Mr. World makes the Tech Boy apologize for lynching Shadow (a scene that I still feel was kind of mishandled), and offers Wednesday a deal: Instead of fighting the New Gods, he can join them by being “franchised” and rebooted as the god of the Odin missile.

The New Gods display far more tangible power than Wednesday, but in the end, you know that deal isn’t going to work out. If the New Gods were truly that powerful, they wouldn’t bother to offer a deal in the first place.

In the midst of this power struggle, Shadow has a rather disappointing role. Despite this being a fairly Shadow-centric episode, he spends most of it flailing around in confusion. His reactions make sense—who wouldn’t be freaked out by their wife returning from the dead, or a woman levitating across the room?—but they don’t fit with the rest of the show. Everyone else just takes supernatural events in stride.

Shadow was introspective and laid-back in the book, a thoughtful man who was often judged by his size and appearance. By giving him a more talkative, active role, the show helps him keep up with loquacious characters like Mr. Wednesday. It also makes him into a rather one-note protagonist. Instead of hearing Shadow’s internal viewpoint, we just get Ricky Whittle repeatedly demanding answers that Mr. Wednesday refuses to give.

Out of all the human characters in the show, Shadow has the most realistic reaction to his bizarre circumstances. But does this propel the story in an interesting way? Not really. Without a clear goal of his own, Shadow’s main driving force is a desire to understand what’s happening. The problem is, when he finally acknowledges the reality of the Old Gods, it can’t possibly be a satisfying emotional payoff. The audience already accepted that reality in episode 1.

The New Gods were the real stars this week, so for once, we don’t need a lesson in ancient history. These characters were born in the 20th century—or in the case of the Technical Boy, maybe the 21st.

While the show updated the Tech Boy from an overweight hacker to a vaping teen with an aura of 4chan cynicism, Mr. World actually matured into his role. As a villain, he makes more sense now than he did when the book was published in 2001. He’s the ultimate Man In A Suit, representing the inescapable nature of capitalist, corporate power.

The original Mr. World was an enigmatic villain borne of megacorporations like McDonalds, but the 2017 version exists in a climate of worldwide phishing attacks, Facebook-influenced elections, and Pepsi pretending to be woke. It’s depressingly easy to buy into the Illuminati idea of an invisible, evil god who manipulates the world through surveillance and secret corporate buyouts.

Now that we’ve met all three of the main New Gods, we have a better idea of how their power works. They’re thriving compared to someone like Mad Sweeney, but they feed on a different kind of belief. They’re more like a business, and they market themselves as such. Where the Old Gods were elemental forces of life, death, and unexplainable magic, the New Gods represent forces that humans created themselves. And while humans have become obsessed with media and technology, those ideas don’t hold the same emotional weight as good old-fashioned religion.