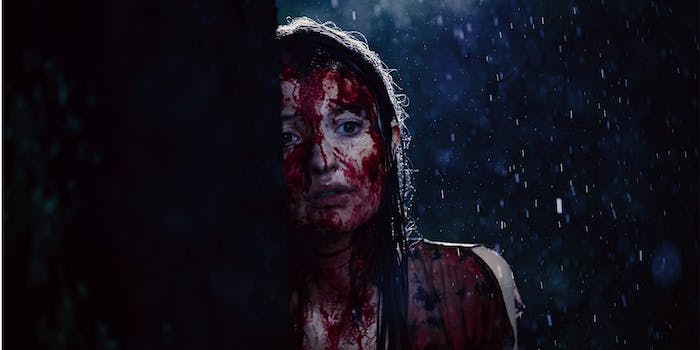 In the book, she barely had a personality. The show dedicates an entire episode to her, and it's the best so far.

Until this week, we only saw Laura Moon from her husband Shadow’s perspective. An idealized beauty, languishing in bed while she waits for Shadow to come home. But when meet Laura on her own terms, she’s miserable, nihilistic, and flawed. At one point she vomits embalming fluid from every orifice while her best friend calls her a “zombie whore.”

Laura was embarrassingly two-dimensional in the book, dying so Shadow could have emotional depth while embarking on his macho roadtrip with Mr. Wednesday. Even her job was tailored to Shadow’s story: a travel agent who books him a plane ticket home from jail. This episode finally turns her into an actual person, subverting the fridged girlfriend trope and explaining why she cheated on Shadow while he was in jail.

The show draws the only conclusion that makes sense: Shadow and Laura’s marriage just wasn’t very happy. Shadow loves his wife deeply, but has a shallow understanding of her inner self. His memories are rose-tinted, barely recognizable as the cynical woman we meet in this episode. And as Laura’s friend Audrey points out, Laura treats Shadow more like a pet than a husband.

Their relationship is a mess right from the start when Shadow tries to rob the casino where Laura works. She warns him about getting caught, and he waits for her in the parking lot—a scenario that would send most women running. But Laura isn’t particularly concerned for her own safety, and brings him home for a bout of doggy-style sex on the couch. It’s a stark contrast with the intimacy of Salim and the Jinn’s sex scene last week.

This sets the tone for their relationship. When they’re flirting outside the casino, Shadow tells Laura she looks like “someone who could get anything she wanted, just by asking.” It’s a throwaway pickup line, but it also illustrates how little he understands her. From Laura’s perspective, she never gets what she wants. Her good looks didn’t save her from her dead-end job, or stop her from huffing bug poison under the hood of her hot tub. Meanwhile, Shadow is a guy with simple needs. If he has Laura, he’s happy. He would give Laura anything she asked for, failing to realize this isn’t enough.

As the episode fast-forwards through their marriage, Shadow and Laura manage to be unlikable yet deeply sympathetic. Shadow is an immature doofus who fails to notice that his wife is unhappy, while Laura finds a pragmatic yet unfair solution to their relationship problems: Shadow should rob the casino. Shadow gets caught and insists on taking a longer sentence so Laura can stay out of prison, and Laura ends up sleeping with Shadow’s douchey best friend (a perfectly cast Dane Cook.) Then: splat.

Laura’s death reintroduces the show’s religious themes, suggesting that non-belief is a kind of belief in itself. Laura says that when you die, “you rot,” so that’s what happens to her. Faced with spending eternity in a silent void, she tells Anubis (the Egyptian god of death) to fuck off. But when Shadow accidentally brings her back to life, her resurrection comes with an ironic twist. Her soul returns to a decaying corpse, fulfilling her original belief in what happens after death.

American Gods displays an interesting attitude to Laura’s body, especially in the context of her role as a Beautiful Dead Wife. Like every leading woman on TV, Emily Browning is pretty. But unlike most shows, American Gods acknowledges this, instead of neutrally depicting her as an average-looking woman. At the same time, Laura herself just doesn’t care. She doesn’t use makeup, and wears slouchy, low-maintenance clothes. She looks gorgeous and perfectly coiffed in Shadow’s dreams, but when she’s depressed and alone, she’s realistically unkempt.

At a press event covered by fellow Daily Dot staff writer Michelle Jaworski, showrunner Bryan Fuller said Emily Browning saw Laura as a role model for young women to “not give a shit.” Fuller didn’t think of her that way before, but thanks to Browning’s input, that’s how Laura turned out. (Incidentally, Fuller really should’ve known better. He wrote sympathetic undead girls into three of his previous shows: Pushing Daisies, Hannibal, and Dead Like Me.)

Laura isn’t aspirational, but it’s weirdly refreshing to see such a messy female character in a male-dominated show. According to Fuller, Browning decided not to shave her underarms because “that’s a thing girls do to please men,” creating an interesting contrast between Laura and Shadow during their first sex scene. (Ricky Whittle, a former model, shaves his.) It’s a minor detail, yet practically unheard-of on TV. Good luck finding any female body hair in the gritty historical world of Game of Thrones.

Laura experiences the privilege of being a conventionally attractive white woman, disguising the ugliness inside. She also reminds us that in the end, everyone is just a rotting sack of flesh. Decay is a recurring theme in her story, as flies buzz around her house and later her body. The only time we see Laura make an effort with her appearance is when two funeral directors disguise her undead pallor with a layer of spray-tan.

Shadow isn’t entirely to blame for his idealized image of Laura, because she never lets him see her at her worst. He doesn’t know about the bug spray, and he was shocked when she told him she wasn’t happy in their marriage. It’s no coincidence that when she comes back from the dead, she flees to the house of her friend Audrey (Betty Gilpin) instead of following Shadow. The two women share the funniest scene in the show so far, Audrey screaming in horror while Laura shits out a stream of embalming fluid. She exposes herself to Audrey in a way that just doesn’t happen with Shadow. And despite the distasteful nature of their situation—Laura fucked Audrey’s husband, died, and then came back as a smelly zombie—Audrey helps to reassemble Laura’s body so she can look pretty when she apologizes to Shadow.

This week’s main gods were Anubis (Chris Obi) and Thoth (Demore Barnes), introduced in their human guise as a pair of funeral directors, Mr. Jacquel and Mr. Ibis. Thoth was the Egyptian god of scribes and wisdom, inspiring Neil Gaiman to characterize him as a professorial type. The show expands this role into a narrator of the Old Gods’ stories, keeping a historical record of their arrival in America.

Anubis and Thoth are a rather dubious example of American Gods‘ central idea, that immigrants brought the Old Gods to America. Based on the discovery of tobacco and cocaine in Egyptian mummies, some historians theorize that ancient Egyptians traded with the Americas. But so far, it’s not actually been proven. Fortunately, historical accuracy is irrelevant to a surreal fantasy show like American Gods. The story only has to follow its own internal rules.

Although people stopped believing in Anubis and Thoth about 1,500 years ago, this episode provides a clever explanation for their survival. Ancient Egyptian stories and imagery have been absorbed into American culture, reintroduced through mummy movies, fantasy shows like Stargate, and Egyptian-inspired design. Laura spent years working in an Egypt-themed casino with costumed waitresses and glitzy Anubis playing cards, so when she died with no religious beliefs of her own, she arrived the Duat. And there, Anubis was waiting with all the dignity of his former greatness.