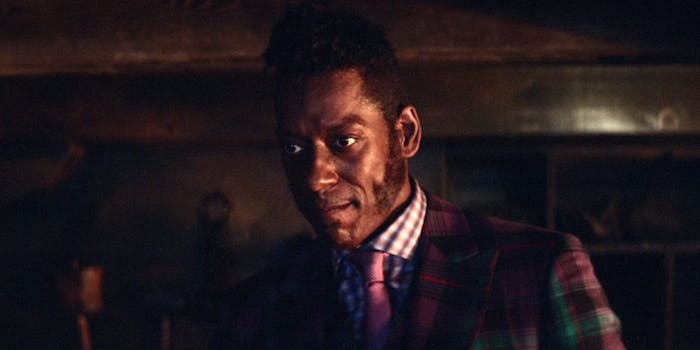 Nothing will prepare you for this incredible monologue.

Warning: This article contains spoilers from the latest episode of American Gods.

Anansi sure knows how to make an entrance.

The second of American Gods, “The Secret of Spoons,” kicks off with one of the most memorable character introductions in ages. It’s one of the show’s “coming to America” vignettes, set aboard a Dutch slave ship on the Atlantic Ocean in 1697, and it highlights that not everyone who arrived in America with their gods came of their own free will. A man named Okoye, shackled and scared, called out to Anansi for help and offered gifts if his prayers were answered.

Anansi, the West African trickster god who sometimes takes the form of a colorful spider, responded to those calls. Dressed in an impeccable purple plaid suit, Mr. Nancy laid out the situation for the men on the ship.

NO ONE WAS READY FOR @TheOrlandoJones’s SPIDER JELLY – AFTER TAKE ONE OF MR. NANCY’s MONOLOGUE, HE GOT A STANDING OVATION FROM CAST AND CREW pic.twitter.com/s43xsWyDd1

“Let me tell you a story,” Anansi started softly. “Once upon a time, a man got fucked. Now how’s that for a story? ‘Cause that’s the story of black people in America!”

For the next few minutes, the men on the ship (and some of the audience at home) are given a rude awakening. It’s a blunt and candid summation of what black people in America have waiting for them after reaching those shores for the next few hundred years. Although the men on that ship might have no idea what Anansi means when he tells them what will happen, the audience knows exactly what he’s talking about.

Anansi is an expert storyteller, and in the hands of Orlando Jones—who grew up hearing stories of Anansi long before he read American Gods—he’s absolutely captivating. He can enthrall and spin webs, rile up those who listen, or calm them down if he needed to. (In this case, he pulls absolutely zero punches.)

“I was blown away,” Jones told reporters last month during an American Gods press junket. “I joked when I first read it, I was like, ‘Man I didn’t know these guys [showrunners Bryan Fuller and Michael Green] were Black Panthers.’”

“It’s a brutally honest accounting of obviously the historical elements that come to play,” Jones continued. “It’s in the same way that I think we’re responding to all of our dialogue as the characters in that way that there’s a core resonating through it that we recognize as completely truthful, and you’re almost like, ‘Are they gonna let us say this?’”

They do that and more as Anansi convinces the men on the ship to kill all of the “Dutch motherfuckers” and burn down the ship, which will certainly kill them in the process. And Anansi has a message for them, one that might end up resonating with audiences after the show.