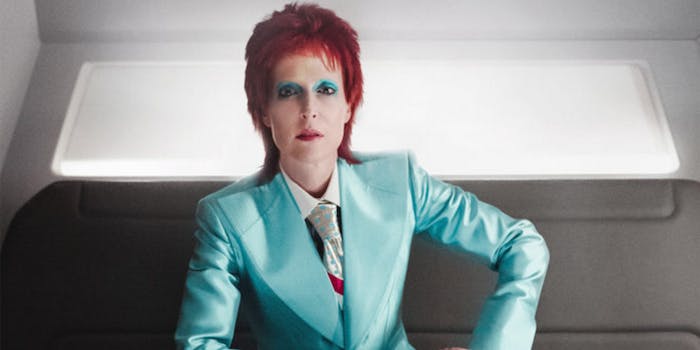 ‘You have an image problem.’

Media, the New God brought to life by Gillian Anderson, made quite the impression in her first appearance in American Gods, but now she’s got a brand new image.

Ahead of American Gods’ upcoming episode, “Lemon Scented You,” Starz released a clip and photograph of Media temporarily embodying David Bowie, complete with Bowie’s pale blue suit and hair from his “Life on Mars?” music video.

Per Starz, “Gillian Anderson stars as the New God Media in the critically acclaimed series American Gods. Media assumes whatever form will deliver her message most effectively and is often personified by iconic celebrities.”

According to co-showrunner Bryan Fuller, the TV version of Media is a combination of media and fame, so whenever Media manifests onto the scene, it’s often as a celebrity you’ll recognize. We already saw her take over as Lucy Ricardo on a TV set before Shadow Moon’s eyes (a scene that happens similarly in Neil Gaiman’s book), and we’ll see even more later in the season when she channels Marilyn Monroe and Judy Garland. 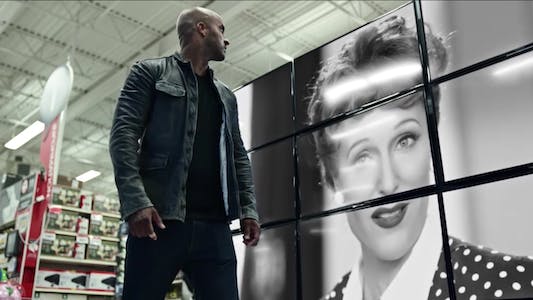 It’s all a calculating move for Media. When she’s talking to Shadow, she commands the scene with an iconic character. Having a television set talk to you is memorable on its own, but Media’s choice of Lucy will stick with Shadow long after she’s gone. Generations of people grew up with Lucy, so seeing her be so calculating and crude—even if it’s not really Lucy—is its own kind of shocking.

We see it here in the newly released scene from American Gods’ fifth episode, which will air in full on Sunday. In Bowie’s form, Media appears in Technical Boy’s (Bruce Langley) limo and has a message for him: He needs to change his image and apologize.

For Tech Boy, the New God whose image changes every time we see him because he’s evolving and changing faster than trends do, he’s pitted against Bowie, a timeless trendsetter who was ahead of his time. And Tech Boy is clearly out of his depth.