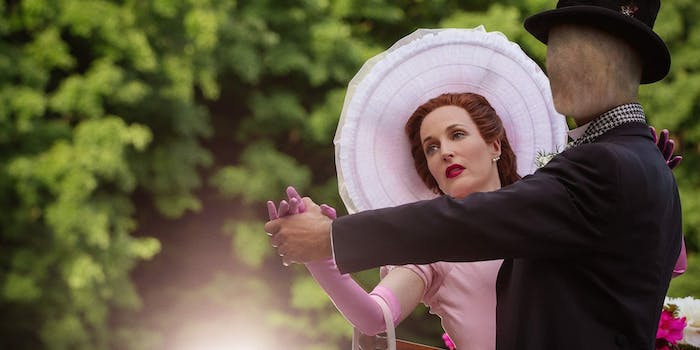 Recap: The ‘American Gods’ finale unleashes the power of Easter

Introducing Easter as a new power-player for the Old Gods, the finale sets the scene for season 2.

Over the course of American Gods‘ first season, I’ve been struck by two conflicting reactions. It’s an impressively detailed and ambitious adaptation, deepening the religious and political themes of Gaiman’s novel, and correcting some of the clumsier elements. I could happily spend hours analyzing the visual design, mythological references, and characterization choices for the gods. But at the same time, it lacks the emotional and narrative drive of the showrunners’ previous work.

This week, both of those elements were out in full force. And due to some behind-the-scenes difficulties, it wasn’t a wholly satisfying finale.

Season 1 was originally meant to be 10 episodes long. The book ends its first act with the “House on the Rock” scene, where the Old Gods meet to discuss the upcoming war. It’s an obvious place to conclude the season, but the finale fell short because they only had the resources for eight episodes. Speaking to TV Line, co-showrunner Bryan Fuller explained that while filming the third and fourth episodes, they realized something was wrong. “There were issues with the sets. There were some things that happened too early in Shadow’s journey that changed the perspective of the story.”

They solved this problem by cutting two episode together to make episode 3, which turned out pretty well. But in order to keep later episodes to the same standard, they had to abandon their original plans for the finale. Instead of finishing at the House on the Rock, they inserted a new climax where the New Gods confront Mr. Wednesday at the home of Easter (Kristen Chenoweth).

Our two unlikely roadtrip squads arrive at Easter’s house for different reasons. Mad Sweeney thinks Easter can bring Laura back to life, so they drive to her house in their stolen ice cream truck. Meanwhile Mr. Wednesday wants to recruit Easter to be his “queen,” inspired by this week’s Coming To America story.

Like the other Old Gods, Bilquis‘ story follows an epic rise and fall. Beginning her life as a goddess who flourished in an orgy of sexual energy, her power waned as men began to suppress women’s power and desires. (Somewhat ironically, this whole sequences is narrated by Anansi, while Bilquis remains an almost wordless presence.) After being ejected from an underground disco in 1970s Tehran (with a striking soundtrack by Debbie Harry and Shirley Manson), she flees to the U.S., where she is gradually degraded to the point of homelessness. It’s not explicitly specified in the show, but her arrival coincides with the AIDS crisis; a difficult time for a sex goddess. Starving for the worship she once took for granted, she eventually agrees to join the New Gods. The Tech Boy offers her a new identity with a dating app called Sheba, a nod to Bilquis’s original identity as the glamorous Queen of Sheba.

Most of us know someone who, during Christmas and Easter, smugly reminds you that Easter eggs and Christmas trees are actually pagan traditions. Kristen Chenoweth’s Ostara brings this idea to life, as the sprightly host of a luxurious Easter garden party. The guests include versions of Jesus, including Jeremy Davies as a mournful hippy Christ. Ostara seems like she’s flourishing, but Wednesday knows the truth: As an Old God, she now relies on America’s commercialized version of Christian Easter, rather than being worshipped in her own right as a goddess of springtime and renewal.

Chenoweth is the latest in a string of excellent casting choices, playing Ostara as a rich white lady who smiles charmingly in public, and then drags Mr. Wednesday behind closed doors to yell at him in private. She doesn’t want him upsetting the equilibrium of her arrangement with Christianity, but as always, Wednesday is a master of persuasion. Like all the Old Gods, Ostara is greedy and insecure, and agrees to join Wednesday in his revolution against the New Gods. But not before she has a very interesting conversation with Laura and Sweeney.

Last week, we learned that Sweeney was present at Laura’s death. When he and Laura meet up with Ostara, we hear the whole truth: Sweeney actually killed Laura on Mr. Wednesday’s orders, leaving Shadow vulnerable and bereft enough to join Wednesday on the road. Suddenly, there’s a whole new layer to Sweeney’s bitter attitude. He clearly isn’t happy with his role as Wednesday’s henchman, and now he’s having to spend time with his own victims.

Unfortunately, the nature of Laura’s death means Ostara can’t bring her back to life. Since she was killed by a god, she needs to set her sights on Wednesday himself. This sets up an interesting dynamic for season 2, with one caveat: Shadow has less agency than ever. He’s a very passive protagonist in both the book and the show, but as I’ve mentioned before, the book allows more insight into his interior life. In the show, it’s hard to see why he follows Mr. Wednesday at all. The finale emphasizes the passive nature of his role, as Laura gears up to confront Mr. Wednesday, and Sweeney gets more complex character development. All Shadow really does is follow Wednesday around.

The final showdown kicks off when the New Gods arrive, with Media dressed as Judy Garland in the movie Easter Parade. We’re treated to a fun scene where the Tech Boy’s faceless guards (now wearing party-appropriate top hats and tailcoats) dance in formation, as the gods’ argument reaches a fever pitch. Mr. Wednesday’s dialogue almost feels like poetry, rhythmically following the soundtrack in a possible reference to “flyting”—the ritual exchange of poetic insults in Norse literary tradition. However, the actual meaning behind this scene is a little thin. At long last, Mr. Wednesday reveals his true identity as Odin, which is framed as a massive turning point in Shadow’s story, but doesn’t actually… matter.

While Laura and Sweeney got a surprising amount of character development this season, Shadow’s journey focuses on one simple question: Does he believe in the Gods? He spends most of the time either in denial, or expressing anger and confusion at the supernatural events in his life.

We know from the snow episode that Shadow’s belief is more powerful than most, hinting at why Mr. Wednesday is so keen to keep him by his side. But when Shadow finally acknowledges his belief to Odin and Ostara, it doesn’t seem like a meaningful turning point compared to Laura discovering the truth about her death. It’s just a convenient conclusion to a rather weak story arc, allowing us to have a heroic showdown in the finale. The most interesting element of the confrontation is how it ends, with Ostara striking a symbolic blow against the New Gods.

The New Gods are depicted as behind-the-scenes power brokers, representing invisible forces in American culture. Media gets her power from the ubiquity of pop culture worship, whereas Ostara is a truly elemental figure. By creating a famine that spreads quickly across the countryside, she wants to remind humanity that Easter means more than chocolate eggs and bunny rabbits. If people want their crops back, they’ll need to start worshipping the goddess of springtime. It’s a bold and welcome addition to Gaiman’s story, where the Gods live secretly alongside humans, but we don’t really see their impact on a larger scale.

With Shadow’s initial arc now (kind of) concluded, we have three things to look out for next season. The most urgent is Laura telling Shadow about Wednesday’s interference. It’s difficult to predict how that will shake out, because while it should inspire Shadow to abandon Wednesday’s quest, we know they’ll probably end up together again. Meanwhile, Salim and Bilquis are on their way to the Old God convention at House on the Rock. Salim wants to find the Jinn, while Bilquis is secretly working for the New Gods.

There are so many festivals connecting springtime and renewal, it’s hard to pin Easter down to any one tradition. Christ’s resurrection story is suspiciously similar to some versions of the myth of Adonis, who rose from the grave and was celebrated in the springtime in Italy. The Golden Bough links Easter with the Greek resurrection deity Attis, and as Mr. Wednesday points out in this episode, many Easter traditions originate with European pagan customs for the goddess Eostre or Ostara. Easter bunnies come from Northern European folklore about hares and fertility, while Easter eggs represent a variety of things including Christ’s empty tomb, and more literal symbolism about birth and, well, food. (In the end, most religious festivals are an excuse for themed snacks.)

This makes Ostara one of the most far-reaching and malleable deities in the show. She’s gone through dozens of makeovers during her long life, and she’s savvy enough to jump onto the Christian bandwagon when she arrives in America. Judging by what Wednesday says in the finale, she also draws power from unintentional springtime rituals, in a similar vein to the New Gods relying on non-religious “worship.” According to Wednesday, everyone who gets laid at Spring Break is really participating in a gigantic springtime fertility ritual in Ostara’s honor.

Between them, Ostara and Mr. Wednesday represent two elemental extremes of the Old Gods. Wednesday is all about death, deception, and war, while Ostara is a goddess of sunlight, springtime, and fertility. It’s a smart strategic decision for Odin’s upcoming war, and sets the tone for more changes to the book in season 2.