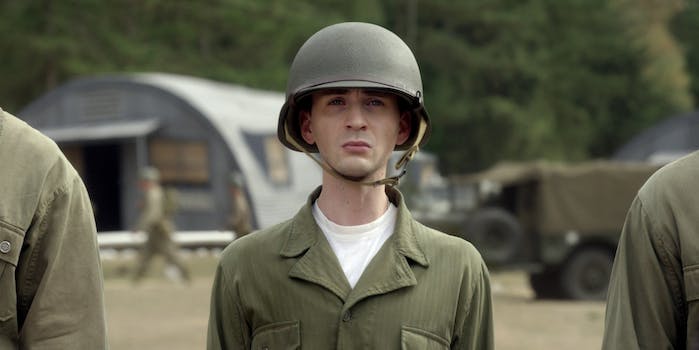 Inside the moody, introspective world of ‘American Captain’

On a superficial level, Captain America is a classic square-jawed superhero, a staunchly moral and patriotic wartime icon who slowly evolved into the Hollywoodized Chris Evans character we know from movies like The Avengers.

Frozen and then reawoken in the present day, in many ways Steve Rogers is one of the most tragic superheroes around: a man trying to find his way in an alien environment, where all his friends are dead or dying of old age. American Captain borrows the diary comic style of indie artists like Robert Crumb and Alison Bechdel to explore how he deals (or doesn’t deal) with adjusting to life in the 21st century.

Loosely following the characterization set up in The Avengers movie, American Captain feels extraordinarily prescient. It depicts Steve Rogers as a guy who often struggles to cope with everyday life, in part due to the lingering trauma of his experiences as a soldier in World War II. While the Marvel movies tend to focus on Captain America punching bad guys and saving the day, American Captain shows Steve Rogers arguing with Nick Fury over whether he should go to therapy, visiting art museums with Pepper Potts, and getting excited over how many oranges he can afford to buy in present-day New York.

The first Captain America movie set him up as a relatively cheesy, heroic figure, but the recent Captain America: The Winter Soldier often seemed to tell the story of a man on the brink. The Steve Rogers we see in American Captain feels so similar to this stoic version of the character that it’s almost surprising to realise that the webcomic began all the way back in 2012. 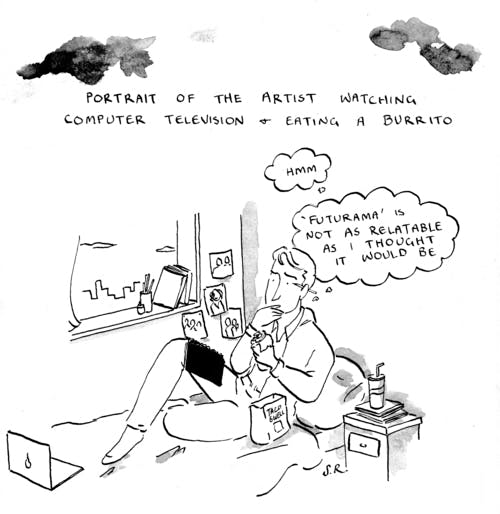 There’s an incredible amount of high-quality fanart and fiction coming out of Marvel fandom at the moment, but the thing that sets AmCap apart is the way it uses a medium that really shouldn’t fit in with such a bombastic superhero story, yet it somehow does.

Thanks to Steve Rogers’ backstory as an artist, it’s entirely plausible that he might keep a visual diary as a way to deal with the loneliness and confusion of life in the 21st century. This makes for a distinctly unglamorous interpretation of the superhero comic genre, told from the superhero’s own perspective.

After the release of Winter Soldier, AmCap creator Robyn Kenealy agreed to speak to the Daily Dot about how the webcomic developed from a late-night joke about ‘90s indie comics to one of the most interesting long-running works in the Marvel fan community.

I noticed you namecheck a few indie comic artists in your FAQ section on Tumblr. Could you give a little background on the inspiration for American Captain?

Steve is canonically a student of fine arts in the comics, before becoming Cap. In one arc he even works as a cartoonist, drawing Captain America comics for Marvel’s in-universe Marvel (that stuff is pretty adorable. He’s very, very happy about drawing his fighting style correctly, let me tell you!)

Meanwhile, I personally used to draw autobio comics in the “indie” style way back in the day. In fact, I used to draw pretty much the exact comic that Steve is drawing now, although obviously my life was less interesting than his is and it wasn’t called American Captain. So initially AmCap was just a straight-up meta joke: “lol what if Steve did indie comics like the ones I used to do?” It was exactly that flip, and it was also, if I recall correctly, approximately three in the morning. And I drink.

Anyway, I pitched it to a couple of friends and we all had a good laugh about it and talked about the characters a lot, and then I drew a few of them and then I couldn’t stop drawing them. Like couldn’t stop. Because yeah, if Steve drew comics back then, before the ice, he absolutely would want to know what had happened to comics (and art generally) in the interim and that was weirdly compelling. Also there were probably some “feelings” on my part that I needed to “deal with,” or something. 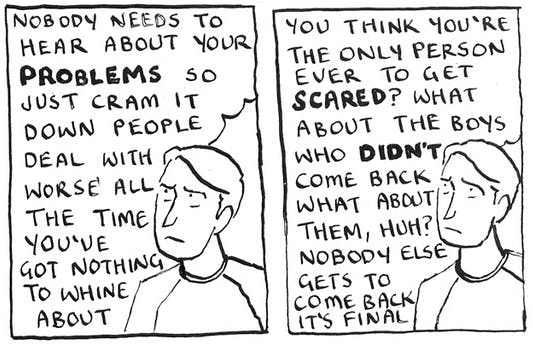 What made you decide to go this route with Captain America, of all characters? American Captain explores some pretty dark and downbeat topics that most people wouldn’t really associate with a hero that’s often perceived as being very wholesome, but the comic clearly resonates with a lot of fans—probably because movies rarely show the background neuroticism of a superhero’s everyday life.

I know this is a weird thing to say about a WWII origin story, but we’re not watching the movie in WWII, we’re watching it now. And this is a very particular character ideologically, in that he is literally called Captain America. Of course, I’m not saying that AmCap says anything particularly profound about that (beyond the obvious: the combined pressure of trauma and normative masculinity eventually makes everyone insane and a little beardy), but I do think about that. Just in my head, when I write him.

Steve has always been kind of a dark character. AmCap is really not at a massive disjunct with a lot of the earlier comics. It has less super villains, sure, but probably equal amounts of Steve wandering around internalizing angst (a good Cap, I think, is about 50 percent punching, 50 percent angst).

The other thing about Steve is that he looks like a walking Tom of Finland drawing (IRL, I mean. He doesn’t draw himself like that, and that’s deliberate on my part) but inside, he is, and will probably always be, an awkward, bullied geek. I think, personally, that that has always been a part of his character, too. Specifically the part that explains his dorky dad jokes. 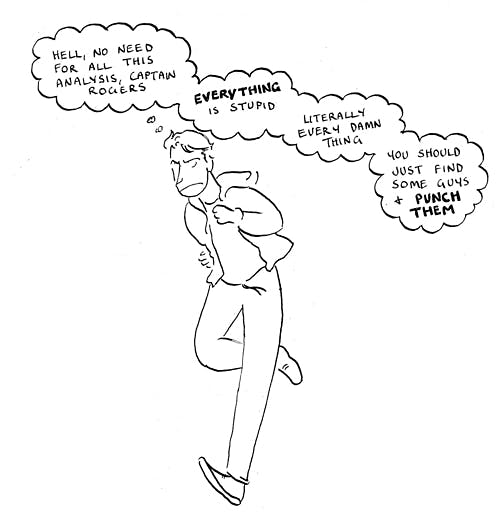 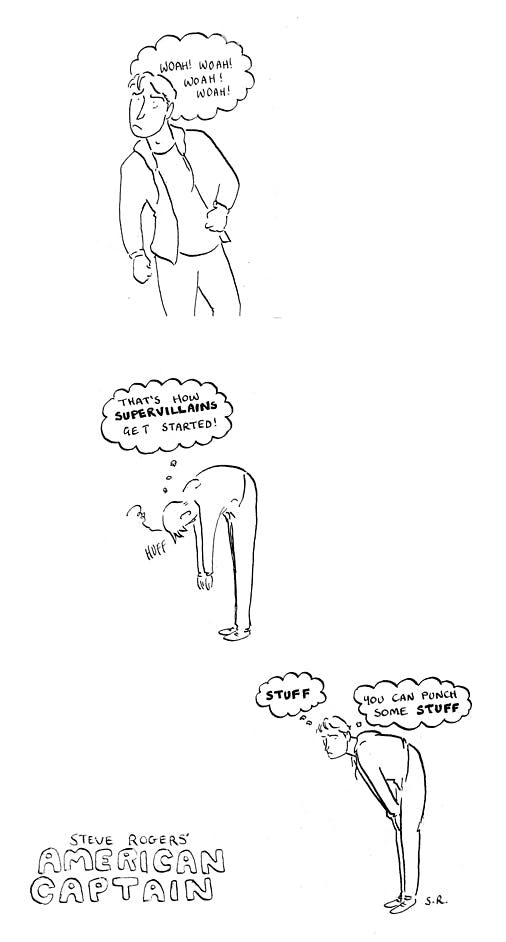 The other thing I think a lot about in writing Steve’s character is that he’s a baby. He is (given the birthdate in the comics, not the movies), what, 23 when he’s frozen? He’s so, so young to be in the situation that he is. And that’s not unusual, but it is important, because it is so often invisible. So, so often, when you watch movies about WWII, something like Saving Private Ryan or Band of Brothers, or the Cap movies, in that Chris Evans is like 32 or something, you see actors who look like fully grown adults playing all of these these roles that in real life would have been staffed by very young men. I remember a friend of mine who was an army brat pointing this out to me when we were watching something like that together, back when I was about 20 (so, you know, way back through the foggy mists of time), where he said, “That Captain would have been be the same age as you,” and it just stuck with me forever.

So I think about that with Steve, that so much of what he finds hard about the world in what I’m writing isn’t even being from the past, it’s being really young, and the confusion that comes from being that young and already having a fully established, recognized career. But it’s also that kids made the kinds of calls he did in that war, in those wars. Kids are coping with that kind of trauma. Kids who in a lot of senses didn’t and don’t have a lot of other choices, whether that’s because of their particular social circumstances, or because of culture being what it is and nations being what they are.

How close do you think your comics are to Marvel movie canon? Do you see it more as a slice-of-life fanfic, or what might actually be going on behind the scenes in the “real” world of the movies?

It’s a mixed bag. I would like it to be MCU canon compliant, just for sake of ease and interest, but I’m not wholly consistent with that, and also, it’s pretty much in “Marvel Time” (that weird, elastic duration in which you can never tell how far apart things are). At this point everything takes place between The Avengers and The Winter Soldier, and there are occasional nods to the other films. I can’t say for sure if MCU Cap would actually draw a diary comic in his notebooks though.

The most obvious ongoing theme in American Captain is the fact that Steve is constantly kind of confused and miserable about his life, which was a pretty smart prediction considering the events of the new Captain America movie, in which Steve is a very messed up guy. How much do you plan on having American Captain fit in with the new canon from Winter Soldier?

Damn, is he messed up. Wow. Damn. I think Chris Evans probably looked at a lot of photos of returning servicemen, because he Thousand-Yard Stares his way through that film like a champion.

And he was messed up in The Avengers, too. The Avengers is a weird movie that seems to try very hard to produce some kind of psychological resolution for its characters, but also, Steve is introduced by literally trying to punch away visual flashbacks to the war in which his best friend died and then he did. I’m sure he felt pretty cool after beating up some aliens in New York, but he’s introduced with an explicit visual depiction of his having PTSD, and that unfortunately doesn’t go away just because you had a victory, or because the world really is as dangerous as your instincts are constantly telling you sometimes. In fact, it’s the “sometimes” that’ll really get you.

Anyway, I’m doing a storyline leading up to Winter Soldier (which I had intended to have done before Winter Soldier came out, though that didn’t happen) and then I’m going to have to think about exactly how I’ll handle the aftermath.

Do you think the diary comics are “helping” Steve yet, from a therapeutic perspective? Or is it just a narrative device on your part?

A little from column A and a little from column B, I think. The part that’s especially helpful for him, or perhaps will be helpful over a longer term, is gradually seeing the comics as drawn by Steve, as Steve’s own weird little project. As distinct from Captain America.