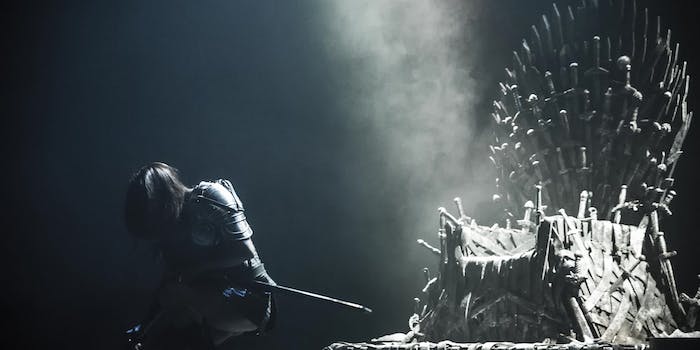 All men must buy.

It’s a double-take worthy of the Red Wedding: Without any fanfare, Amazon has quietly put the entire box set of A Song of Ice and Fire on sale for $10.

The full set of George R. R. Martin’s first five novels in the beloved fantasy series that led to Game of Thrones has already sold out in paperback at the sale price; however, you can still pick up a version in Kindle for a skinny $9.69. That’s a significant kick down from the regular paperback price of $51, much less the hardback price of $130. Not everyone, once they got over their shock, was happy about the deal:

The drastic price reduction is probably just a short-lived sale, but it’s still good news for Game of Thrones fans who are stuck in the endless wait for the sixth book in the series, The Winds Of Winter. If you’ve been waiting for an excuse to stick an extra copy of the books on your Kindle to take around with you as a memory refresher, now’s the moment.

And if you’ve been delaying reading the books, then it just got a bit harder to keep putting it off.

On Kinja, Shep McAllister noted that the series companion book, A World of Ice and Fire, is also on sale in Kindle format for just $7. In its hardcover edition, the book is a weighty coffee table tome. Amazon, despite its many, many flaws, is making it hard to resist the siren call of immediately available content on a portable platform at a ridiculously low price.

Meanwhile, fans can await the coming release of three novellas in the universe of Westeros. A Knight Of Seven Kingdoms isn’t out until October, but that hasn’t stopped fans from speculating about its place in the pantheon. A recent change in that book’s availability led some fans to wonder if it was being packaged into another new full box set release. But while there’s no indication that’s what’s happening here, we can’t help but be grateful for whatever factors have led to the sale.

What can we say? All men have a price.

Photo via thevodkacircle/Flickr (CC BY 2.0)