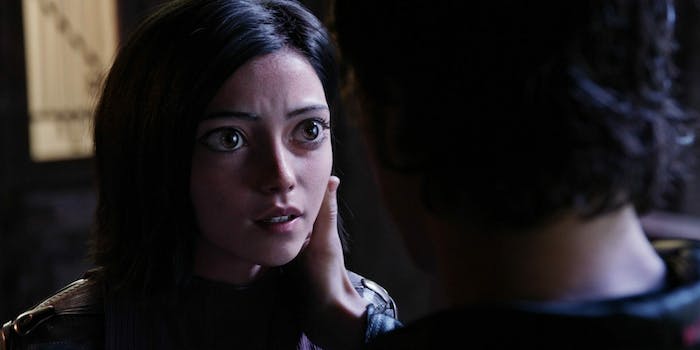 To our honest surprise, 'Alita' is a rare example of a decent American manga adaptation.

Alita: Battle Angel is one of the best Hollywood manga adaptations to date, although that’s really not a high bar to clear. Breaking a long streak of cringeworthy attempts at live action (Death Note and Ghost in the Shell, we’re looking at you), Alita is a good old fashioned teen blockbuster with likable characters and slick action sequences.

RELEASE DATE: 2/14/2019
DIRECTOR: Robert Rodriguez
With great action scenes and a lot of heart, Alita is a rare example of an entertainingly watchable Hollywood manga adaptation. Unfortunately, its overabundance of ideas are just too much to fit into one movie.

Written by James Cameron and Laeta Kalogridis (Altered Carbon) and directed by Robert Rodriguez, Alita takes place in a familiar kind of dystopia. Following an apocalyptic war, most humans now live in a cyberpunk city clustered around a giant garbage dump. They scavenge and work for an invisible upper class; a conglomerate of overseers who live in the unreachable flying city of Zalem, throwing their trash down to the world below. Commoners compete for the near-impossible dream of migrating to Zalem, where they’ll presumably be on the lowest possible rung of the social ladder. As one character points out, is it really better to serve in heaven than rule in hell?

We meet our cyborg protagonist Alita (Rosa Salazar) in the garbage dump, where Dr. Dyson Ido (Christoph Waltz) unearths her detached head among the debris. Like the heroine of Ghost in the Shell, she’s an augmented human brain in a robotic body. Ido rebuilds her with a new torso and limbs, and she wakes up as an amnesiac teenage girl. She’s literally a wide-eyed innocent, CGI’d to look like a photorealistic anime character with inhumanly slim proportions and gigantic, shimmering eyes.

This was a puzzling choice from the start, resulting in trailers where the main character’s face was laughably distracting. Alita’s Uncanny Valley appearance is easier to accept in the actual film, but it’s still a bizarre interpretation of a very common manga art style. You have to wonder why Cameron and Rodriguez did it at all. In a world full of cyborgs, Alita is the only one who looks like a cartoon character—and no one ever comments on it. She doesn’t even get odd looks in the street. When you consider the backstory for her appearance, the whole thing feels even weirder. Once Alita regains some of her memories, she realizes that she used to be an elite supersoldier. In other words, some engineer intentionally designed a killer cyborg to look like a skinny teenage girl with cute anime features. What a weirdo.

Thanks to the often creepy trend for naive-yet-deadly female action heroes, I had some reservations going into Alita. Overlapping with the “born sexy yesterday” trope, these heroines have uncomfortable undertones, simultaneously vulnerable and childlike, lethally dangerous, and conventionally attractive. (River Tam in Firefly and LeeLoo in The Fifth Element are two famous examples. Perhaps it’s just coincidence that both of their creators were later accused of preying on younger women.) Alita follows this route at first, reacting to everything with the childish delight of Ariel in The Little Mermaid. But once she remembers her supersoldier training, things begin to change. It gradually becomes clear that she isn’t an amnesiac badass designed for the male gaze—she’s an archetypal YA heroine.

Alita is pretty gory for a PG-13 (apparently cyborg deaths are more kid-friendly than human ones?) but tonally, it’s a teen movie. Alita’s personal life revolves around three things: her overprotective new dad, her cute love interest Hugo (Keean Johnson), and a gladiatorial rollerblade sport called Motorball. The actual plot is about Alita regaining her combat skills and clashing with representatives of the ruling class (a beautifully costumed Mahershala Ali and Jennifer Connelly), but really this is a YA adventure whose heroine gains confidence while excelling at sports and hanging out with her crush.

It’s not as wacky as Jupiter Ascending, but Alita: Battle Angel has the same teen girl sensibility and upbeat tone. When Alita embraces her superhuman strength and agility, it’s fun. She’s excited to discover this new part of her identity—and her capacity for violence doesn’t turn her into a gritty antihero. She’s still an open-hearted optimist with the emotional sophistication of a high school kid.

Drawing from a nine-volume manga, Alita is kind of overstuffed. Rodriguez does great work with the motorball action scenes and Alita’s coming-of-age story, but there’s too much extra material for this to be a coherent political narrative like The Hunger Games. On top of Alita’s arc and the class divide between the two cities, we have a cyborg bounty hunter subplot, an elaborate backstory involving interplanetary war, and a barely-examined racism allegory between cyborgs and humans. That last part needed a bit more depth, because there’s a lot going on within Alita’s cyborg worldbuilding.

This is a world where many working class people have low-quality replacement limbs, where athletes get drastic surgical upgrades to escape poverty, and where bounty hunters transform their bodies into killing machines. Arguably it’s a story where most of the main characters are disabled and use prostheses, but the action scenes involve their bodies being torn apart for our entertainment, with no examination of how traumatizing this would be. And judging by a few throway lines from Hugo and his street-smart friends, there’s a social divide between cyborgs and people with fully-human bodies. So, like I said: There’s a lot going on. It’s not surprising that Alita: Battle Angel can’t quite tie it all together, rushing toward a final act that’s clearly a set-up for a sequel that may never come.