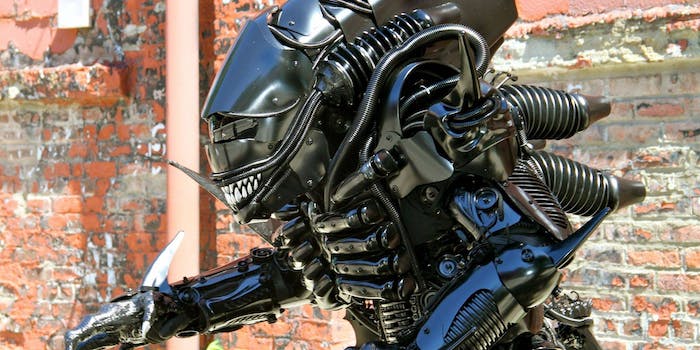 How to cosplay as the ‘Alien’ xenomorph

Take a closer look at the work of these excellent ‘Alien’ cosplayers.

The creature H.R. Giger created for the Alien franchise is one of the most iconic monsters ever made for film. Even just its silhouette is enough to send shivers down your spine.

Of course recreating the details of Giger’s other-worldly design can be intimidating to even the most experienced cosplayer. But if you’ve always dreamed of creating your own xenomorph costume, there’s no better time to start than the franchise’s brand new holiday.

There are already some pretty stunning takes on the costume out there for inspiration. Take the costume called the Brooklyn Alien by Peter Kokis of Brooklyn Robot Works. Kokis is known for his impressive robot creations like Optimus Prime and the Terminator. He told the Daily Dot via email it was a no-brainer for him to create his own version of an alien.

“The brilliance of H.R. Giger’s biomechanical designs deserved to continue to live, and the challenge of building a character that wasn’t a robot couldn’t be resisted,” Kokis said. “I wanted to make something that freaked people out: the xenomorph, jet-black and monstrous, snarling teeth and claws comin’ at you. I knew his head would be a tremendous challenge.”

Kokis planned his xenomorph far in advance, taking 16 months to find the parts he needed. This design required a different mindset for Kokis, who typically worked with mechanical and angular robot shapes. To remind himself of this, he had a sign stating “He’s NOT a Robot!” in his workshop. In total, it took him 450 hours to then construct the alien. 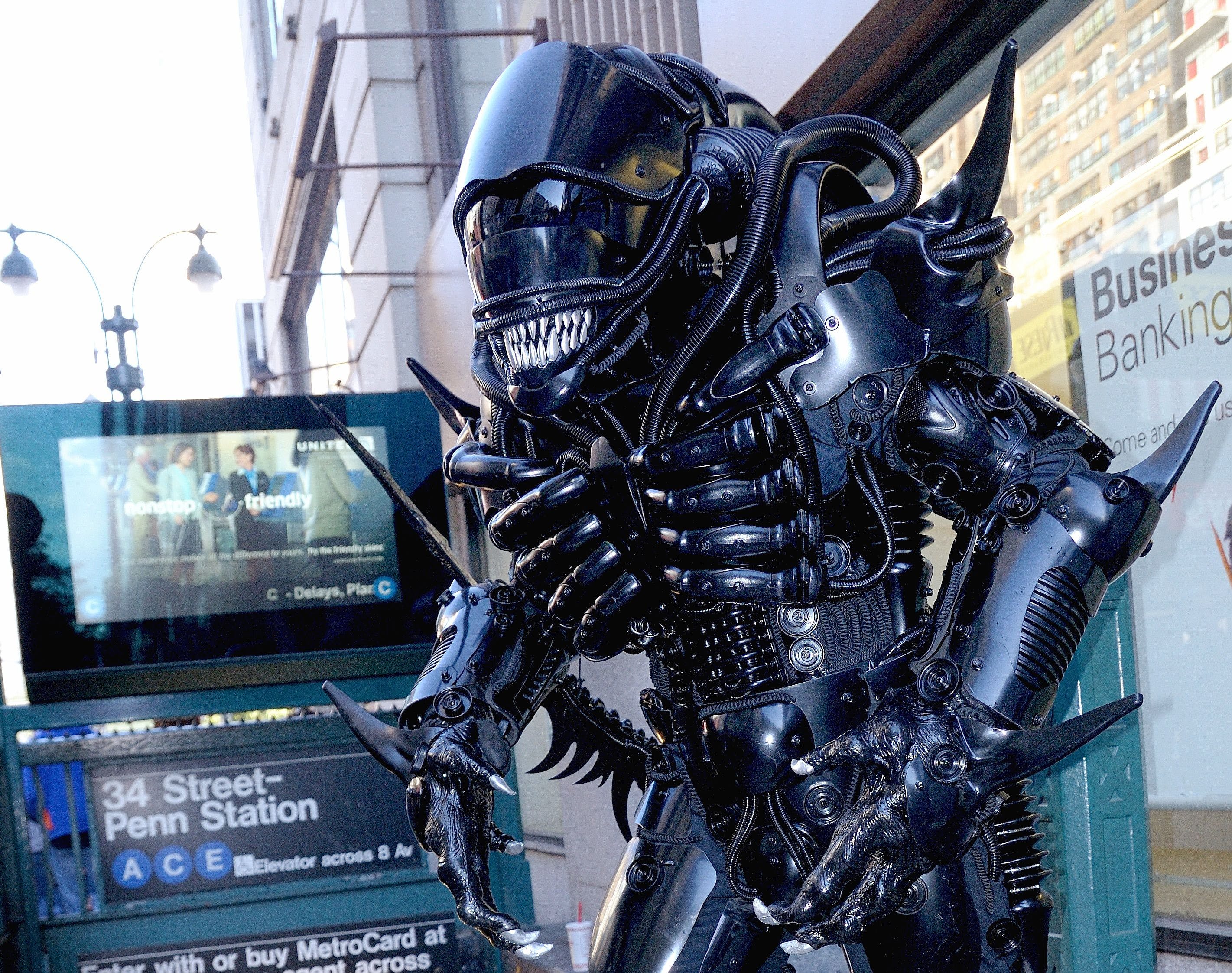 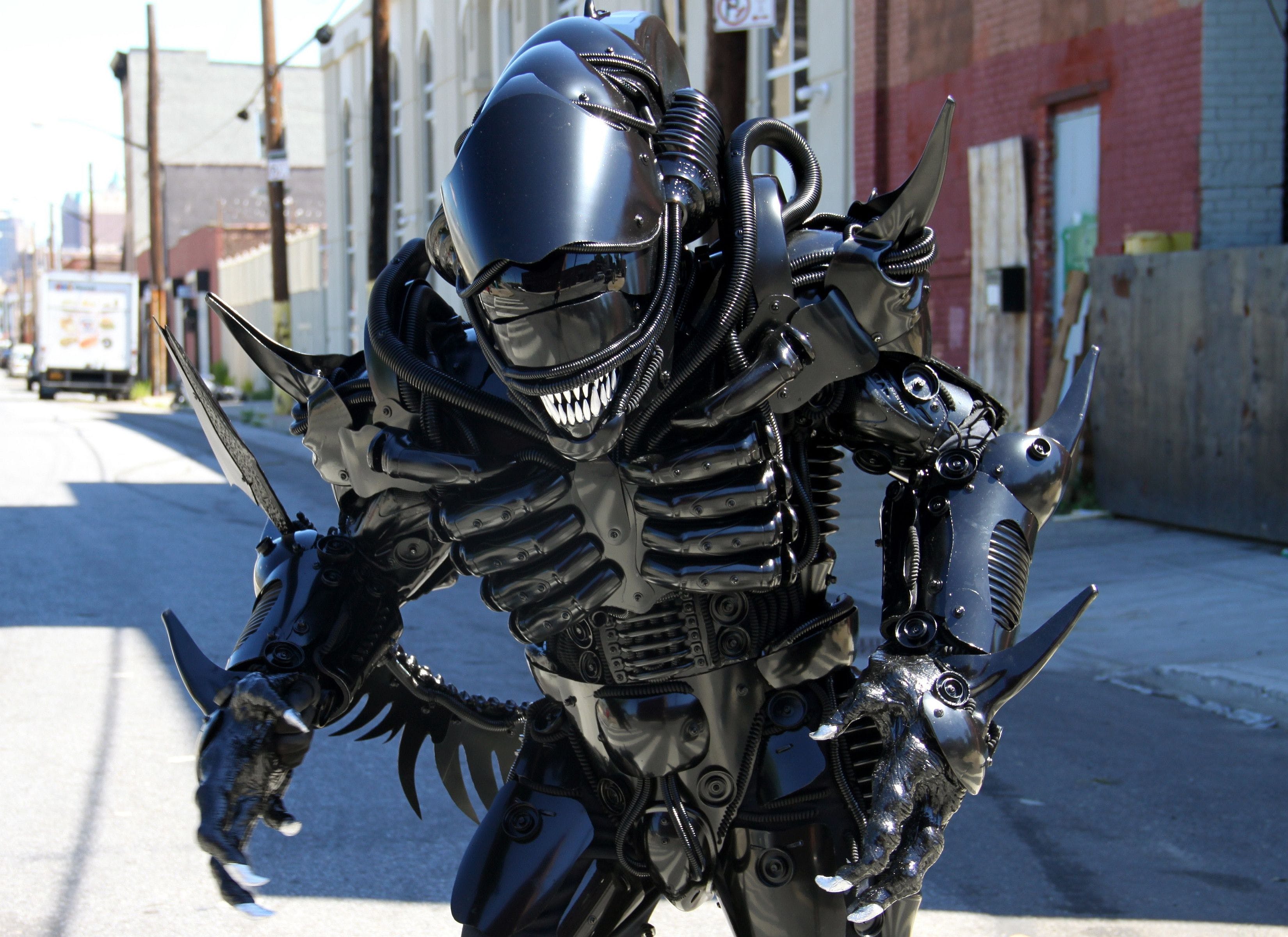 “I’m a former military pilot, and I build my exoskeletons as you would an aircraft, modular and with lots of redundancy. My guys are built to last,” Kokis said. “So, every character starts with his hands and then I work my way up his arms. Then, his feet and up his legs.”

The torso for all his projects usually tricky, and the xenomorph was no different.

“His torso was tough: I went through piles of stuff before I found the perfect objects to create his breathing tubes, ribs, collarbones, and sternum,” Kokis said. “I wanted the same shapes and parts to occur throughout his body, a uniformity that you often find in nature.”

Kokis said the head was the true challenge when creating the costume.

“I found the right-shaped trashcans for the length of it, but his jawline and teeth were crucial. What makes the xenomorph so creepy is its lack of eyes, so I had to design a way for me to see that was seamless for someone standing next to me,” he said. 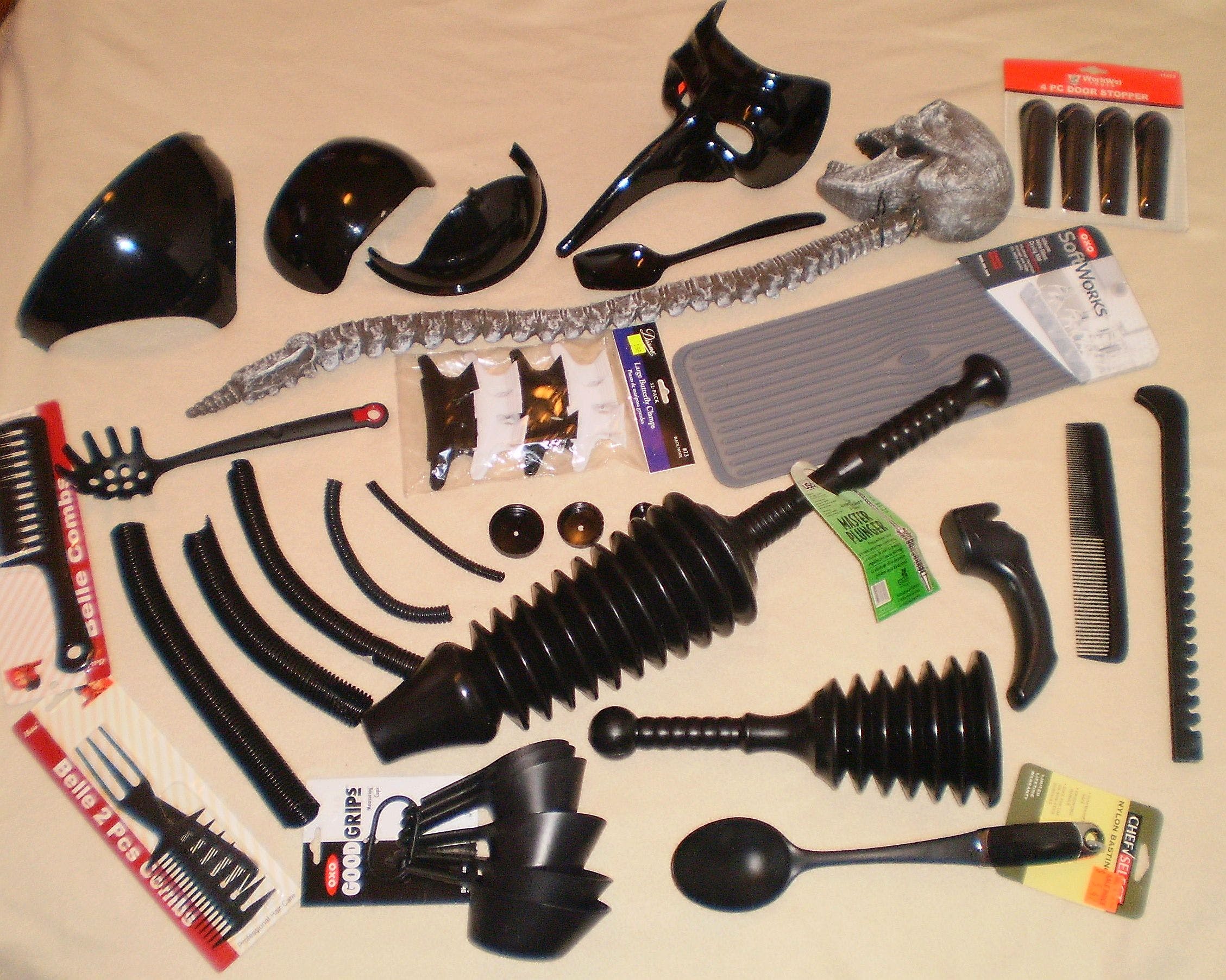 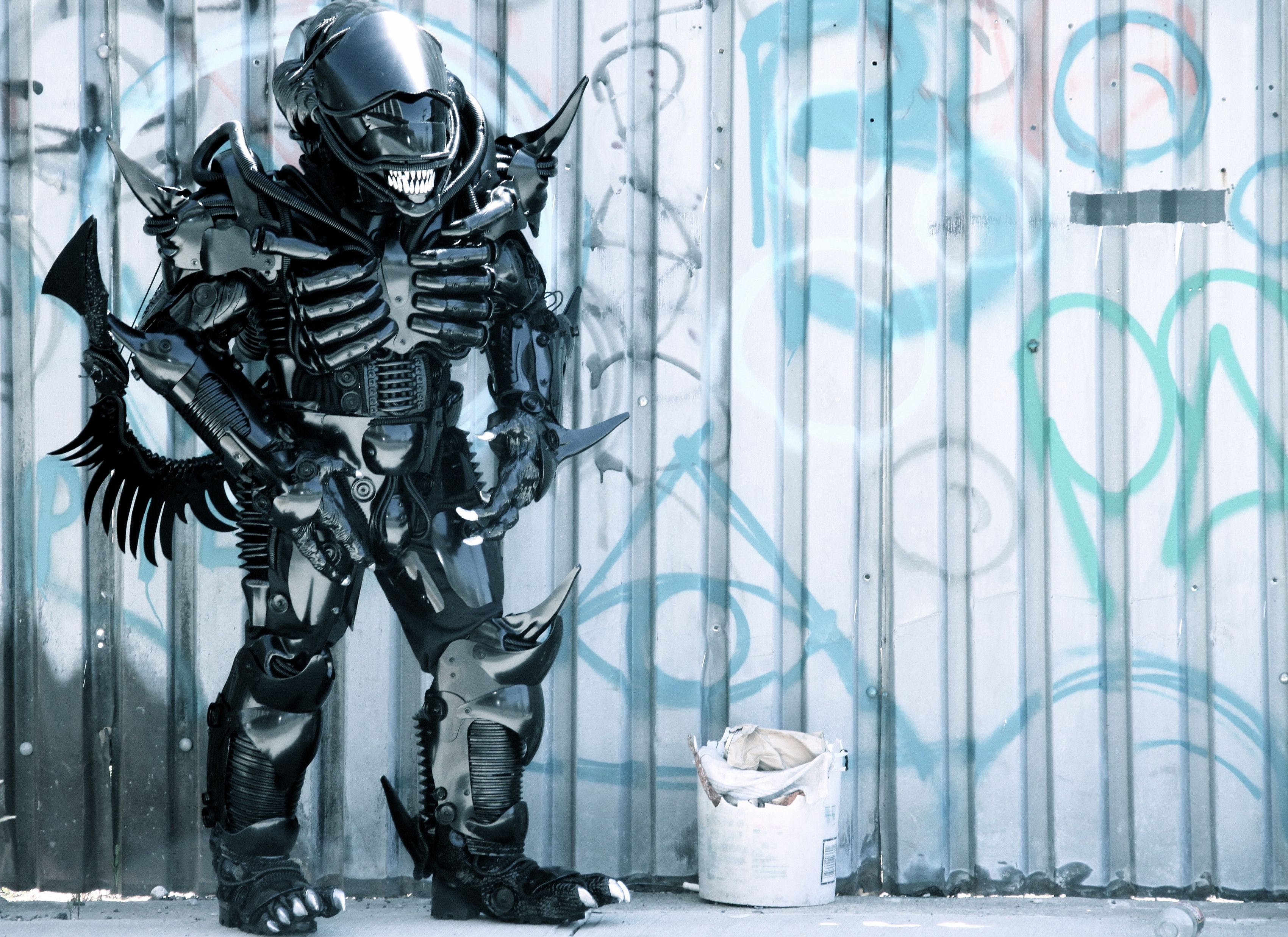 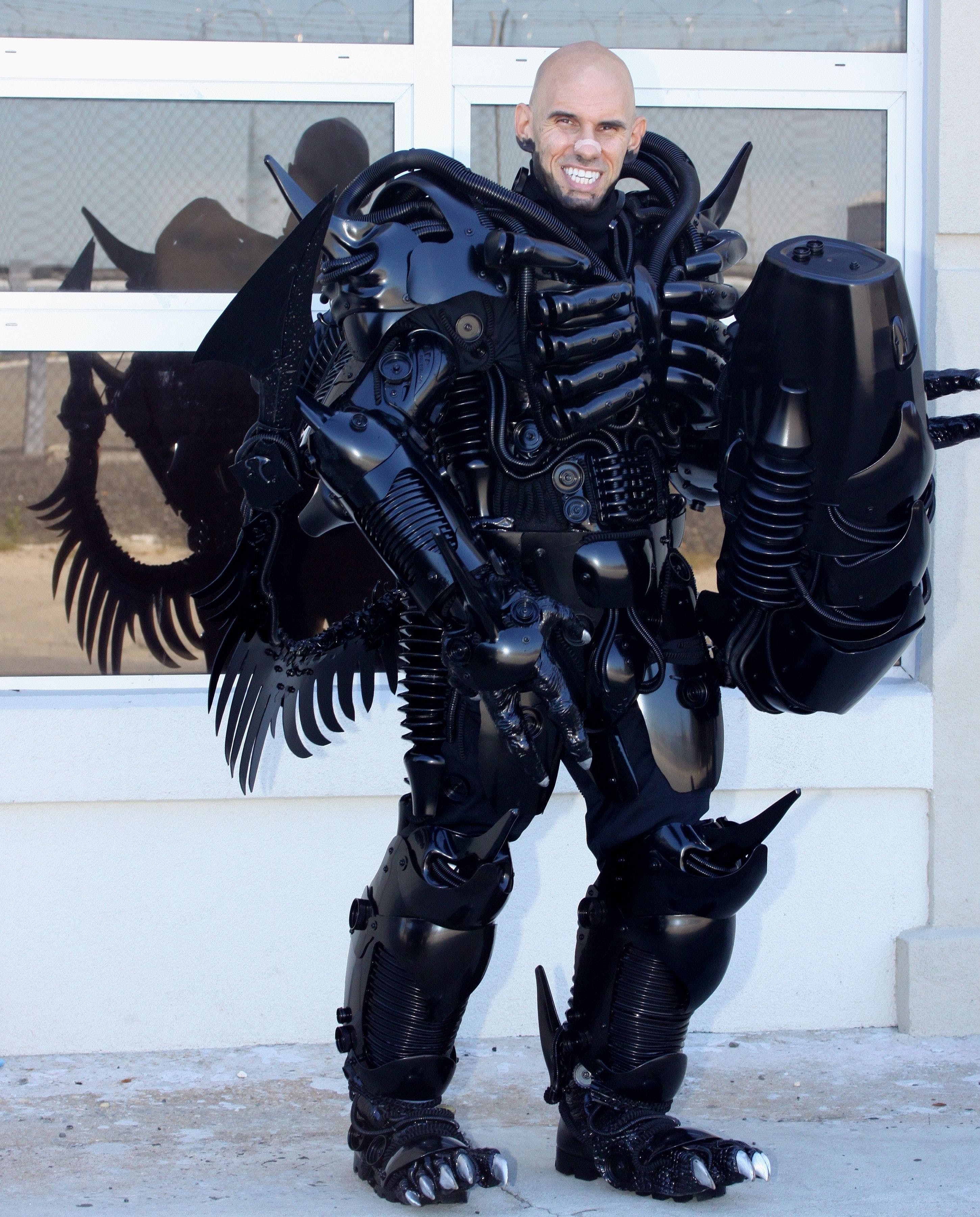 The impressive Alien cosplay created by Henrik Pilerud of Pilerud’s Cosplay took almost as much time: 300 hours over the course of six months. Pilerud told the Daily Dot in an email interview that like many of his costumes, creating this one was “a childhood dream coming to life.”

“I have admired the design of the alien monster since I was young and I used to draw pictures of it. Making the costume was me taking it to the next level,” he said. “The xenomorph, as the creature is called in the movies, is still to this date the most beautiful/scary creature ever made for a film.”

Pilerud started cosplaying about five years ago to fulfill another childhood dream: becoming a Star Wars stormtrooper. Now he’s a member of the costuming group The 501st Legion. He cosplays for the fun of it, the creativity of making something, and the smiles the costumes get from people. But he especially appreciates the contributions cosplayers make to charity organizations that give the hobby “weight and a higher purpose.”

To create his alien, Pilerud started with research. He looked at other costumes on the Replica Prop Forum and used Neka’s alien action figure as well as the book Giger’s Alien for reference. To construct the cosplay, he used a number of materials including fine grain styrofoam for the head.

“The other ‘hard parts’ of the costume are made of foam similar to sleeping pads, usually called EVA foam. Basically I ‘sculpted’ in foam, with tools like a Dremel and similar. Based on the reference pictures of the original. And a lot of glue … All the hoses that cover the costume [were] electrical wire hoses just like they used when sculpting the original. However, with my costume it remained styrofoam, foam, and plastic hoses in the final costume, and was not molded and cast in latex as the original.”

Pilerud agreed that the head was the most challenging part of the cosplay construction, in part because he had to shape it based on low-quality reference images. The tongue/second protruding mouth was another challenge.

“I got some suggestions from a friend that had some experience working with servos. Mounting the tongue on a telescopic arm, and placing the servo in the back of the head, connected via a wire [that] pulls and pushes it in and out,” he said. “[It’s] triggered by a button I actually press with the tip of my own tongue. It is basically a tongue-operated tongue.” 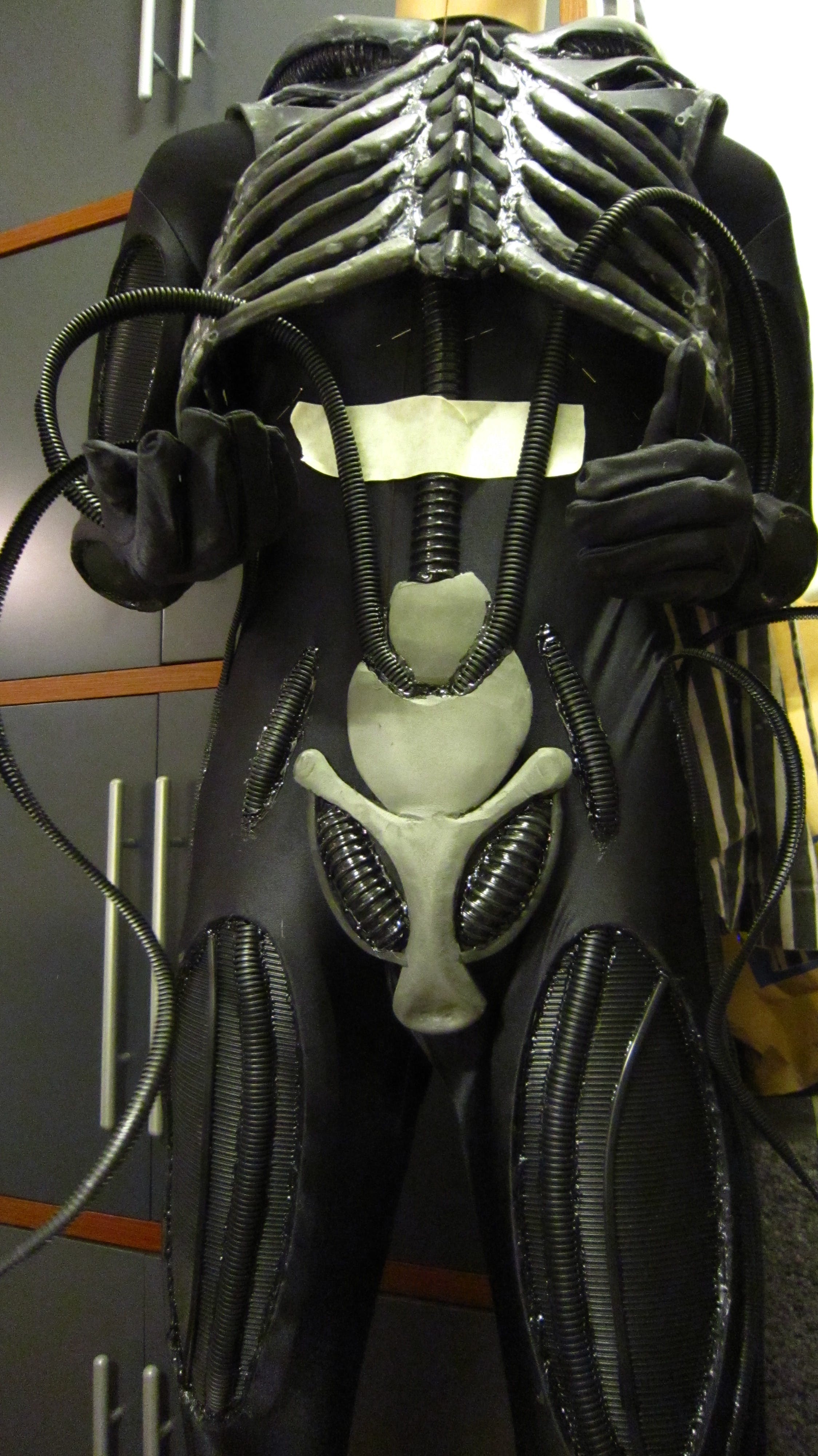 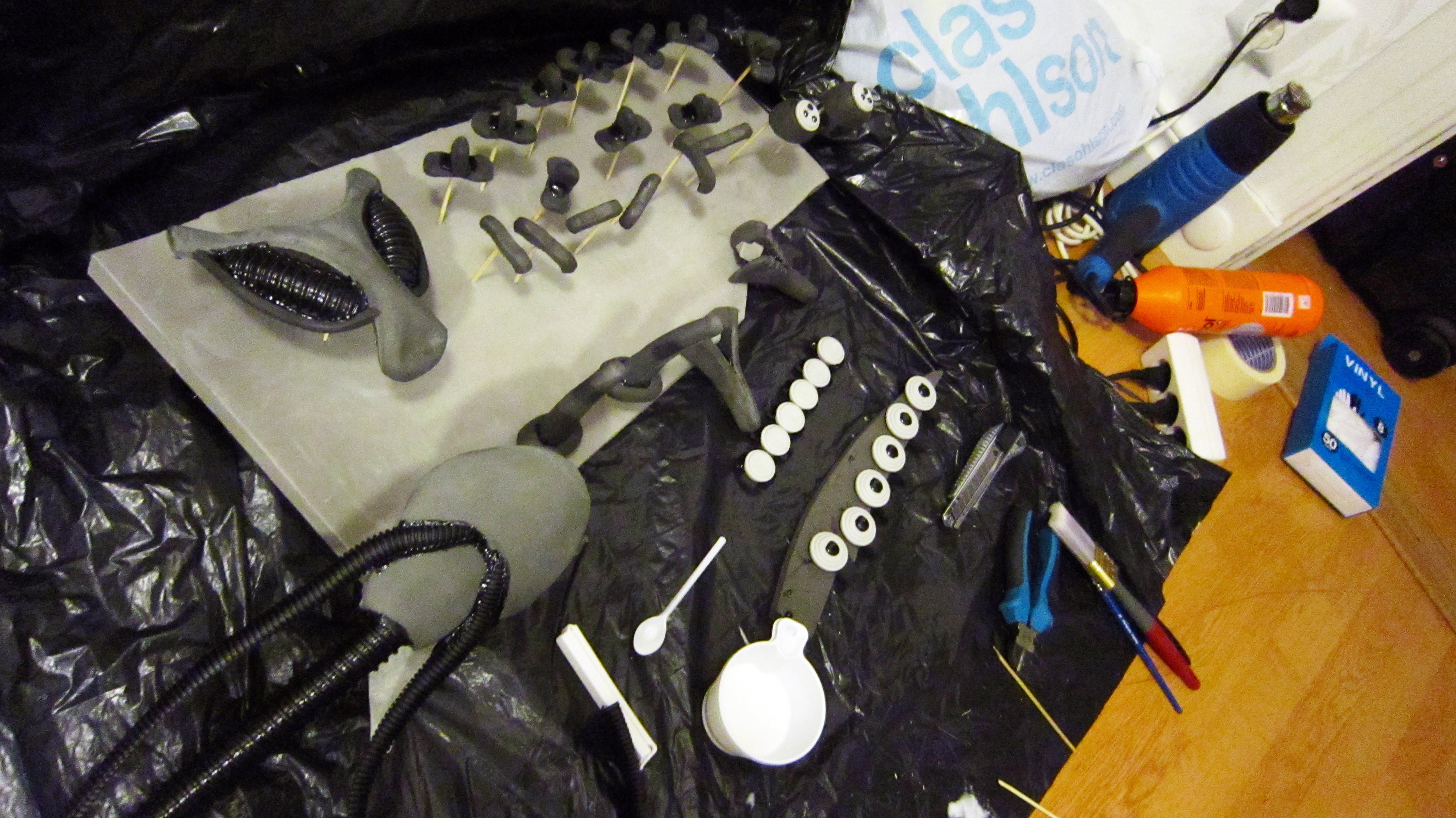 The end result is an amazing cosplay that, along with Kokis’s project, might seem as intimidating as it is inspiring. Don’t let that deter you though! Kokis points out that unless you’re doing this for a living like him, there’s no need to spend almost 500 hours on a costume. He suggests focusing on the head, chest, hands, and feet of your xenomorph and remembering to pay attention to what the back looks like since people will take photos even as you’re walking away. While he works a lot with shapes found in everyday materials, he recommends using EVA foam as an easier option.

“Above all else, have fun and don’t take yourself too seriously. You’re dressed up as an Alien monster, after all,” Kokis said.

Pilerud recommends cosplayers pay close attention to their reference pictures and compare what they’re doing to the original. He also suggests beginners test things out.

“For each material, glue, paint and so on. So you don’t ruin your actual costume by mistake. That saves a lot of time too,” he said.

You can see more images of Pilerud’s costume and the steps he took in constructing it on his Facebook page. Kokis also has a whole page about the construction of his costume on his website. There are more step-by-step guides you can find online to help you create the xenomorph of your nightmares. On Instructables there’s a detailed 17-step tutorial for an impressive alien costume created by an artist from upstate New York. It helpfully lists all of the items you’ll need to make your own while including lots of photos of each step for reference. Other tutorials on the website provide some twists on the idea, whether it’s a child version or a fancy alien queen ready for a cocktail party.